Before I start telling my little story I need to point out that Good Old Mr. Wilson is a character from the comic strip “Dennis the Menace.” The USA version. Like so many other things, there is a totally different version of “Dennis the Menace” in the UK and probably in the British Commonwealth. The British “Dennis the Menace” is a sociopathic monster. We’re going to ignore him. The American one is merely five years old. Perpetually.

He likes to hang around his friend, the sixty-something Mr. Wilson. This friendship has been explored as an American cultural icon, trope, meme or whatever, for over fifty years. It’s part of our world. It is, I think, a true reflection of a simple reality. Old people and little kids get along well. They both share a lack of hormones. They both spend money at a very low rate. They have similar ambitions–to get a year older.

Old people are often accused of disliking children. Nothing could be further from the truth. Old people love children and children know this and know that it makes old people into easy marks. This leads to the universal parental complaint that the grandparents are spoiling the children. It also explains the fact that although Dennis is a source of endless frustration for Mr. Wilson, Mr. Wilson never tells Dennis not to come back. Well, if he does, he doesn’t mean it. You see, it’s not children that old people don’t like.

We love children. Since I have no children I’m not going to have grandchildren except in the form of “surrogates” borrowed from neighbors and friends. My “Dennis” is the son of my best friend. He took an altogether avaricious interest in my model collection as soon as he saw it. I gave him an “easy build” kit but I built it (of course) while he watched. The age of five is the age of watching–like a big cat. Waiting for the adults to drop their guard.

I decided today to build a model specifically for him. I just tore open the worst kit I own, the deplorable Revell (formerly Matchbox) Mystere IV. The quality of the kit is just bad–even the instructions have a “who cares” vibe about them. Here’s the photo from the instructions. 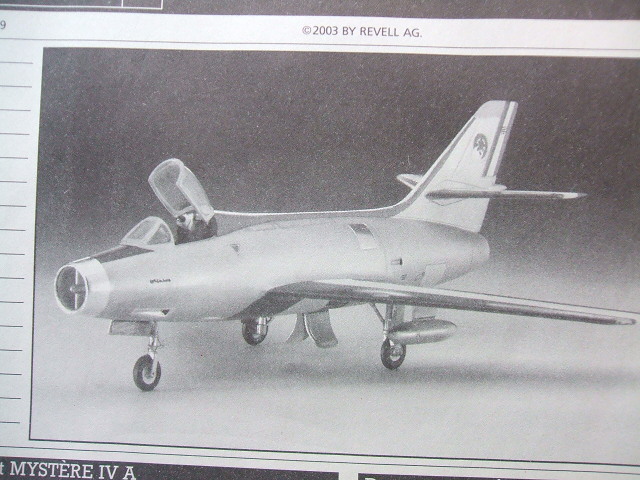 Sheesh. The canopy on a Mystere IV does not open like that. It slides back. And the inner gear doors don’t hang down like that. They close after the gear lowers.

Anyway, having built this nasty kit twice before I decided to build this one as a toy for a five-year-old and just let my muse take me. I started building and tried to get the whole thing done in three hours, start to finish, because in 3 hours “Dennis” would be arriving and then I intended to hand it over to him with the admonition “break this.”

What I ended up with at the end of three hours was not like anything I’ve ever built before. I just started putting things together with super glue and filling gaps with this stuff:

You smear it on with a finger and smooth it out and you can paint it immediately. The art world has Klingon technology and if you’re smart you’ll get familiar with it.

After about four hours of rush-building, I had this: 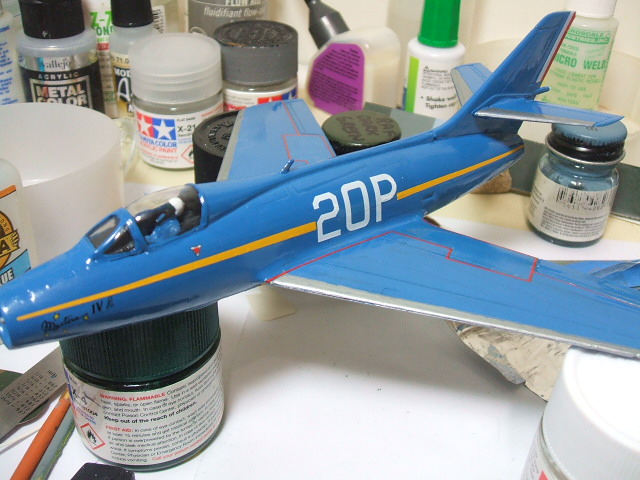 The blue is good old Badger Model Flex Conrail Blue. The “silver” on the wings and tail is a silver Sharpie, drawn using a straight-edge. The white decals came from a Microscale sheet and the yellow is yellow decal material, cut with a hobby knife and straight-edge.

This is a proper toy. It’s gear up and has a pilot inside the cockpit. To fly the plane. Of course. After several coats of Future is should be good to go. It doesn’t represent an actual aircraft. At all. It’s a “what if” civilian-owned airshow bird. A popular aircraft at airshows all around Europe.

And popular with “Dennis,” too, I hope.