Mixing colors for painting models of military subjects is a dark art–but not too dark. I’m going to present some introductory information here, in the hope that some enterprising model builders may take this information and build on it.

Let’s start with the basics. The colors of World War II subjects can be inferred–yes, I said inferred–from one basic fact: that the pigments available for use in paints back in those days were white, black, yellow and red. Not blue. If you add blue to that list, you have all the primary pigments and you can mix any color in existence. You take blue away–which we can do because blue is not as easily obtained as the other pigments, especially in wartime–and you get “military colors.” I say again–by mixing white, black, yellow, and sometimes red you get all the colors of the MILITARY rainbow.

Here are our basic colors You’ll need to order these colors off of eBay (probably) in order to get these “pure” colors. The red is the biggest problem. Black, white and yellow can be obtained from most Testors paint dealers. Red, on the other hand, is a problem. The color I use is “Bloode Red” from the discontinued Testors Fantasy Acryl line. 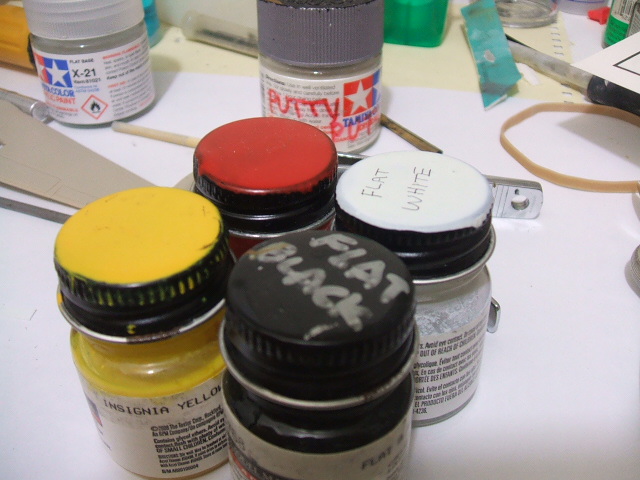 Now, this is a very brief intro to the subject. I’m not going to bore you or attempt to destroy your mind with a lot of techno-babble. Bear with me on this.

To start off, we’ll put ten drops of insignia yellow into a bottle. 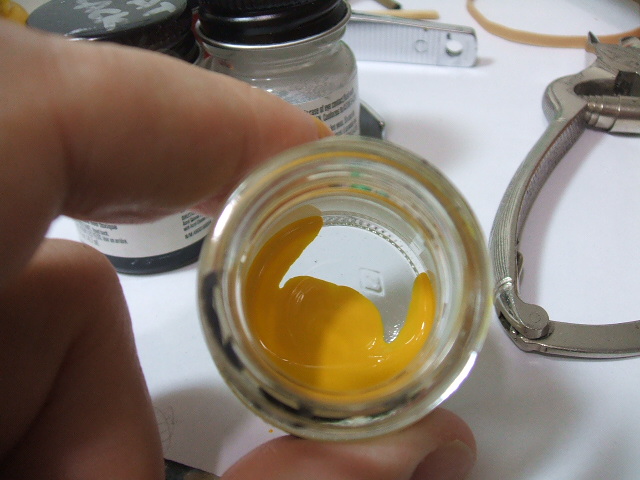 Then we add ten drops of flat black. 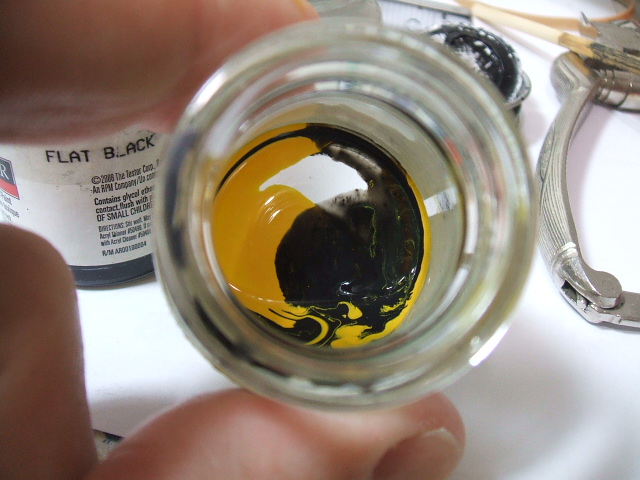 What color is this going to make? 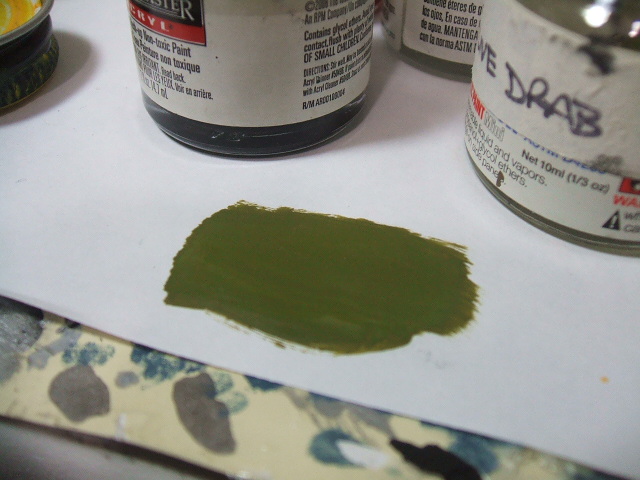 A nice, military olive green. That’s what it makes. I’m not trying to fool you. Try it yourself. This is the basic “army green” color. Used by GI’s everywhere to paint stuff that they don’t care about because the sergeant told them to. 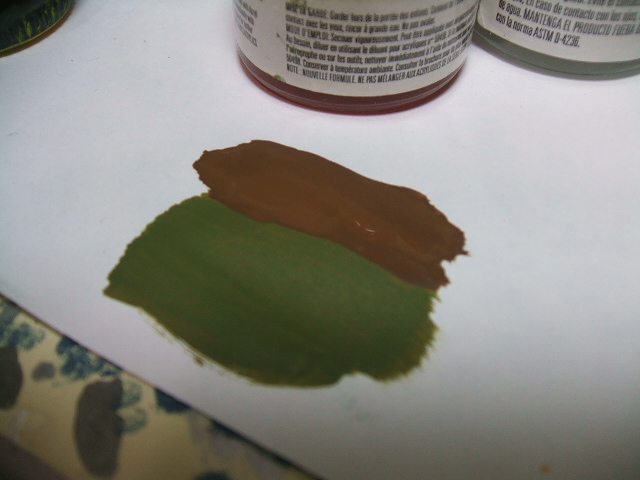 Earth Brown Number 57/21 by General Order 11. In other words, if you want to paint a lot of stuff brown and green, get some cans of yellow, black and red paint and mix ’em up.

Let’s see what happens when I mix the brown and green. 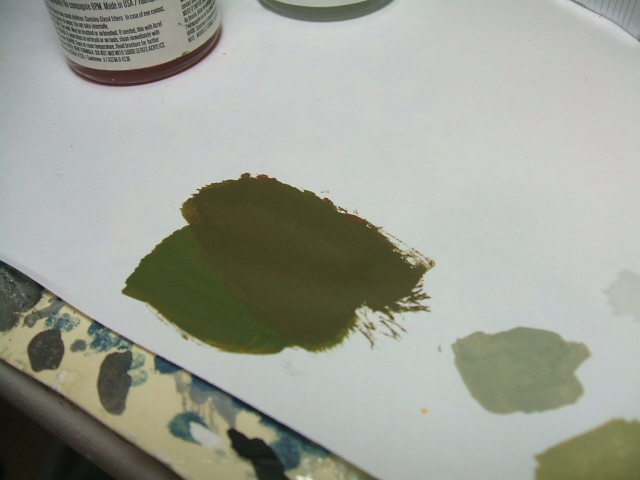 Olive drab. All I did here was just take the brush and mix it up.

Let’s add some white. Ten drops of white plus one of black and one of yellow. 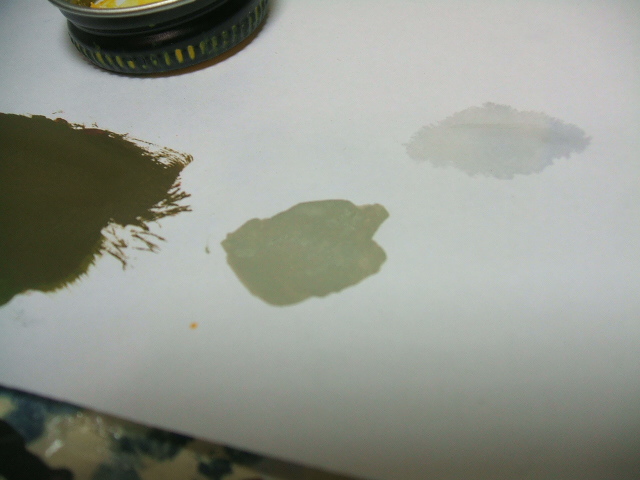 I dunno. Looks kinda RAF to me. Let’s add another drop of yellow to this. 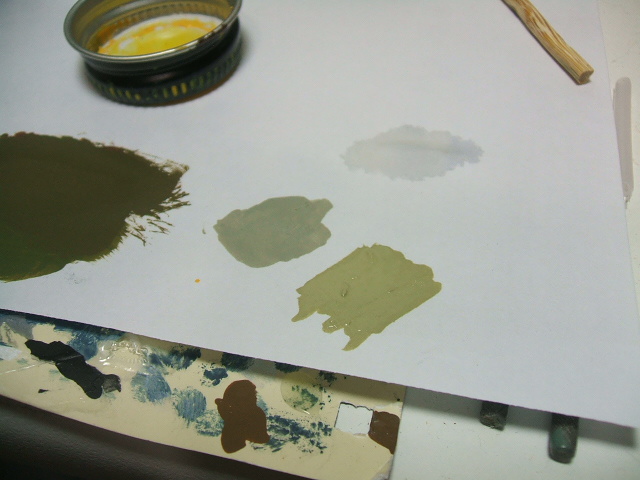 Getting into “sky” territory now.

Is the light beginning to dawn? Basic colors applied to military equipment was often mixed using what was available IN BULK. Black. White. Yellow. Red. Black from charcoal. White from lead. Yellow from clay. Red from rust.

You can’t go far wrong with a military color from World War II if you stick to these pigments. It’s when blue is added that things go south. Blue was a pigment that just wasn’t available in quantity to most of the world at that time– and even if it were available, why use it when much cheaper alternatives were available?

Only the U.S. Navy can answer that question. They, of course, used a lot of blue.

2 Replies to “Introduction to Paint Mixing”