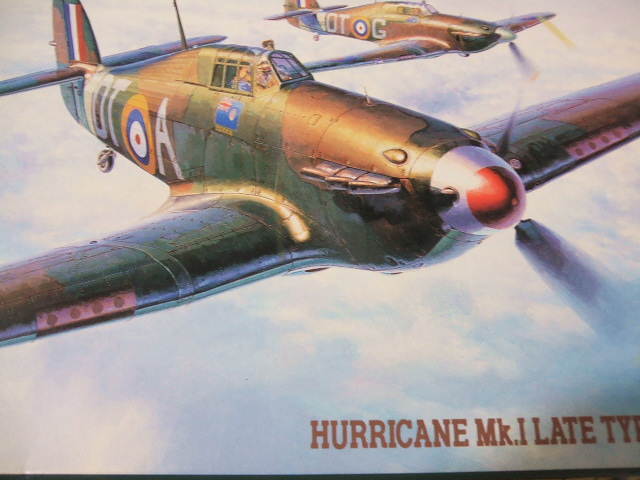 My adventures “researching” the Hasegawa Mk. I Hurricane (which was discovered, after much research, to be a fake) caused me to learn something about wartime Hurricanes. I learned about the propellers, in particular, but also about the introduction of the Merlin XX engine and the fact that the improved engine (which lengthened the nose of the aircraft) allowed this old war horse to soldier on after other designs from the same period were retired.

But model building has always been a learning activity for me. As a child, I assembled Revell, Hawk and Monogram kits that laboriously spelled out the name of every part. Landing gear shock strut. Port aileron. Horizontal stabilizer. Radome. The names of these aircraft components were poetry to me. I found memorizing the parts of an airframe to be not only entertaining but therapeutic. I found solace within the confines of a Revell instruction sheet (with 3-view drawing!).

As I grew older, I began to look beyond the instructions and found spiffy collections of drawings and opinions laced with facts in model building magazines and publications like Profiles. Then, as I actually grew OLD (as opposed to “old-er”) I began to ask deeper questions. Better questions. More questions.

I began to question the role of the “profile artist”–who seemed to exist for the purpose of acting as a way for model builders to avoid having to do research themselves. “I built the model from a profile. I just assumed the artist knew what he was doing.” (Note the word “artist” and the way the model builder assumes that a grown-up “artist” is probably right. How embarrassing.)

I began to question the kit makers themselves after entering the world of corporate work and finding out that the entire system is crooked as a dog’s hind leg (as my pappy used to say). I found something other than a thrill when I climbed that hill marked “Italeri Bf-109F” and found fraud, waste and abuse so transparent that I had to wonder if the perpetrators assumed that Americans wouldn’t smell anything fishy because they don’t speak Italian. (For god’s sake, they put the landing gear too far outboard but correctly located the wheel wells, and this made the struts too short so they increased the diameter of the wheels to raise the model up and give it the proper sit!).

Oh my. What a tangled web we weave. I’ve been doing “better” research since I started to record my builds online over at the Airfix Tribute Forum. I try to “verify” what I can with actual documentation, and in doing this one simple thing I have managed to learn a great deal about World War II aviation. Unfortunately, I’ve also seen an amazing quantity of truly breath-taking chicanery accomplished for reasons that are nearly incomprehensible. After all, why do they make stuff up? Why not just say you don’t know, instead of inventing something?

Oh well. The question for today is not about the evil that men do, it’s about learning. Is model building still a good way to learn about aviation? Well, the instruction sheets are terrible now. Truly, I would never have started this hobby as a kid with these awful instructions. But hey, maybe I’m just a little stupid? Anyway, the thing is that an adult can learn a great deal about the history of aviation from model building. Not everything–not by a long shot–but a great deal. If you combine model building with computer flight simulations you can really learn about aviation and the history of aviation in general. It’s fascinating stuff. Not the same as actually learning to fly, of course, but you’ll learn a lot.

Just be prepared, as you do your research and discover the hidden realities of human flight, to be disappointed as well as enlightened, from time to time.

1 Reply to “Is Model Building a Good Way to Learn?”