Vallejo Model Air is good paint for brushing and I could probably learn to use it for all my work–if I had to. But first, all the Testors Model Master Acryl and Tamiya Acrylic paint would have to disappear from the market, and I’d have to test the new Mission Models paint to make sure it wasn’t better than the Vallejo product. I’d also have to eliminate all possibility of finding a source in the U.S. for Xtracrylix.

So…it’s not likely to happen. But, in some places, for some people, this paint is the only game in town and that’s not such a bad thing. The real drawback with the Vallejo paint is its syrupy, sticky consistency that defeats brushpainting unless you can figure out how to make it less sticky. It’s not unusable (like Vallejo Model Color) because it’s thinner. Let me rephrase that. It can be used due to the fact that it is thin. The thinness of the paint makes it possible to brush it on. If you thinned Vallejo Model Color this much, in an attempt to use it for brushing, it quite literally BEADS UP on the surface of the plastic. Of course, one could spray on a primer but do I really have to explain why that is not allowed here?

Here’s a coat of MM Acryl/ Polly Scale mix (they’re the same paint for my purposes) on a “test subject.”

After ten hours, I took my thumbnail and attempted to peel it off of the plastic. How well you do this depends upon how much time you have spent peeling Budweiser labels off of bottles with your thumbnail.

All I managed to do was create some shiny spots. It you hold the test subject in the light at just the right angle you can see them.

Now, this very good adhesion isn’t universal and I don’t guarantee that you’ll get the same result. Here is another test subject where I was able to use my Budweiser label skills to better effect. It took some effort, but I was able to remove some paint. 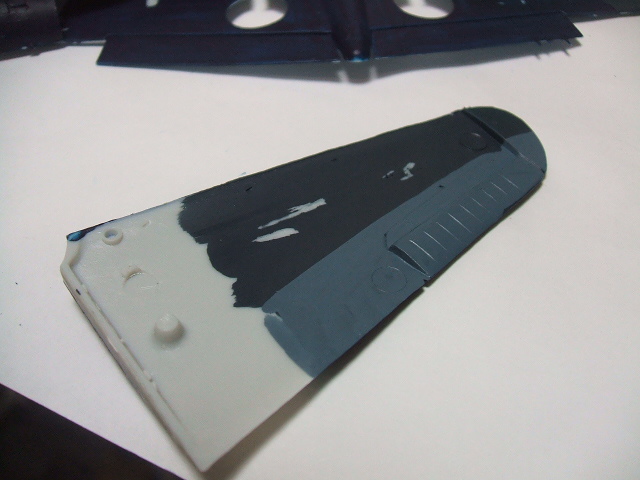 This is the MM Acryl/Polly Scale paint (above). I can be scraped off, but it ain’t easy. This is after ten hours of “curing.” Now let’s take a look at the Vallejo product after about 36 hours of curing (below). 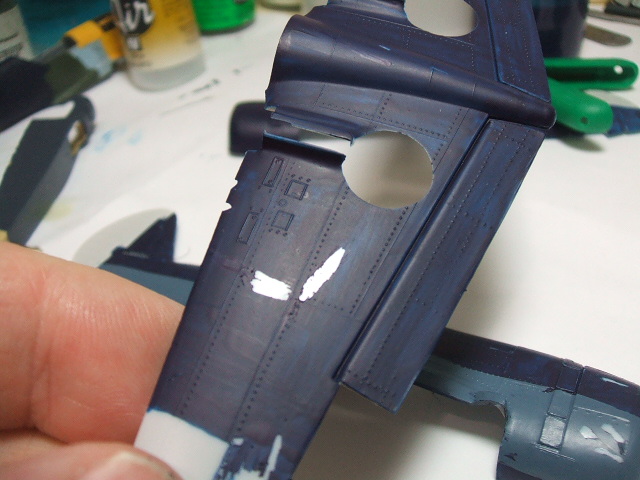 I can scrape it off fairly easily. Not super easy, but it can be done. Now, if you are a science guy and like numbers and such, you’re probably wondering what all this nonsense is about. After all, it’s just a bunch of hoo-ha and seems to be entirely subjective. No measurement.

Yes. That is true. Based on my subjective, thumbnail sketch of the adhesive properties of Vallejo Model Air, I’d say it acceptable. It might even look good until you see some paint (MM Acryl) that actually has good adhesion. It’s all relative. Because I do not use masking tape (hardly ever) I’m not too concerned about it. But if you mask, you might want to consider this.

“Subjective” is not a word that is used to build confidence in a source of information. All I can say is that I know that the paint I use (MM Acryl) is better. It “paints on” better. It adheres better. It’s better paint. So much better, in fact, that I’ll probably never buy another bottle of Model Air. That doesn’t mean that Model Air is junk. Model Color is junk. Model Air just isn’t as good as paint I already use.