Since I haven’t done anything on the Ouragan model, I thought I’d continue that FASCINATING essay on the myth of the 02 Messerschmitt.

I got this photo from a Google search that provided this source. It’s a great photo. There are a lot of “doctored” color photos of Luftwaffe aircraft. This one look legit to me, except for a couple of things. I’m not saying that I am absolutely certain that it’s not a fraud. I don’t know that. But it’s a good example of the type of image I see that tends NOT to reinforce the bizarre (to me) idea that the Luftwaffe went insane with rage when defeated by the tea-sipping blokes of the RAF and painted their aircraft with creamy shades of vanilla.

Here’s the image with some notes pasted on. 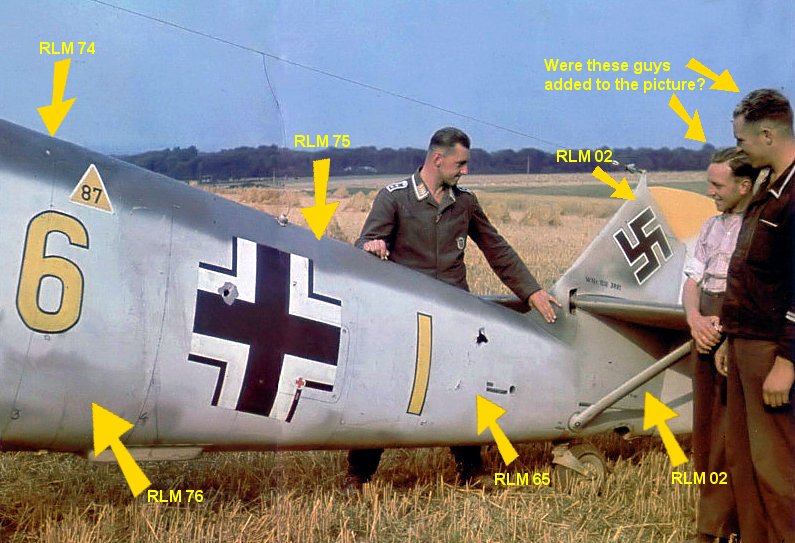 I’m inclined to think that the colors are real. First off, who is clever enough to lie this well? It has the ring of truth. Lies often “smell” bad to me. I can pick them up better than most people.

Yeah, I said that.

Most people who “colorize” photos just aren’t sharp enough to fabricate this thing. I’m not saying it’s impossible, I’m just saying that it would be unlikely. Take a look at the “beige” color near the tail (marked as RLM 02). Yeah, that’s right. It’s the color of 02 that I said didn’t exist. Well, I’m man enough to admit when I’m wrong and it looks like I was wrong as hell on this one. If that’s RLM 02, then it’s a beige color and I’m all wet on my idea (drawn from good sources, by the way) that it was green. It looks like I don’t know what I’m talking about. I admit that.

I’m caught in bit of a trap. I have to admit that 02 was beige to make the following point: that no “colorizer” is smart enough to put some 02 on there just to throw us off. I believe it. But the fact that it looks very beige DOES cause me to have my doubts. Nothing is certain.

The second part of the photo that looks bogus to me is the additional two guys who are just standing there looking impressed. For some reason, German WWII color images from magazines like “Signal” would often have these “admiring onlookers” pasted into them. Yes, it does damage the credibility of the photo, that it was manipulated–if it was.

But the overall look of the image is pretty good. Obviously, it’s a photo of some bullet holes. That’s what the excitement was about. The paint job was nothing special at the time. Just a plain old Luftwaffe Me-109 in France during the preparations for the invasion of Britain (which never happened due to Hitler’s obsession with Soviet Russia). The yellow formation markings are there. What’s missing is the mythical RLM 02 camouflage. It’s not there.

Also, we can see what I think is the application of the much lighter RLM 65 to paint over the “six” and the “bar.” They had to do this all the time due to the wacky Luftwaffe aircraft ID system. What saved them from having to sweat it was the very “loose” instructions they received on how to paint the planes.

Of course, they had the original aircraft in RLM 70/71 very dark green, or in the new RLM 74/75 grays. Then they were told to paint up the sides of the aircraft with RLM 02, RLM 65, RLM 70 and other colors to achieve a pleasing effect.

In other words, they had permission to graffiti the sides of the airplanes, and if you look at photos you can see the result. Many times, the so-called “mottling” on a Luftwaffe fighter is the result of 1) spraying over the number with a dark color like RLM 70, then 2) spraying over the dark spot with the lighter shade of RLM 02 or RLM 65 in blotches. It was a mess to look at.

Many, many photos exist of Luftwaffe aircraft showing a lighter color mottled over a darker one. During the Battle of Britain period, the color RLM 02 was used to “lighten” the darker RLM 70/71 scheme–but look at the photos, people. The lighter (and apparently beige) shade was not used to replace the color RLM 70. 02 was sprayed up the sides of the fuselage, and on top of the wings in a “mottle” to lighten it up. Photos of fighter planes during the BOB show this mottling on the wings and up the fuselage sides. The frame around the canopy on early 109’s was never repainted from RLM 70 black green and stayed this color (for obvious reasons–who wanted to mask it? Why would they?).

Let’s face reality. The schemes that modelers use on 109’s are, in fact, “woefully inauthentic” because we’ve been fooled. Flim-flammed. Conned.

Since the 1970’s, people have been trying to sell books to modelers. What book is going to sell? The book that summarizes old information in a handy format, or the book with “NEW, NEVER BEFORE SEEN COLOR INFORMATION! NEW DATA FROM BRAND NEW SOURCES! ALL NEW!”

The “all new” book is going to sell, even if the author has to invent the “new” information.

I’m a skeptic. When I see real data, I’ll believe. But much of what shows up is pure fantasy.

In general, when painting a Luftwaffe subject, the vast majority of fighter planes were painted in RLM 74/75/76. Basically, three grays. Luftwaffe fighters were gray. Not green or brown or olive. Bombers were two shades of dark, dark green over a very pale blue. Not green and brown. Never.

Late in the war, the fighters were painted in these dark colors as well, to try to hide them from marauding allied fighter-bombers. It was not a green/brown scheme. It was just a very dark green and gray. Probably a mix of RLM 70 and RLM 74 applied very densely.

I may be alone in my thinking. That’s fine. I’m open to new information, as long as it does not take the form of “here are Luftwaffe written orders combined with black and white photos that allow me announce THE SHOCKING FINDINGS IN MY NEW BOOK.”

4 Replies to “RLM 02 and The Most Interesting Photograph Ever”