So let’s pay a visit to an old forum where discussion of all things Luftwaffe is on-going (the 12 O’Clock High Forum), and listen-in on the assembled worthies. I won’t be adding to the thread. It’s old anyway.

Here is a quote:

You may recognize Mr. Eisenman and Mr. Boak. They are famous forum participants. I’m honored to have them as guests on my blog, even if I dragged them here against their will. It’s important to note that there is some question about the existence of certain Luftwaffe documents, and the answer provided is that, yes, they don’t exist.

So I’m not just blowing smoke.

I was in error in believing that the color called “RLM 02” was a pale green gray and not a biege-y gray. Oh it’s biege-y, alright. The problem is that the other color also seems to exist, as well as a pale, “pure” gray with no brown or green.

I have no idea what was going on back in ye olde Luftwaffe. No idea. The lack of paper documents leaves us all guessing, it’s just that some people put their guesses between two hard covers and sell them. I’m giving away my nonsense for free. That’s fair, isn’t it?

I went a-searching for old color photos of Luftwaffe planes and found some VERY INTERESTING stuff. Here’s the Rosetta Stone.

We don’t see many color photos of the upper wing surfaces of WWII Luftwaffe aircraft. Here one is. That beige color on the wings isn’t a trick of the light. 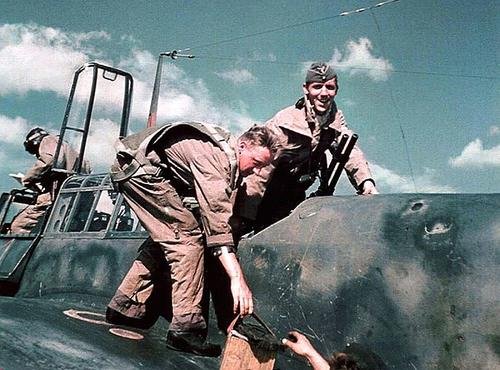 Me-110’s started out very dark as dark green/black green. Then it appears that “02” (that damned beige color) was sprayed over stuff to make them less dark. The photo above shows splotches of 02 sprayed on top of a very dark green paint job. The photo of the two flying 110’s shows the “mottling” extended to the wings. They were covered with a “02” mottle. The end result was a plane that was a “splinter” pattern of dark green and black green, overpainted with a mottle of “02.”

Me-109’s were different in that, in general, the original very dark green paint job was changed by painting a very, very light blue up the sides of the fuselage. 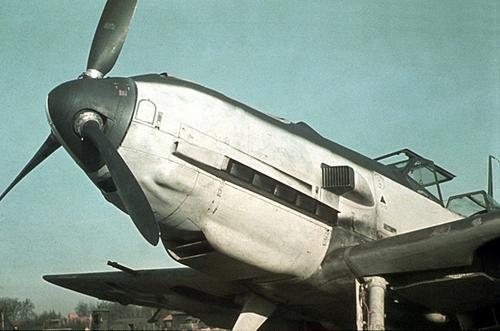 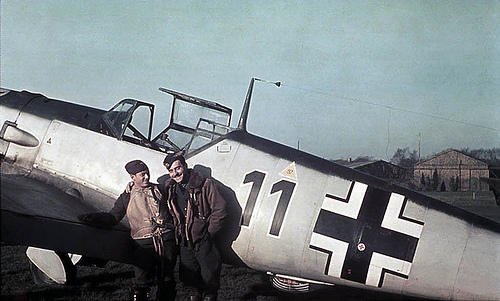 The “02” color makes 110’s look “jaundiced” in color photos. It must have been used a lot on 110’s because they always have this “yellow” look, even after being repainted in the new 74/75/76 scheme, or being painted that way at the factory. 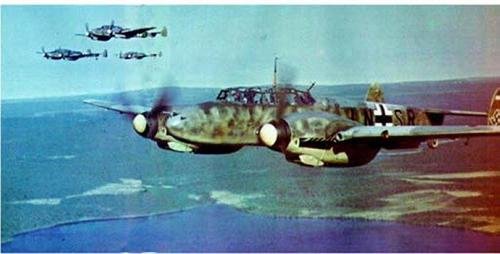 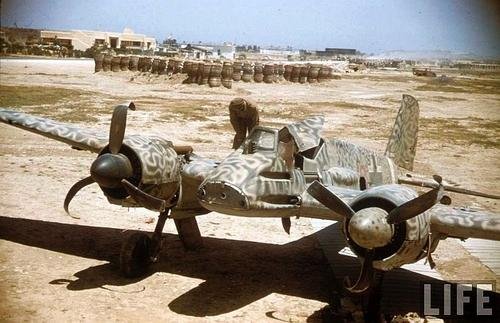 Except in 109 outfits. They used black green and pale blue painted up the sides. 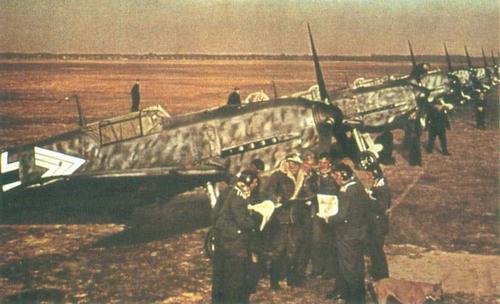 Why did they use black green and the pale beige “02”? Apparently, that’s what they had laying around. Units in the field had those colors, as well as the pale blue.

I didn’t find one photo of a 109 or 110 in the “standard” Battle or Britain scheme that we model builders have decided upon. It’s a myth. I didn’t have to pick and choose photos to avoid the hundreds of images of 109’s in dark green and “02”–because there aren’t any. No such animal.

This apparent lack of central control over color schemes may have had its origin in the dysfunctional Luftwaffe management structure. There were two guys running the Luftwaffe. We have all heard of Göring. The other guy was Ehard Milch, and he and Göring spent most of their time trying to sabotage each other. We haven’t heard of Milch, but if you look him up you’ll be amazed at the complete lack of central leadership within the Luftwaffe. Two guys were pulling in opposite directions most of the time.

The confusing case of the missing Luftwaffe color schemes (a Detective Dan Mystery) may be due to this infighting. Milch was in charge of production, R&D, and stuff like painting. Göring was in charge of “operations.” So it’s not that surprising that they couldn’t even agree on how to paint the airplanes. The resulting chaos is apparent in every photo of a Luftwaffe airplane.

We model builders are re-writing history, one model at a time. Forget the “experts.” Every time a new model with a bogus olive drab/pale beige scheme is posted on the internet another little kid in Iowa or Latvia downloads it and learns how German airplanes looked.

It’s not that big of a deal, but, you know, it’s something.

So what have we learned today?

The beige “02” was sprayed in blotches over the original dark green/black green color–even on the wings–of Me-110 aircraft, who were the elite of the Luftwaffe Fighter force and had priority for the good paint and good booze and so on.

Even if, as some experts have suggested, an Me-109 had been painted with 02, it would have had to have ended up with a pattern of very dark, black green (RLM 70) AND pale biege in a “splinter” pattern. Not dark green, because if you over paint the BLACK green you get a “reverse” of the usual pattern of dark/light on the wing. To get the usual pattern and NOT repaint the entire wing, you need to have black green and beige. That is one funky looking Messerschmitt.

…and, it they were going to repaint the damned things entirely, then why not use the “new” 74/75/76 scheme?

Which is exactly what they did.