This is the old, old, old Revell Ki-61 Hien in 1/72 scale. It wasn’t intended to ever be built by me. It just sorta happened.

Because I did not believe that it was possible. So I had to try it.

What happened illuminates a portion of the human psyche that is usually reserved for obscure psychiatric journals and Stephen King. 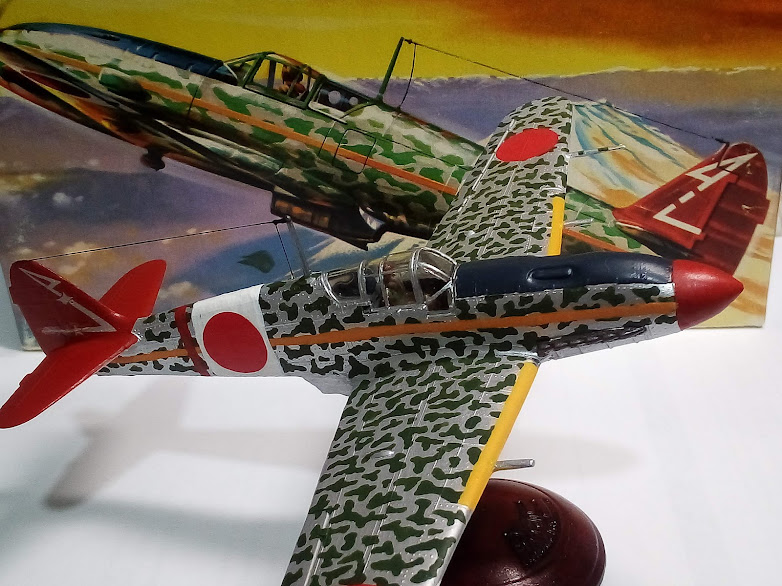 I held the opinion that this kit was unbuild-able as presented. The box art was so beautiful that it took my breath away. It sat there on the shelf at Skaggs (charming name) between the Slip and Slide and the Preparation H (unrelated) and it was glorious.

But NO human being could paint it. Later, I learned about airbrushes and masking and the obscure technology of modern painting–and I realized that there was a trick to it. Sure, you could paint a model to look like that amazing interceptor in the Brian Knight painting, clawing for altitude with Fujiyama in the background and B-29’s on the way–but you had to use special tools and stuff.

You couldn’t “just paint it.”

Except that’s not true. It began to dawn on me, as I’m rapidly turning into an old codger, that I could do this. I could just paint it. It took time to change my mind around so that I could even begin to grasp how much time has passed– and how much has changed.

But the key thing is that, in this case, technology IS NOT the answer.

The answer is me. My attitude. I could do this. So I did. This model was painted “free hand.” the only decals are the bright red meatballs. Six of them. And the tail marking. Other than those seven decals, it’s all just painted free-hand with a brush.

Okay–technology DID play a role. The paints had be developed that would allow for this, and I had to develop the techniques required to do it, but in the end, the idea that this was impossible proved to be an illusion.

How many more such illusions lurk in our subconscious??