There is nothing quite as arrogant as the accomplished athlete who sneers at the slow-footed fellow who comes in last in the 10K run–“How is it possible to run that slow? I could crawl faster than that.”

Yes. We’ve all heard “that guy.” Now, I find myself in the uncomfortable position of being unable to imagine how some folks end up with the finishes on their models that they get. I’m tempted, in a weaker moment, to sneer “I could do better than that with my finger.”

It’s a stupid thing to say. But really–how do bad paint jobs happen?

Here’s one of my “bad” efforts that I caught on camera. This was the result of putting a flat paint on top of gloss. That always fails. It failed this time, as you can see in the “crackling” of the finish. Flat paint cannot be painted over gloss. It has to do with the speed at which they cure and the way in which they cure. I’m not sure what the exact explanation is… but it doesn’t work. 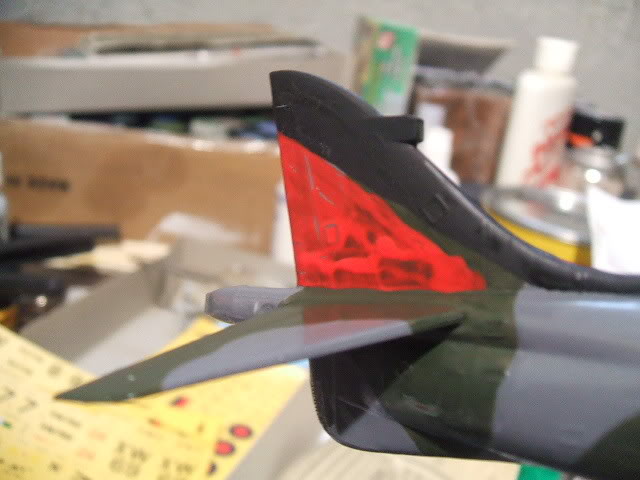 But bad paint jobs are usually not hideous, cracked surfaces with obvious problems. Bad paint usually is just, well, brush-marked. The global success of the complex and toxic airbrush is due to the fact that a beginner tries a few times to get a brush-mark free finish and decides that it’s impossible.

I understand. I really do. Nobody wants a nubbly-wubbly collection of plastic models in the style of Van Gogh. But the reason this happens is that the paint is TOO THICK. In attempting to paint the model in “one go” the result is like a layer of clay plastered over the surface. Lumpy and bumpy. Good paint should “self level”–i.e., smooth out. That’s right–there is paint that does that. But it has to be thin. Not like “milk” but like heavy cream. Like buttermilk if you’re from Texas or another proper buttermilk consuming state. It should brush on easily without “scrubbing” or “pulling.” That means “no brush drag.” Brush drag, the feeling that the brush is pulling over the surface, is bad. There should be so much paint in the brush that you don’t feel any drag. The paint acts like a big thick layer of lubricant.

You need certain BRANDS of paint to make this work. Don’t get into an existential crisis trying to determine how God in His wisdom allowed Humbrol or Vallejo to sell paint that is not fit for its bloody-well intended use. Who cares? Just get Model Master Acryl or Revell Aqua Color and party on dude.

Stop worrying your binky until it bleeds. Buy the proper paint.

The second reason that airbrushes rule the land and Sauron gloats from atop his tower is known to the elvish as “demarcation.” In other words, masking. Masking is of the devil.

Cut off thine own hand should it tempt thee to grab Tamiya tape or any other tape for trying to paint a straight line.

Look–I understand tremors. I used to have a pretty good case myself before I realized that overdosing on ethanol was causing a short-circuit in my nervous system. Now that I’m ethanol free (except for the occasional Tamiya paint experience) I no longer have the tremor. If you have a tremor that is severe enough to make painting a line impossible, then maybe you do need to mask and spray everything.

But you can also use painted decal film, cutting it in exactly the same manner as cutting tape, to get a clean, straight line.

But I’m sympathetic if you have shaky hands. That’s all I’m saying.

But I’m also saying that shaky hands goes with poor vision and an host of other reasons that one must use an airbrush, build kits in 1/48 scale, and do the other things not because they are easy, but because they are popular (to mis-quote JFK).

Bad paint creates bad finishes. That’s my theory today. If you use the right materials, you should get good results. But if you stick with what hasn’t worked in the past….

1 Reply to “How Do Bad Paint Jobs Happen?”