Every now and then I drift into Pacific War territory. I have a healthy variety of interests. Dinosaurs. Pirates. The Knights of the Round Table.The Old West. World Wars. Star Trek.

And, from time to time, the war in the Pacific from 1941 to 1945. When one of these spells comes over me I read The Rising Sun by John Toland. 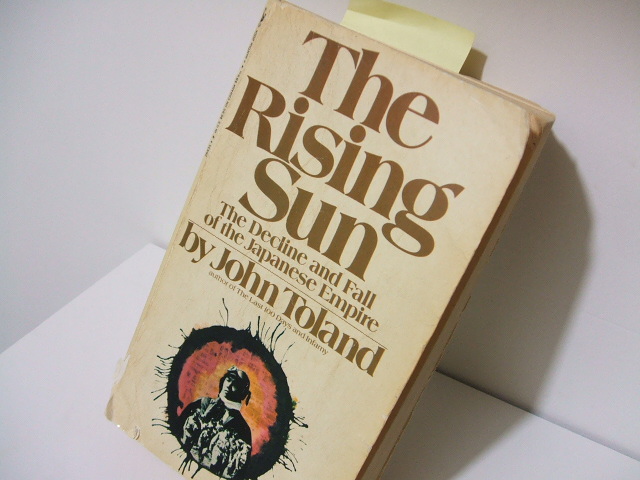 Toland really does tell the story from a “reasonably” Japanese point of view. The terrifying thing about this is that the truth behind Japan’s mad-dog actions in the 1930’s and 40’s is that one part of the government (the army) got out of control. Since the Japanese Army no longer had to (if it ever had) answer to the central authority, it went off and did what armies tend to do. It invaded and fought and shelled and so on. As people say about pit bulls, it was just a dog bein’ a dog–sorry it ate your baby.

Japan was thrown into the twentieth century from the, um, let’s say the fifteenth century. They were goofing along being feudal and the BOOM they had to make up about four hundred years of history in about forty. Now that’s moving forward. The great leap from 1492 to 1942 took place way too fast for anybody to be in control of it. Japanese leaders (especially in the army) thought they were ready for the bigtime, so they launched into world-conquering with limited understanding of what they were getting into.

This led to a huge catastrophe. For the world and for Japan. That does not excuse or explain launching illegal wars of conquest, but hey, what’s our excuse?

Having a portion of the government no longer answering to the rest of it is really, really bad. Ask the people of Hiroshima. Toland’s book explains just how Japanese aggression went wrong.

The Americans planned everything six ways to Sunday and probably ended up with five times the troops needed on Guadalcanal to obliterate the starving Japanese forces. But, in the long run, more is better. By the time the U.S. finished clobbering the Japanese in the Solomons, the natives were so drunk on free stuff marked “USA” that they invented cargo cults. Sixty tons of peanut butter? Uh, just put it over there for now.

Japan combined a dangerous, medieval way of thinking with a severely limited “logistical tail.” Without bullets (let alone toothpaste, beans, motor oil, trucks) the Japanese went from soldiers to targets in a very short time. The tragedy of it wasn’t just the horrible way the Japanese treated prisoners. It was the horrible way they treated their own soldiers. Perversely, Japan seemed intent on proving that their guys were tough, so tough that they could survive being shot, burned alive and run over by a tank.

Except they didn’t survive.

Another interesting part of Toland’s book are the portions devoted to the mysterious Colonel Tsuji, whom I believe was some kind of U.S. “mole.”

If you’re AT ALL interested in the portion of history, then pick up a copy of Toland’s magnum opus. It also makes a good doorstop.