As I mentioned in my last post, I have a Revell Golden Hind sitting in mothballs, waiting for the right moment to jump out and shout “Happy New Year.” Like King Arthur. My recent battles with both the Hellcat and the Havoc have left me in a foul temper. Perhaps if I didn’t build models of such belligerent-sounding objects? Anyway, I have a certain something in common with Ishmael from that greatest of all American novels, Moby Dick.

Whenever I find myself growing grim about the mouth; whenever it is a damp, drizzly November in my soul; whenever I find myself involuntarily pausing before coffin warehouses, and bringing up the rear of every funeral I meet; and especially whenever my hypos get such an upper hand of me, that it requires a strong moral principle to prevent me from deliberately stepping into the street, and methodically knocking people’s hats off–then, I account it high time to get to sea as soon as I can.

That’s right, it’s ship-building time! One of the truly great things about plastic model kits is that if you have any sense at all you’ll not get bound into just one genre. You’ll not fall into a habit of building only 1/72 scale aircraft, for example. I admit that I build almost exclusively that very type of model, but the Golden HInd allows me to avoid bearing the shameful mark of the rivet-counting-specialist–an inability to build something from beyond his experience, knowledge, or memory. I, for one, have seen many pirate movies and played Sid Meier’s Pirates  hours and hours on a Commodore 64. I’m ready to stuff some powder in to the blower and heist the cancre!

Did I mention that cool Jack Leynnwood painting on the box? 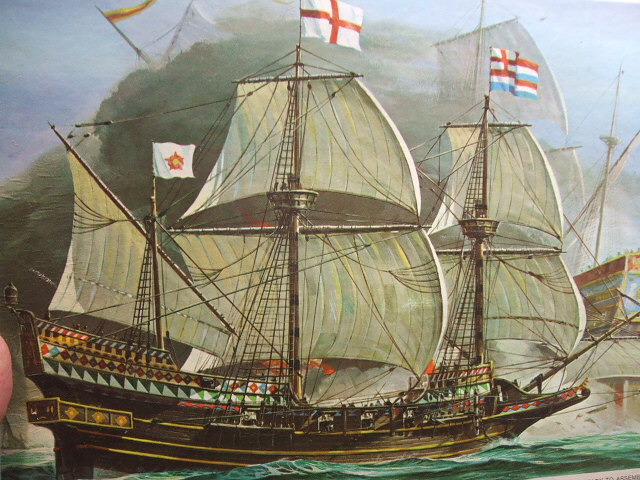 I have found that building sailing ships can be a tedious job. That’s why it’s good to be able to do it in stages. Here is where I’m at right now. A lot of my early efforts revolved around making home-brewed low-fumes washes and stains for the painting. Here’s the result. 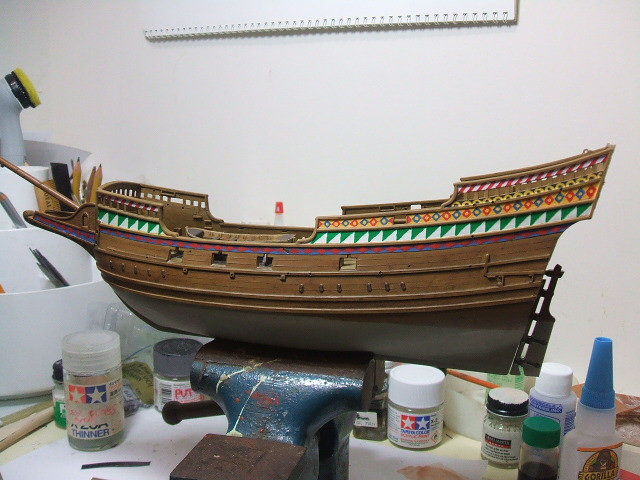 The deck was a particular challenge. 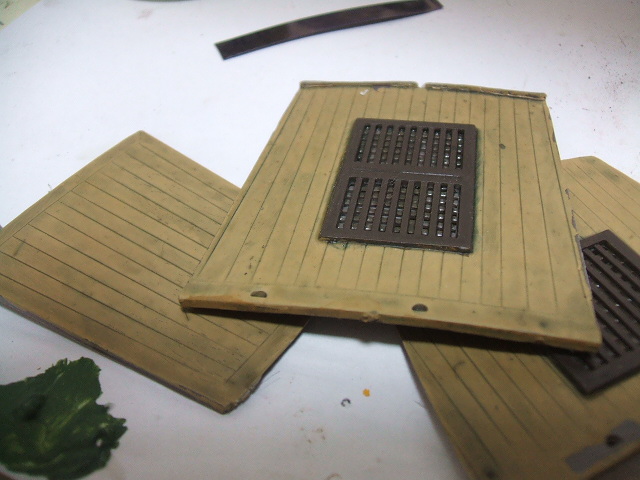 This is easy if you use mineral spirits. Tricky if you use only washes based on Future. Even ordinary wood stain produces a fancy paint job on plastic, but it smells of V.O.C.’s and will stink up your house. I had to invent the materials here, and eventually discovered that the way to go was ordinary food coloring in Future. This was after I tried acrylic “antiquing” gel, acrylic wood stain, acrylic paint and Future and a couple of other failures I can’t remember. 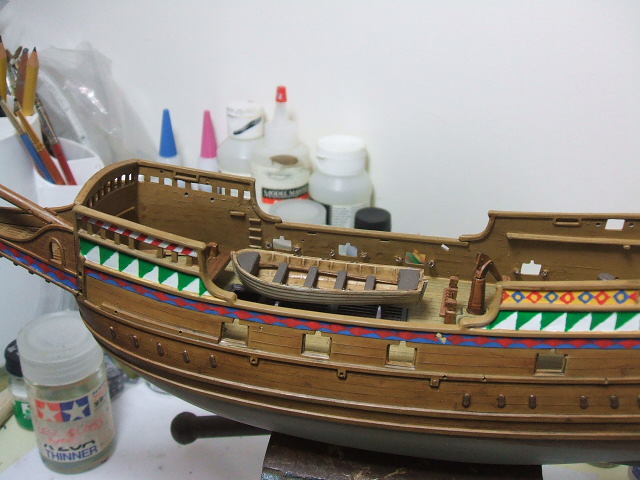 Of course, there is a school of thought that the Golden Hind didn’t look like this at all, and that’s just fine with me. The model is actually based on the one good drawing we have of a ship from this era. It’s “English Galleon” and it’s provided the basic pattern for many plastic kits, including several Mayflowers.

But another set of plans exist for a Golden Hind based on this replica in London. A very cool kit was made based on this somewhat different ship by IMAI and sold by ERTL. It’s larger model, is rather rare now, and I have one in the stash, which will be built, someday.

1 Reply to “By the Beautiful Sea”