I served Uncle Sam during the first half of the nineteen-eighties. During this time, the United States did not fight any wars. How do I know this? It’s simple. I do not have now, and never have had, the “veteran hiring preference” for a government job. While I do have a number of nifty “benefits” as a result of my military service, I am not given any additional consideration when I apply for a government job. To get that, you had to serve during “wartime”–which is just about ANY time other than when I was working on F-16’s at Kunsan, Korea, where the war with North Korea had “ended” due to a cease-fire, with no peace treaty ever signed (to this day).

Not that it’s the worst thing that ever happened to me, but it does seem unfair to me that the few veterans who actually succeeded at preventing war (“Peace is Our Profession!”) are, in fact, penalized for it. Of course, one may always make the argument that I didn’t actually get shot at, and so, um, something was missing.

Well, I call bullshit on that. The preference is not about being in “a war zone” or “combat”– it depends entirely on the date. No matter where you served, if the date is “wrong” you don’t get the preference.

Every now and then somebody in congress writes up a bill to provide this benefit to the “cold warriors” who served during thus lull in the action, but it never gets out of committee. It’s a non-starter. Volunteers who put it on the line when it was not at all popular, and served with honor, get no preference, while those who just happened to be on active duty during Vietnam or The Gulf War (but spent their time in San Diego, etc.) get the preference.

Meanwhile The Cold War is rapidly fading from memory. It wasn’t very fun, after all. Those H-bombs are just big old bummer generators. The fact that, as far as I can tell, they’re still around, hasn’t stopped us from just putting our fingers in our ears and going “la la la la” as loud as we can whenever anybody mentions it. Nuclear…

I have a couple of old, beat up kits of cold warriors that need to be built, and only pure cowardice has stopped me from building them. One of them is an Airfix F-86D that was started when I bought it, and the cockpit parts were missing. The other kit is a Heller F-94B. 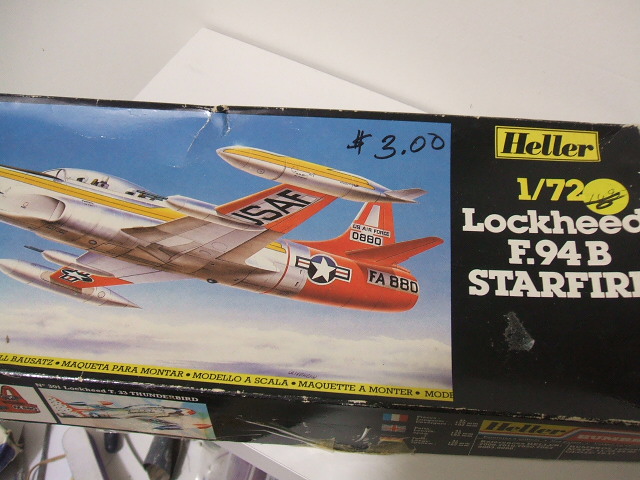 I have decals for both of these, so that excuse is out the window. The F-94 was also started and it, like the F-86D, was started by somebody who seemed to do good work, but I’ll be damned if they didn’t insist on following the flippin’ instructions. In both cases, they assembled the wings before attaching the wing tops to the fuselage, thereby assuring a wing root gap.

That phrase reminds me of the missile gap. John Kennedy, when running for president, provided “proof” that the Soviet Union had built many more missiles than the U.S.A. This claim helped him to win the presidency, but it turned out not to be true.

(I’ve got to build those cold warriors. Soon. But first comes the Ouragan.)