I had a number of reasons for buying a second kit of the Golden Hind when I was only going to build one model. Spare parts. Molded ratlines…

Old poops sitting around the virtual cracker barrel may not like them, but I’ve taken a look at these “abominations” and they look like they’ll work just fine. The key to getting the deadeyes and ratlines and shrouds to look okay is just like with airplanes–careful and accurate assembly will take care of 99% of the problems. Most of what makes plastic parts look bad in these cases is in the maker, not the material itself.

Let’s take a look at the “deadeyes.” 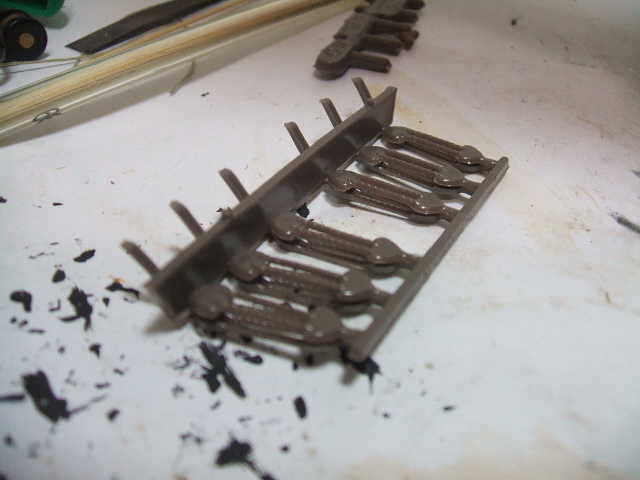 Revell did a decent job on these. In fact, they are so delicate you had better be very careful when removing them from the sprue or you’ll break them. Don’t use scissors. Use clippers of some kind. It’s like building a recent Airfix kit. Very delicate and will break if handled roughly.

The “deadeyes” come in two parts. According to Revell, you glue them together and then you do some kind of magic and use the funky “pre-formed” ratlines/shrouds by tying them to the deadeyes. Even I think that would look bad, and I can tell you that it looks bad because I’ve done it. I built a Golden Hind and a Revell Thermopylae back in the day. Revell’s solution just didn’t work for me.

But the new, molded parts will work. It’s a no-brainer. But I want the finished thing to look okay. Fine. Fair. Not lousy. I’m not trying to make my model look bad. I’m just trying to avoid the most insane kind of crazy-making waste-of-time activity in the cosmos, scratch-building something so intricate and monotonous and likely to look like hell when you’re done.

Got that? I know what will work for me and I’m going to do that.

Here are the inside parts of the deadeyes. 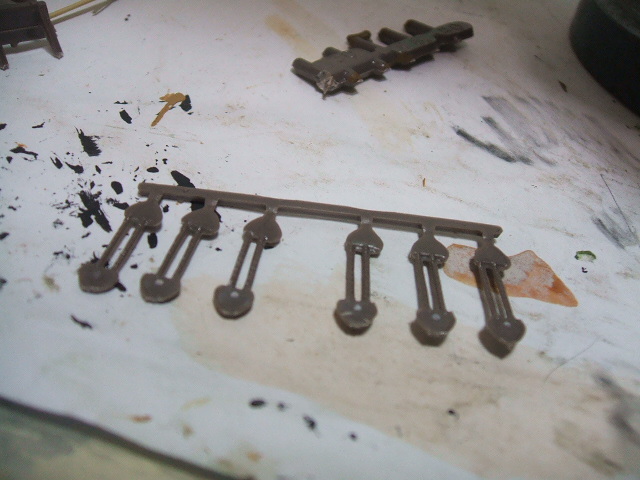 They have all sorts of problems. They have god-awful pins that align things wrong, and they don’t fit. That bar along the top (I’ve looked it up twice and forgotten it twice) shouldn’t be there at all. But it can stay, if half of it goes away. I’m going to clean up the “inner halves” of the deadeyes and remove the “bar” thing and glue each of the inner halves in place individually. That should improve the look of the deadeyes. Then I’ll carefully assemble the whole thing so it looks like it “runs together” and the blocks will be painted Revell earth and the ropes (lines?) will be black. I’ll even paint the ratline/shrouds if I have to. 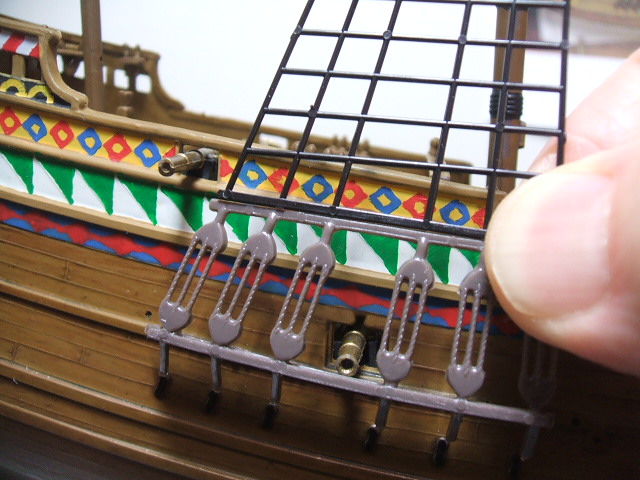 Once it’s all securely glued together and painted up so that it all blends in, it should be acceptable. Maybe not to historians and naval architects, but they aren’t here, are they?