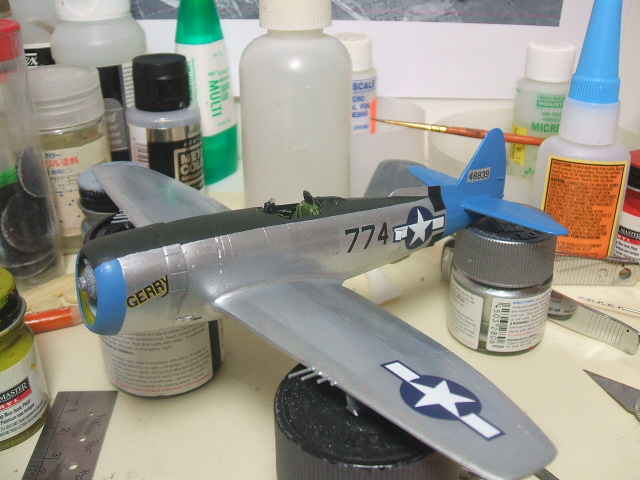 The mixture of Tamiya Flat Base and Future was brushed onto the painted areas (only). I’m not going to put a clear finish on the “bare metal” areas. The clear flat on the anti-glare and blue areas really alters the appearance of the model. That gleam on there was really giving the model a “toy-like” quality. Now it looks like a proper, professional toy for a quasi-adult. 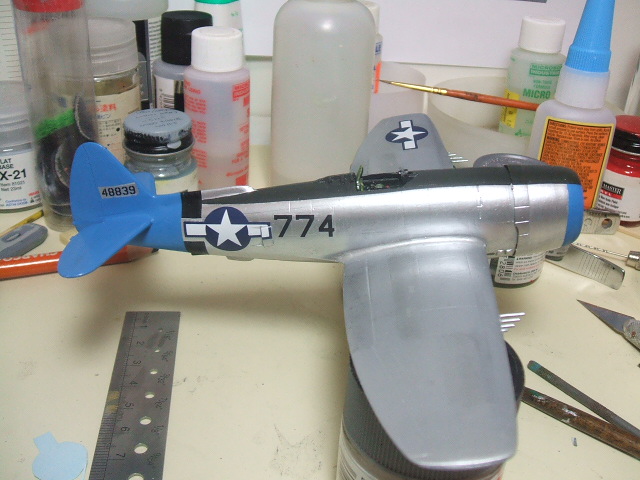 The paint job here reflects the research I did over a few days using Google. I didn’t do anything unusual and I don’t have access to any obscure or exotic sources of information. It’s Google all the way (except for the P-47 book I mentioned earlier).

So why does my model look different from everybody else’s? I guess I’m not blind (yet) and can clearly see that in every photo of planes from this unit the anti-glare panel extends out all the way to the edge of the cowling. The ring around the nose just doesn’t go all the way around. Look at the images. Do a little Googling yourself.

I’ve already discussed the blue color. It should be just a touch more green (I should have added a drop or two of yellow) but this is the color I used and it’s close enough for a plastic model. The numbers on the aircraft that I have seen in photos are not way up near the anti-glare panel so that’s how I did mine.

But I never did find a photo of this particular aircraft, and since nobody is talking about sources, that will remain a mystery for now.

Decal material, painted with a brush using Vallejo Metal Color, was cut to size and used to represent those bare areas around the national insignia and the tail number. First the bare metal decal is applied, then the other one on top of it. I also added the IFF (Identification Friend or Foe) lights under the port wing tip. The correct order, from front to rear, is red, green, amber.

Next time we’ll talk about vac-form canopies. High Planes included one with their kit but it is out of scale–too large. I have a suitable canopy from Falcon which I’ll use.