There’s been a lot of bushwa splattered about on forums in the name of Mustang wings. There was a sticky on Hyperscale all about how the wings on P-51D’s were puttied and the panel seams were smoothed out and the wings were actually painted with some kind of aluminum lacquer.

Interesting, I’ll admit that. Not too interesting, but interesting. Not something I’m going to spend five seconds worrying about on a model. On the other hand–big, huge errors made by kit makers that make them look foolish. I’m interested in that!

Enter the P-51B wing vs. the P-51D wing 1/72 scale. Two wings, two very different backgrounds. One wing grew up on the burning streets of Compton, the other was raised hard in the back alleys of Queens. Are they alike? Are they different? Two wings. Two destinies.

In 1/72 scale a number of kit makers have fouled up the wings on the P-51B kits. Is it a conspiracy? Is it space aliens? No, it’s just what we scientists refer to as “dumbness.” Dumbness strikes without warning and can take down ANYONE.

Monogram, in 1967, made P-51B kit with the proper wing. Italeri made a P-51D with a proper P-51D wing. Here are the two models, side by side, with no modifications to the wings. 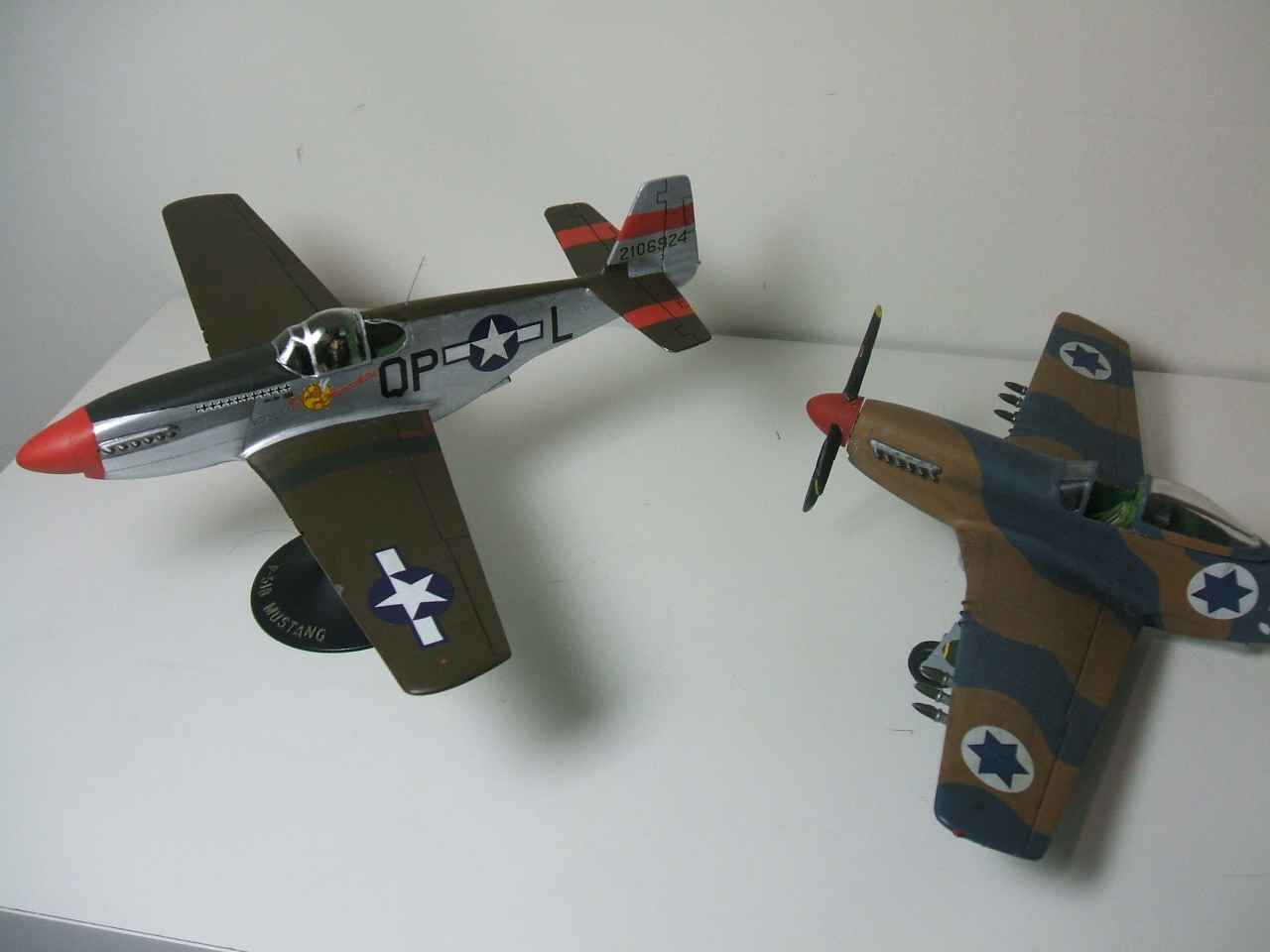 Note the fatness of the Italeri wing. Sorry–“swelling.” Sorry– “thickness.”

Actually, it’s the chord at the wing root. The P-51D wing root has an extension on the FRONT edge that makes all the difference. I took a wing part from a Tamiya P-51D kit and compared it to the Italeri wing. It’s the same. 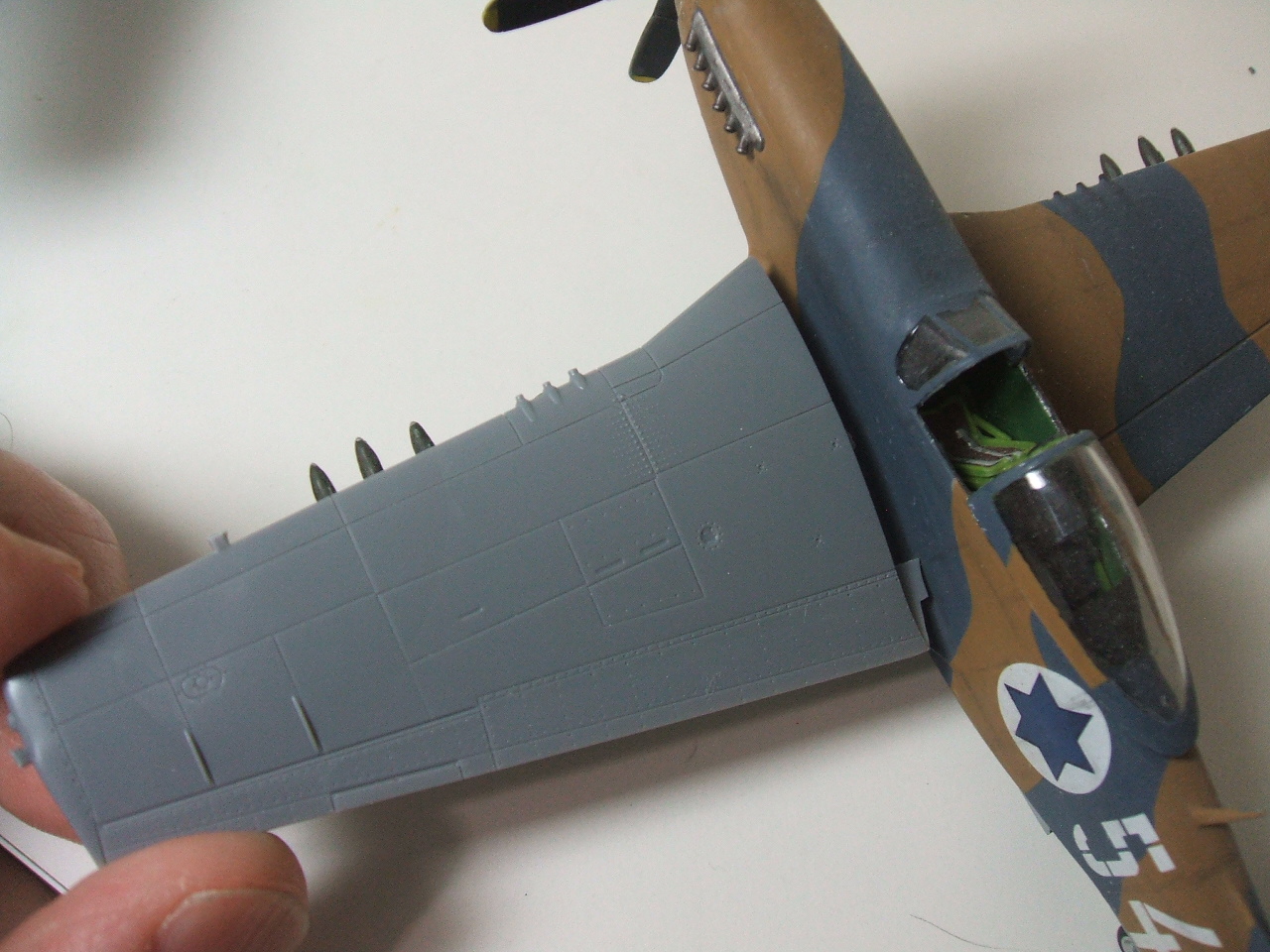 I put this wing next to the Monogram model. 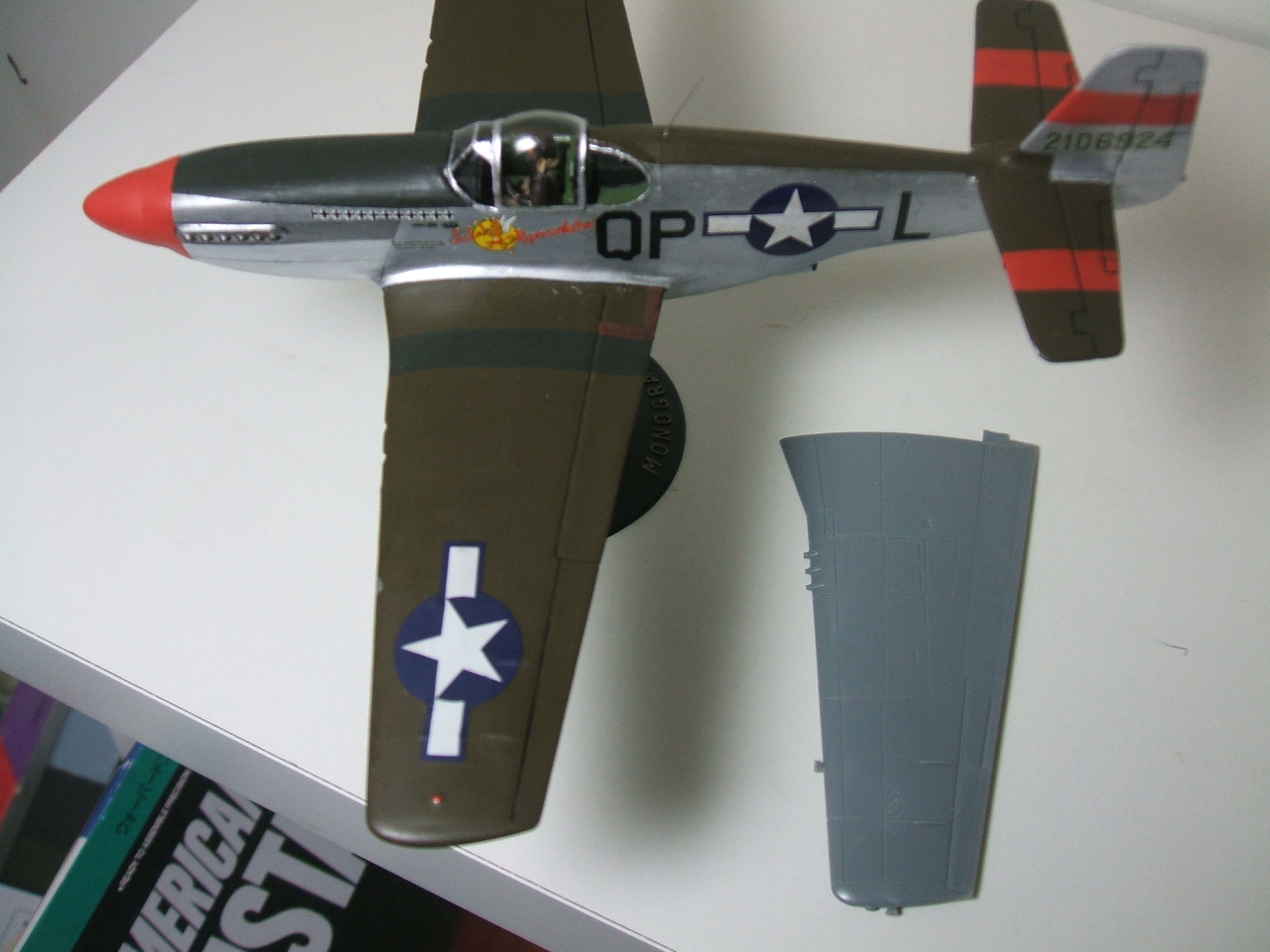 I put the wing on top of the Monogram wing. 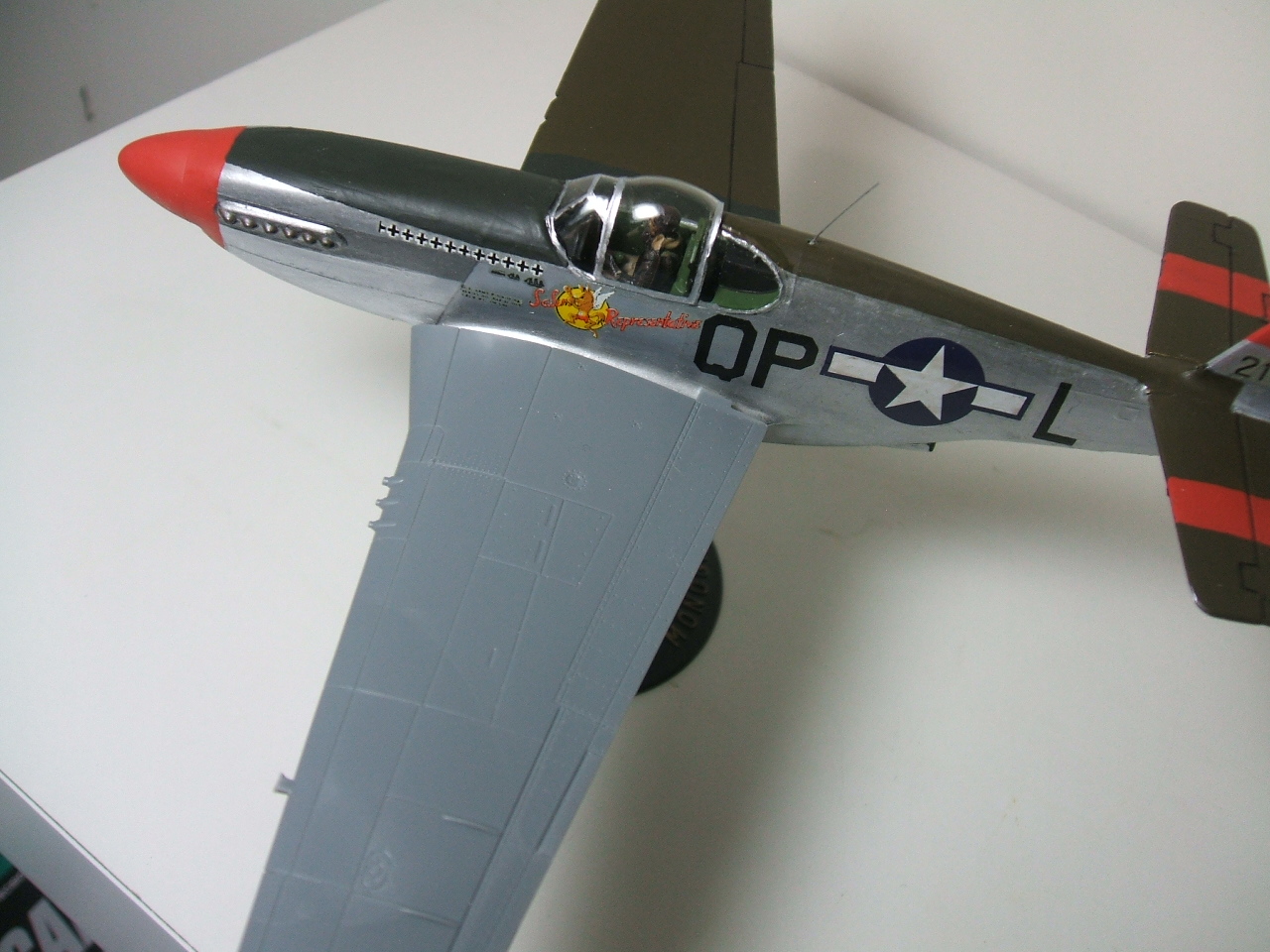 Then I put the wing UNDER the Monogram wing.

THAT is the difference. That extension right there. The difference in shape is entirely in that triangle of metal that extends out at the root.

Here’s a picture of an Academy P-51B. 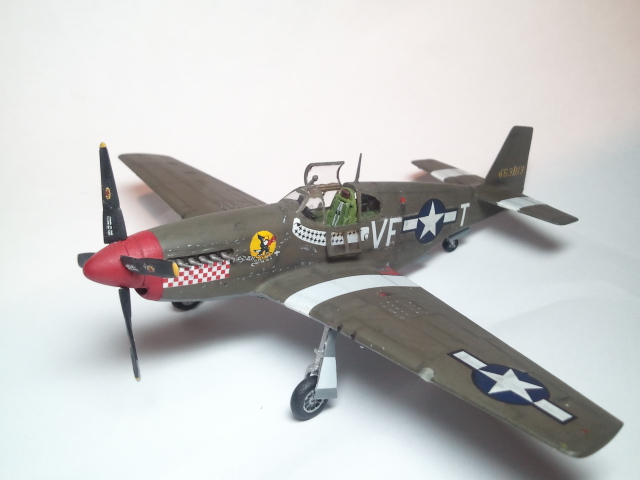 Compare it to this. 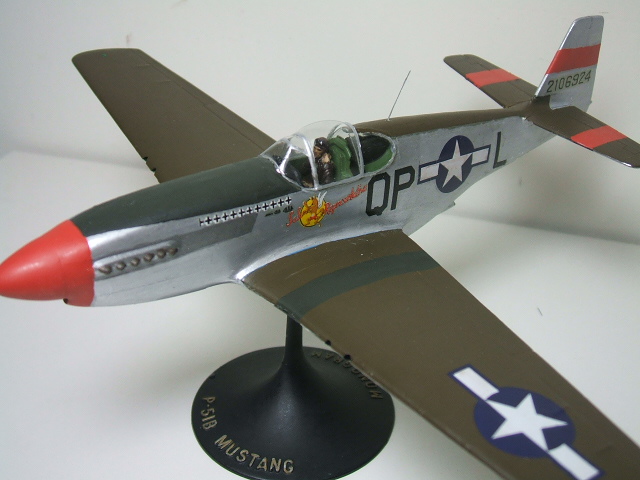 The Academy model is in storage or I’d take some side-by-side photos. But we’re out of luck today. My point is that this kit has wings that, at the root, resemble a P-51D because the chord is too great. The whole wing measures too broad across the wing from front to back. I did measure this before I packed away the models and you’ll just have to believe me that compared to the Tamiya or Monogram wings (which are known to be “good”) the Academy wing is all wrong.

I put a lot of work into that model. So, apparently, I didn’t notice the error.

It seems, as if they took the wing root measurement of a P-51D, and then built a P-51B wing around that. It’s just fouled up.

I wish I had a Hasegawa and a Revell kit to compare. Looking at on-line images I’d say that the Hasegawa kit DOES have the P-51D wing. So wrong. So very wrong. Sad.

For shame. Hasegawa reputation is in free fall on my blog.

Revell’s wing lacks any forward faring at the root. It’s closer to accuracy than the others but it’s still off. Just for the sake of my loyal readers, I looked at photos of the parts of the KP kit (yes, they are still on my boycott list) and it looked about right.

So that’s how I ended up building a kit from 1967. I won’t buy a KP kit so the old Monogram kit is the only one that’s accurate in wing-shape.

Of course, we could talk a bit about the Revell P-51D in 1/72 but that’s a story for another day.