In a world where “truth” and “falsehood” are really difficult to identify, one thing stands clear. I’m not a “ship fan” and this whole episode is about building an old Revell kit that I like. Building a model ship is all about the enthusiasm. If you can maintain it for long enough–it gets built. True ship fans just have more of it than the rest of us. 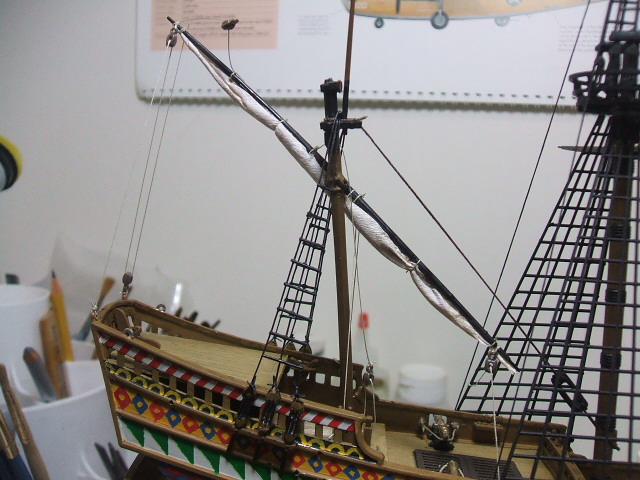 I added some strings to the mizzenmast and long may she wave. Unfortunately, the Revell instructions are not as clear as they could be in this area, and when I decided to go rogue and furl the sail, it all came crashing down like some middle-eastern dictatorship. So I’m faking it and using my intuition to do it up. Despite my lack of credentials, I am fully committed to the furled sail, and to rigging it in whatever manner I can figure out or guess at.

I am learning something about ships. Now I have yet another confession. My dad was a “rigger” and taught me something about how actual rigging works, and the amazing power of ropes and blocks to multiply strength. I can see that most of the rigging on this ship has a vaguely logical purpose, but it also (to me) looks like a good way to get killed (especially in a storm).

I guess that’s why it changed over time, historically.

I’m also VERY skeptical about the “sailing into the wind” thing. They didn’t really sail “into the wind.” They gained just enough confidence that they wouldn’t be hopelessly stranded (we’ll get home…eventually) so that they had the courage to go hunting for the huge piles of gold rumored to be in the New World–and it didn’t take much prompting to go after something like THAT.