Japan and Great Britain have so much in common that it’s surprising to me that the media hasn’t adopted this theme and made a movie out of it or something. They’re both island nations, they’re empires, they really, really like plastic model kits.

Most of the plastic model kit stuff you find is from Japan (it used to be from Britain until they stopped making things back in the eighties). Plastic kits are mostly made in Japan (or by Japanese companies), and the 800 pound gorilla of the Japanese hobby industry is Tamiya. Tamiya is many times larger than their next largest competitor, and they make just about every kind of hobby item, including paint. They didn’t get to be so dominant by making poor products. They make really good stuff. The model kits are good. The paint is good, too. Some of it they sell in the U.S. and Europe, in the form of a “non toxic” acrylic paint in jars and spray cans. 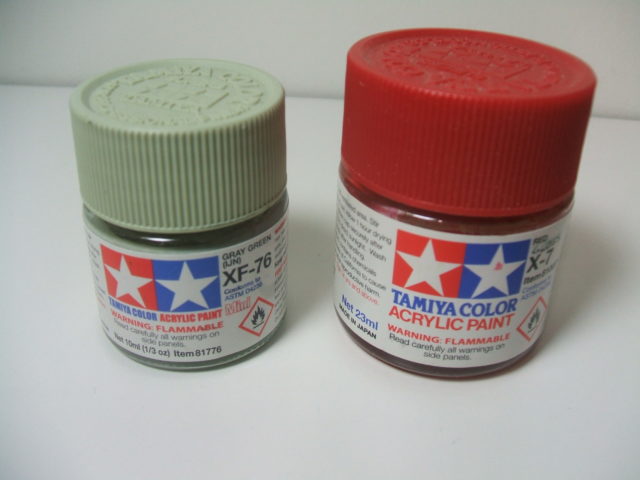 The only problem with it is that it’s designed to do a slightly different thing than most hobbyists would like it to do. It’s designed to be “fool proof” and so it does one thing really well. It goes on by brush or spray and dries fast. No mess. But if you’re trying to get really good results, it doesn’t work so well. It’s a fine product that delivers on one promise– to never frustrate or traumatize the youngsters who buy it and apply it to Tamiya’s model kits. But in order to keep that promise, it has to fail to deliver as a paint for a “serious” user. The funny thing is that in Japan Tamiya sells an enamel paint that is made for that “serious” market. It smells to high heaven and is somewhat toxic, but my understanding is that it is “serious” hobby paint.

Well, I’d be remiss if I failed to point out that 1) you can’t get the “serious” paint in the U.S. without a lot of hassle, and 2) I intend to use, have used and will use the “non-serious” paint for brushpainting. But I have to “treat” it with some kind of additive to get it to work well.

The problem with Tamiya’s acrylic paint certainly isn’t the packaging. Those bottles are the best packaging I’ve ever seen– for anything. So that isn’t the issue. They tend to cover in one coat. So that isn’t the issue. The problem is that when you’re finished you have a serious mess. Brush marks everywhere. The only way to keep this from happening is to thin the paint, slow down it’s drying time, and apply it in several thin coats.

It’s relatively easy to thin paint. Just add some of the proprietary “thinner” that the manufacturer sells. Simple, eh? Well, the problem with that is that the thinner that Tamiya sells may or may not change the way the paint works. I want to change it. I want to alter its properties in a big way, but the Tamiya thinner will just make it thinner. It won’t help it flow (“self level”) and it won’t slow down the drying (also critical for “self leveling”). In order to do that I have to add some stuff from the world of ART. 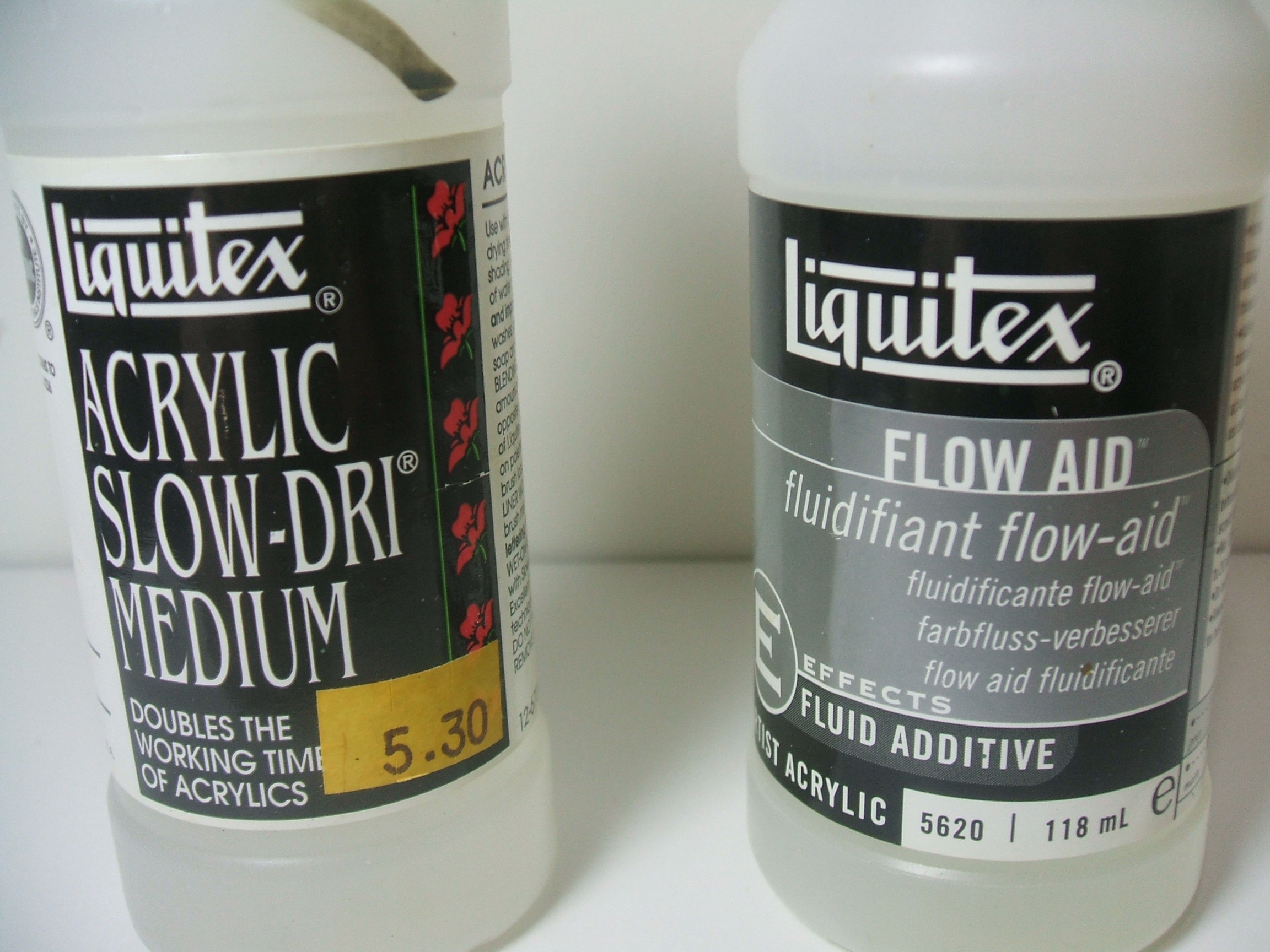 I’m talking about a “flow aid” and a “slow dry” additive. The ones above are from Liquitex, which is a popular brand here in the U.S.. I add two drops of each to a bottle of Tamiya paint, try it out, and add more if needed. Don’t over-do it because using a lot will just thin the paint and provide no extra benefit.

Since I’ve now added a few drops of additive to my bottle, I still have to thin it. For this I use Windex. Good old window-cleaning Windex which is blue and everybody in the U.S.A. knows what it is. If you live outside the U.S. be happy for the internet. You can buy Windex from Amazon (I hope). Windex not only makes a good Tamiya paint thinner, it removes another wonder product from the good old U.S.A.–FUTURE. Windex just cuts Future like a hot knife goes through butter, as my momma used to say.

So far I’ve suggested too utterly un-exotic products that most people can find in their kitchen in the U.S.. However, you may find that these products are exotic where you live, and I can’t do anything about that. Your version of window cleaner, named Winsy Poo and made from alcohol and beeswax, has nothing to do with me. Your version of floor polish/wax/varnish may be called Glare with Formula H and it may be made from shellac and raspberries. It’s not my problem.

I studied human psychology during one of my many lapses into the academic world, and I studied something called “frustration/aggression theory” at that time. Apparently, people get aggressive when they are frustrated. So you can’t find Future or Windex in your country, and you get aggressive and demand that I provide the name of your local equivalent? I’m not going to be nice to you and allow you to be aggressive. You should be learning about acrylic floor finishes (that’s what they are) and ammonia-based window cleaners (that’s what they are) and stop blaming me. The world is a big place. Deal with it. Don’t let your psychology be your master.

Now let’s assume that you have added some Windex and flow aid and slow dry to your Tamiya paint. Can you now just race ahead with confidence? Sorry, no. You’ll need to apply several coats because paint of the proper consistency will no longer cover in one coat. That whole “one coat” thing was fine for the kids in Japan, but for us it’s not going to work. We need to apply multiple coats. To do that is tricky, because the solvent in the paint eats the underlying paint on contact. On contact.

This means that subsequent coats dissolve earlier ones. This is a bad thing for a lot of brush enthusiasts, because, while they pay much lip-service to the idea of proper brushing, they just don’t actually do it. They want to brush that paint on. They want to scrub it into the surface. The mouth may say “light touch” and “flow the paint on” but the back-brain and the hand are all into “stroke it ’til you smoke it!”

You do that with this paint and it will not work. Subsequent coats must be applied as if you were in mortal terror of disturbing the underlying paint (because you are). Just put the paint on with as little fuss as possible, never going over the same spot more than twice, and only once if possible. Three times ruins the paint job.

In future episodes we’ll spend more time on Tamiya’s paint–which is wonderful, widely available, cheap, and did I mention the wonderful packaging?

2 Replies to “Tamiya Paint: A Guide”