Mottling. Silly word. Entirely too tinny. But every plastic kit builder has encountered the mystery of how those mysterious Nazi airplanes are supposed to be painted. It beggars belief that a little model should end up looking like the rat’s nest exhibited by a typical Luftwaffe airplane in 1944.

What IS that? It looks like they just spray stuff at random on there. Some photos show more or less detail, but mostly it’s a mess. So you just have to get a photo and try to copy it, right?

Oh no way, my naive young friend. If you want to impress the girls at the IPMS meeting (okay, that was uncalled-for) you need to know your Luftwaffe and you need to consult your Luftwaffe “references” and determine the correct colors according to the self-proclaimed “experten.”

Well I’m fed up with that and I haven’t even really described it. That’s how little I appreciate the mini-industry in “research” that has attached its sucker-like head to the flesh of the living host, erm, I mean hobby. But the existence of the living slack masters who sell books of colorful profiles isn’t the only problem–it’s the invention of the airbrush, which made it possible to hook it up and spray little dots on a model that sorta, kinda, almost looked like the Luftwaffe plane in the photos. Add a little fog of war and a little artistic license, and waa laa you have a beautiful and amazing Luftwaffe paint job for your World War II collection.

But that doesn’t really add up. The only thing that makes the airbrush the “perfect” tool for re-creating the German air force is that it sprays paint, and the Germans loved to spray paint on their aircraft, but just because the only painting tool you have is an airbrush, doesn’t mean that everything should begin to look like a mottle.

A “mottle” is the word that’s used to describe something that defies description, so we just memorize “mottle” and forget that all about any doubts we may have had about how these German warplanes looked. They were mottled, says everybody, and that’s that. Anyway, THE GERMANS were all about conformity and following orders, so you just need one example and you can extrapolate from that, right?

But it’s not so simple. If you look, and I mean really look, at the old photos you can see that the markings applied to Herr Hitler’s aerial armada seemed to follow few rules and be applied by rabid individualists. Many of the airmen in the service of the Third Reich didn’t like Hitler OR Goering and tried to “spice it up” whenever they could. Orders were, believe it or not, ignored, flouted and just plain undermined whenever possible. Luftwaffe planes often–more often than not– had custom paint jobs, applied by artistically-minded Dieter or Heinz, not jackbooted SS Dieter or Heinz.

The rules were bent to the point of breaking, and so our reliance on “rules” for determining the colors, patterns and appearance of Luftwaffe camouflage is misguided.

One thing I’ve noticed is that a lot of Luftwaffe aircraft seemed to be painted and repainted, several times, with new spray-jobs being layered on top of old ones. Often lighter colors were sprayed over darker ones to create the “mottling” and not the other way around.

Having said all that, I’m going to admit that trying to determine the “true” nature of the paint-job on one of these old German aeroplanes is just a royal pain. I’ll cop-out and use the “mottling” excuse as quickly as the next guy– I just don’t try to convince anyone that I know the real truth because of my warehouse of original artifacts buried under a mountain in Bavaria. I know, and admit, that I’m making stuff up.

So, given that we’re just playing with toy airplanes, what does a respectable “mottling” job look like? Is it something like this? 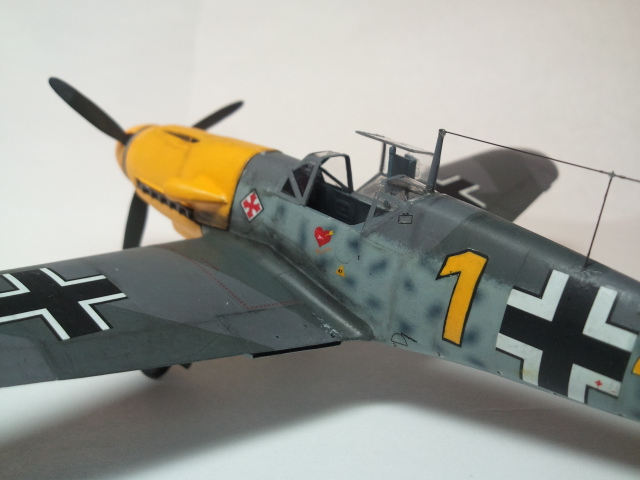 It’s a simple task to “mottle.” Just put fuzzy dots of the right color on the side of the fuselage. But using a paintbrush to do that is dangerous to one’s self-esteem. You can say that it looks good all day but you and I know that it doesn’t. So what is the alternative?

My choice is to go to the relatively inexpensive HP ink-jet printer that I have hooked up to the computer and print the mottling “dots” onto decal material (I buy mine here), then use the mottling decals to add the dots to the model plane, and so avoid having it look like I did it with a brush and a lot of good intentions.

It’s not really so hard. The tricky part is getting the printed fuzzy dots to match the paint you’re using. The way I did this was to print it out, check the color, correct it and try again. You’ll need a program like The Gimp to do this. It’s not dead easy, but then again neither is airbrushing it. So you can take you choice. Spray it on with an airbrush and get a (probably wrong) camouflage scheme that way, or print out the dots and apply them as decals and get a (probably wrong) camouflage that way.

Either way, you’ll have mottles. The only disadvantage to the decal method is that you have to get a spray can (eek!) and spray on a clear finish to “seal” it after the decal is printed. I just went oudoors on a fine day and did the whole job for a bunch of sheets with one can of highly toxic Krylon Clear. Did the job, and may the small animals killed by the toxic cloud not burden me with too many additional spins on The Wheel of Kharma.

But there is one more teensy issue. If you’ve managed to hook up with the gal at the IPMS meeting and found your way to a chair, you may still offend someone. It seems that some folks consider printing decals and using them instead of airbrushing to be, well, CHEATING. That’s right, they actually consider the venerable and ancient art of plastic kit building to be sullied by the use of artificial thingies like computers, and are outraged by this type of thing. At the risk of offending the Goddess of Plastic, I’ll just go ahead and say that if this be cheating, let’s make the most of it! I think I see a spot over here that looks like it needs a mottle! Hand over that decal Cousin Caleb…

I’m seriously considering painting up a Tamiya FW-190D to illustrate this method, so I’ll try to provide more details in the near future.