Sometimes the very best thing in the world is to get a away to a cabin. That’s exactly what I did a week ago, and I’m well aware that I’m a lucky man to be able to do something like that. Especially because the cabin in question isn’t my headache–it was loaned to me by a dear friend.

Sometimes, it’s better to have friends than money.

The “cabin by the lake” idea is popular world-wide, but here in Minnesota a lot of people feel that, darn it, we invented the idea. That’s a bit silly, since cabins in the woods are popular all over the world from a dacha in Russia to a “cottage” in Maine.

Still, though, Minnesota claims “the cabin” as cultural icon. Upper-middle class people in Minnesota have cabins (which resemble typical modern homes) and those of us lower on the socio-economic ladder often have a “family” cabin that is inherited from an earlier generation– when men of all genders were men and a cabin by the lake meant no running water, no heat and no indoor plumbing.

I spent that last week in splendid isolation in one of those old-timey cabins . I’ve stolen some representative “cabin photos” to illustrate this blog post. 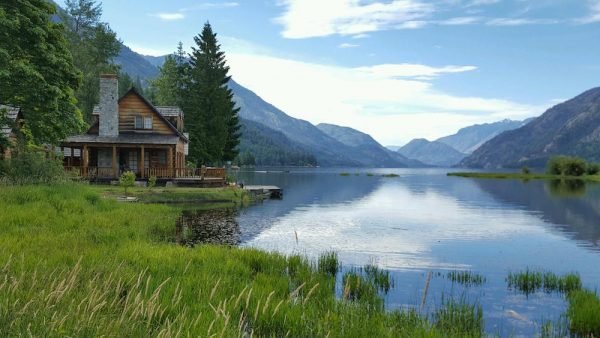 Few things in life are more refreshing (to me) than some solitary time in the woods, but our culture also frowns on that sort of thing. Face it–you go out to the woods without a power boat or a rifle or a big crew of “friends” and a wagon-load of booze–you’re a weirdo.

I do, however, have a backup excuse for my solitary retreat. I’m writing a novel. Yes, like all other lame-ass bloggers, I’m writing a novel. If you have written one, good on ya’. If you haven’t, you have no idea what a mind-swallowing odyssey it is. Some time alone is required when one is threading tiny concepts and slippery ideas through miles of complex verbal plumbing to arrive, hopefully, at a conclusion that isn’t completely stupid.

Anyway, the trip to the country did me a LOT of good. It’s amazing how spending a few days cut off from civilization, (no car–no, seriously, no motorcycle– no nuthin’) can improve one’s outlook. In my case, I’d say it was truly medicinal, rehabilitative and therapeutic. If I hadn’t been writing the Beast in the Box (no, that’s not the title–that title is taken) I’d PRETEND to be writing a novel just to be able to get away.

2 Replies to “Vacation OVER! All Prisoner Work!”