Once upon a time, paper wargames from Avalon Hill and SPI were, well, wargames. The world has changed but like all old farts I have NO intention of recognizing these redundant and wrong-changes.

Put it back the way it was, dad-gummit.

There’s just one thing. I quit wargames. It didn’t happen all at once, but over time I withdrew from what had been an important part of my life, until, now, I really don’t play wargames at all.

I’d have to say that the one thing that really sent me on my way out of the wonderful hobby of rules interpretation, erm, I mean wargaming, was my experience with what was, and is, my favorite wargame–Victory in the Pacific from Avalon Hill. This game just kicked ass. It was relatively simple yet contained a universe of strategy. Like (dast I say it?) chess it reflected far more than the sum of its parts. It was, and is, a masterpiece.

Except for this one thing…

I read these rules and determined that the game worked a certain way. 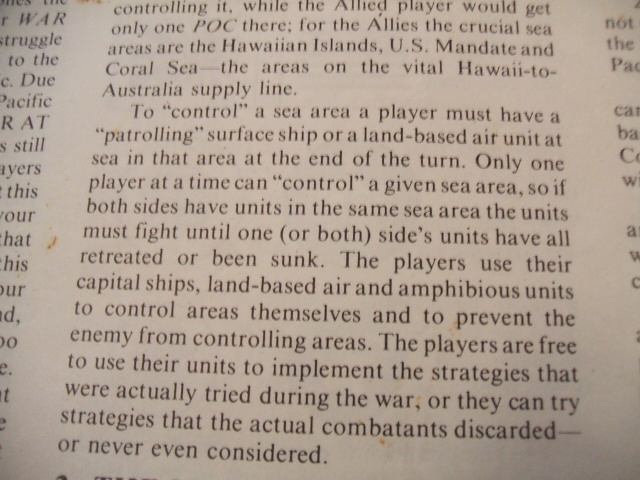 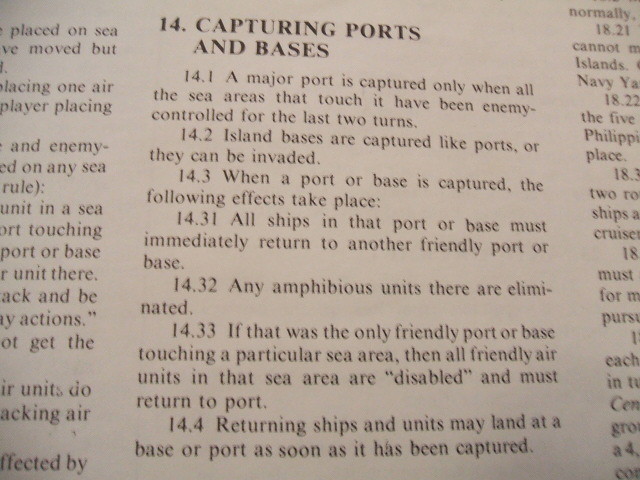 I played the game this way for quite a while, and I EVEN played it that way against my wargaming buddy, who was no rules lawyer and was, in general, an agreeable guy.

But then I attended a gaming convention in Los Angeles. I sat down to play in a tournament and I discovered that I had been misinterpreting a rule. It seems that the “official” rules interpretation went like this–to capture bases or ports one needed to control the sea around them for ONE turn.

The thinking went like this: I “control” an area if, at the end of the turn, I “control” it. So if I control the sea area at the end of a turn, and hold it for JUST ONE MORE TURN, then the bases and ports in that area fall to me.

I couldn’t believe it. I still can hardly believe it. But they played it that way at the tournament and I found myself floating on a very tiny rubber raft in the middle of a very huge Pacific Ocean. I was lost and alone and feeling very much like a pilot stranded in the middle of the vast expanse of limitless water.

That was one damn realistic game.

I did research and wrote letters and tried to find out if maybe, just maybe, the gamers in Southern Cal had gotten it wrong.

Nope. That was how the game was played. I was out of luck. But I wanted no part of what I’d call “Victory in the Pacific: Stupid Version.” Playing the game in this sick and twisted way takes all the suspense out of it. It turns it into a silly dice game where strategy is relatively limited. It also swings play balance over to Japan–to such an extent that most players “bid” victory points to try to keep the game even. It’s a mess.

In my “wrong” version the game is balanced. Strategy plays a role. Both players have to fight to the bitter end and the outcome is always in doubt.

I–pretty much–gave up on wargaming with the horrible mutation of my all-time favorite game. It wasn’t a mutation to anybody but me–me and my gaming pal were the only two nerds who played it that way, I guess–but it took what was a bright and shining game and turned it into a second-rater.

I’m sure that secretly, somewhere a mining engineer in West Virginia or a teacher in Manchester or an accountant in Sydney plays the game MY way, and enjoys it, but dare not speak its name. My style of playing Victory in the Pacific is queer. Despite being vastly superior, it’s not right.

3 Replies to “Why I Quit Wargames (Short Version)”