Rick Atkinson’s An Army at Dawn is the first book in his now-complete “liberation trilogy.” I’ve read the first two books in the series and, someday, I’ll read the third one. It’s nice, fat, old-fashioned example of good, honest historical research. The notes that support Atkinson’s story are supplied in detail. Sometimes they make him look fair and unbiased, and sometimes we get the impression that he’s “fudging” a little to make the story a little better. As long as he’s providing the evidence of his claims, I don’t really mind. Whiz-bang war stories are popular, and if you have to “nudge” the truth a little, I get it.

But one of the criticisms leveled at Atkinson is his hesitancy to address the very issue that he strongly implies is the very essence of the book and the theme of its writing–the manner in which a bunch of amateurs went from being a rag-tag collection of country boys and city slickers and turned into The Legion of Death. How did Americans, who surely do not have a golden martial tradition (with the possible exception of John Philip Sousa) give birth to a global military with millions of dead enemies scattered around the world. How did that happen?

Reading Atkinson won’t really explain it. I do know a little about the North Africa campaign as fought by Americans, because this was my father’s war. He was lowly private (promoted to sergeant for technical expertise and busted back to private for reasons that were never made clear to me) in the glorious 19th Combat Engineer Regiment, famous for being wiped out at Kasserine Pass.

I heard many, many stories about this war, from someone who had experienced it first hand, in one of the units that played a major role. My father denied ever having been in combat, despite hitting the beach at Oran in a landing craft, being shot and shooting back at units of the French Foreign Legion, and personally destroying a staff car filled with Foreign Legion troops. Shortly after that, he was informed that the French were now our friends, and the very people who had been trying to kill him were now allies. and his previous actions, including killing Frenchmen, had been “unfortunate.”

He believed that his contribution to the war was negligible, that the United States had unfairly drafted him and thrown him into action against an enemy he did not know or understand. He felt that the real enemy was in Japan, that our adventure in Africa as probably misguided, but that the whole thing was a poorly-organized nightmare of lice, mud, confusion and the ever-present local population, reduced to begging and thievery. The louse problem (and the associated threat of a typhus epidemic) became so bad that the American soldiers routinely washed their uniforms in gasoline to kill the lice.

His unit constructed the “tunnels” that were intended to be used as bunkers by the cowardly Lt. Gen. Fredendall. These were not merely dugouts, they were underground office buildings. My father never knew what they were. The troops building the “tunnels” were told that they were, after all, “tunnels.” Dad left North Africa after being seriously wounded, which resulted in the loss of his left arm. He never understood nor appreciated his role in the war, absolutely did not want to be called a “hero”–and of course upon his return to New York that’s exactly the treatment he received, complete with being “wined and dined” by the toast of New York society, a trip to the opening night of the musical Oklahoma (due to his Oklahoma roots), and, later, a truly weird (to him) concert by none other than Florence Foster Jenkins. At about this same time, he was informed by another patient at the hospital that his unit had been massacred by the Afrika Korps at a place called Kasserine Pass.

One can scarcely imagine what he must have thought of all that. He was never able to put it into words–who could?

Which brings me back to Atkinson’s book. I liked it, for it’s depth and honesty, but sometimes I found myself wishing for a little more flavor. It’s all nutrition and no gravy. Atkinson seems to deliberately omit the one piece of information that he needs to complete the picture. While he does say that Americans in battle became angry and learned to hate, he doesn’t spell out that they were angry at being in the war in the first place, and intended to kill, by any means available, any and all people who were responsible for keeping them in this mess. This meant that no holds were barred.

In the end, no weapon was too horrible, no mechanism too disgraceful to be employed in the service of “getting us the hell out if here.” It’s this aspect of The American Way of War that makes it fascinating to a history buff, but Atkinson is just a little too squeamish to confront it directly. He says, over and over again, that Americans “learned new tactics,” “learned to fight,” and “learned how to win.” But what the really did was learn how to butcher people was fast as possible in order to bring the whole horrible business to an end. Is this a “bad” way to do things? Is it better to wave flags, polish buttons and salute while whistling the national anthem? Or is it better to hate war so much that you’ll kill everyone in sight to bring it to a halt, if you have to.

I don’t know. My dad passed away in 1995. I’ll never know how he felt about that particular question. He did like to quote FDR. “I hate war. My son John, who’s in the Navy, hates war.” Then he would laugh. 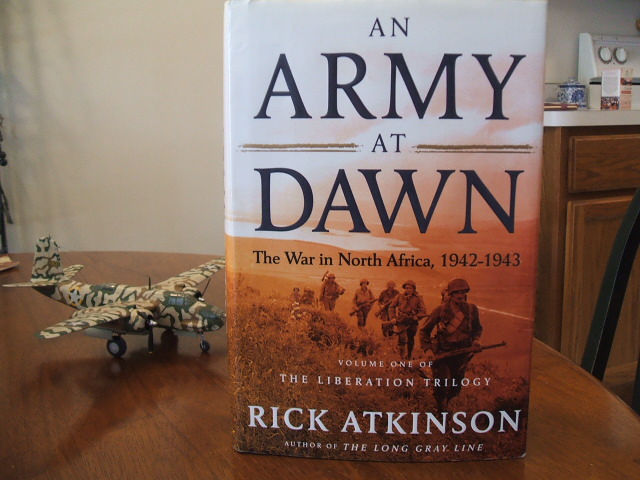 2 Replies to “An Army at Dawn: Book Review”