After reviewing the old Profile Publications I thought I’d mention a newer book in the same general category. It’s pretty decent effort, so this review won’t be too stern and I’ll be able to get this blog entry written and have my warm milk and toddle off to bed before too long.

Let’s start with the weird stuff first. It’s a hobby book, so you know there’s going to be weird stuff. In this case it’s forgetting to mention the names of the authors. The text was originally written (in Japanese) by Kazuyasu Hyuga and Yuji Matsuki. The illustrations were done by Yuji Matsuki. The book was translated into English by Roger Criss. Now, I looked, pretty hard, and I didn’t see any of these people mentioned on the cover of the book or on the title page. They were mentioned on the copyright info page, for some reason.

The book was published by the same folks who bring you Fine Scale Modeler, a publication I’ve always thought of as hostile to people like me who build plastic model kits. FSM always seems to be implying that my hobby is stupid and I should take up model railroading or RC planes or an adult hobby like that. Failing that, I should at the very least scratch-build my models or something.

So I don’t buy or waste time reading their magazine. I vote with the old wallet. Yup.

Where was I? Oh yeah, a Japanese book on U.S. fighter planes in WWII. Considering the characters from English-speaking countries who claim to be experts on Japanese fighter planes of WWII, it’s only fair that the Japanese should launch a counter-attack.

It’s not bad. The illustrations are well done and I like them because they agree with my thoughts on the colors of U.S. planes. But that, of course, is a dumb thing to say. Just because I like the images doesn’t mean squat.

I just finished building a model of this plane. 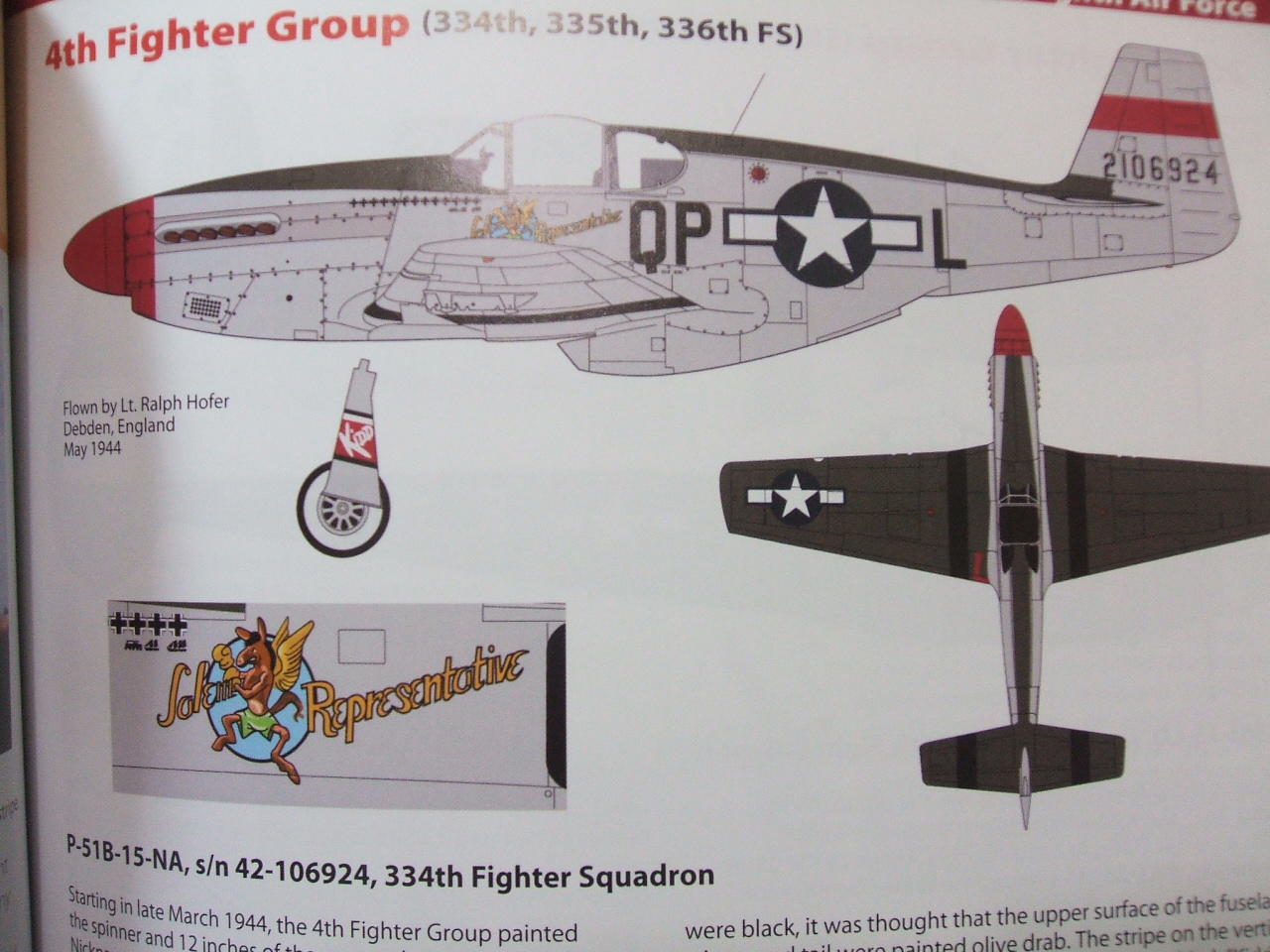 I think they have the “Missouri Mule” more accurately represented, and they do show that landing gear door with the “Kidd” insignia, but they also show the stripes on the horizontal tail as black. They look red to me in the photo I saw, but that’s just me. The caption is suitably vague, saying “it was thought that” instead of being more definite. I don’t know if that’s Japanese humility or what.

There are a lot of images. Some very good color photos. Lots and lots of black and white photos and many colorful drawings. But when you dig a little deeper you run into the same problems here you find in the old Profiles.

Nobody cites any sources. At all.

I’m a big fan of P-47 Heaven. It’s weird that P-47 Heaven seems to have gone into a coma, but the information there is gold. You can find a lot of discussion of the following two color schemes.

Here’s a well-known Thunderbolt with some kind of “winter distemper” applied over the original paint job. 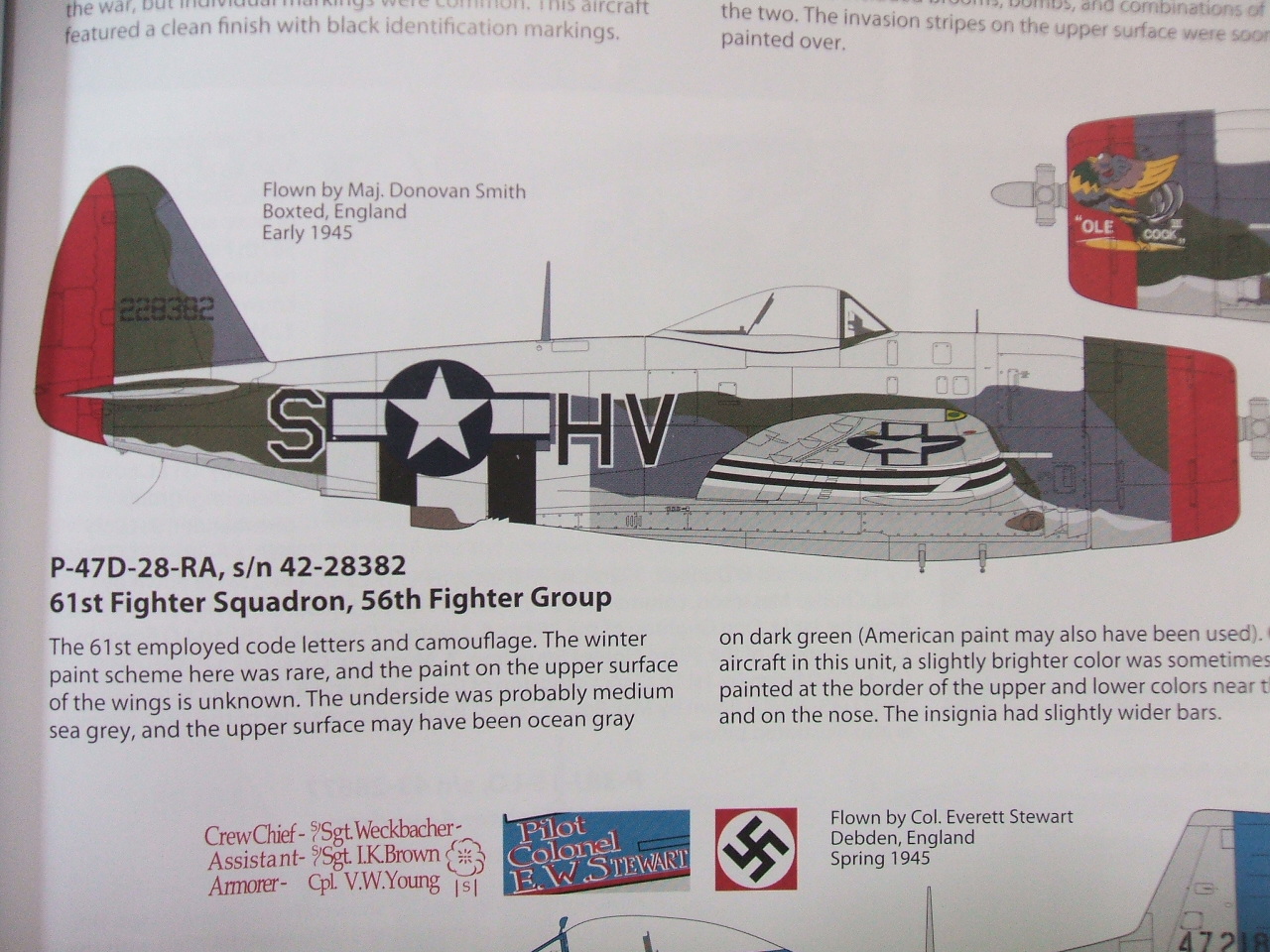 No mention in the book as to where this came from. The caption is, at least, uncertain because the forum thread it was lifted from was uncertain. Actual color photos can show artifacts like the “slightly brighter color” and these may be spurious or they may not be. But now, somehow, Kalmbach Books has printed a book that makes this material “theirs” in some way. I mean, the P-47 Heaven is being disrespected here, for starters. They should get a mention if that’s where they got it. I’m not playing copyright lawyer, I’m talking about simple courtesy.

Here’s another item that can be better understood by visiting P-47 Heaven. 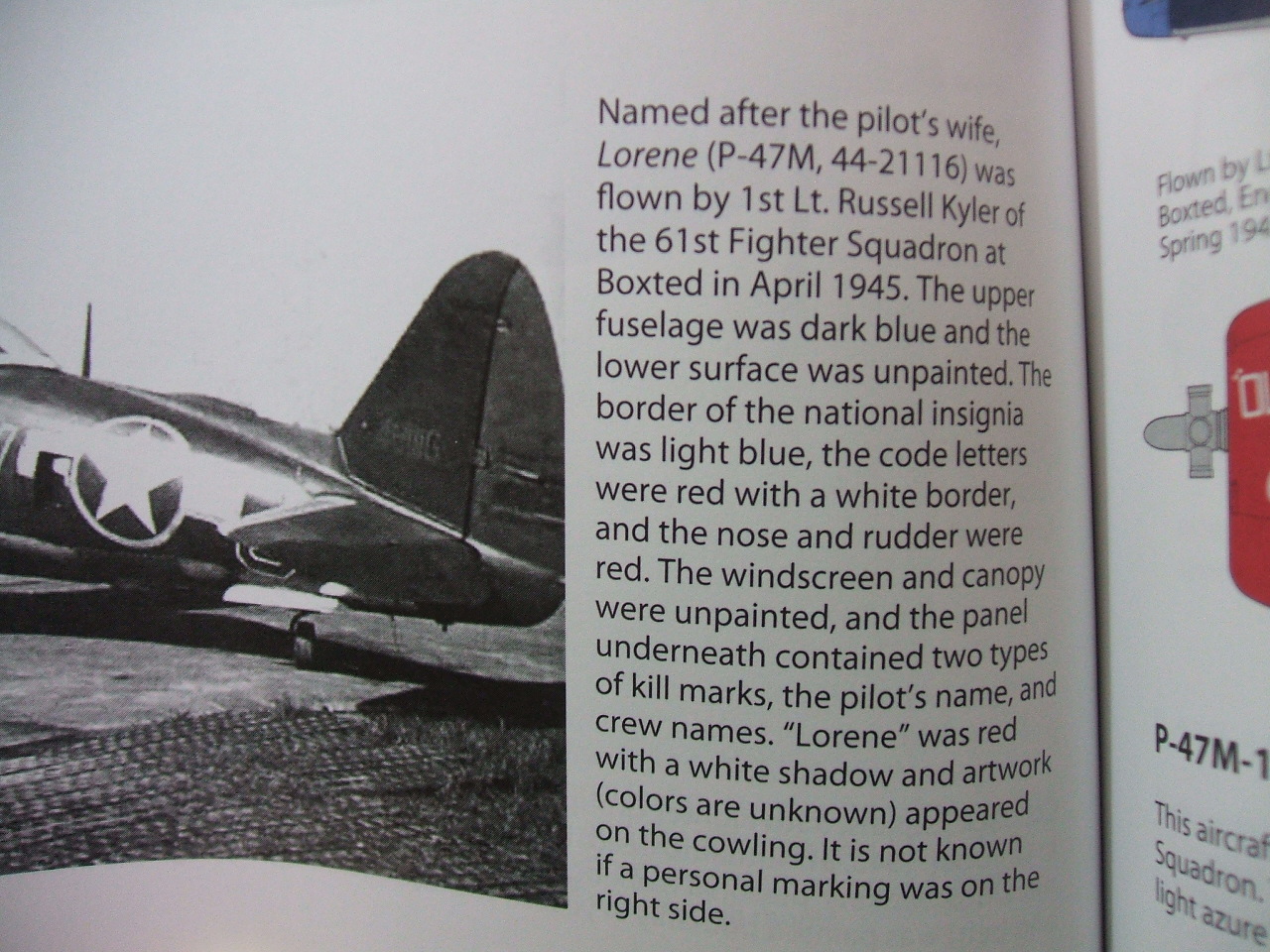 Evidence at P-47 Heaven tends to favor BLACK as the color of these planes, not blue. This is based on a model painted with the actual paint used at the time on the actual aircraft. It was, and is, BLACK. You can believe what you want–maybe the model wasn’t painted with the same paint and the builder was full of it. But I’m betting that BLACK is correct. If the book explained all this, instead of forcing me to do it while I’m trying to stay awake (that milk is kickin’ in HARD) it would be nice.

The book doesn’t have an index, which made finding Hofer’s plane a trial every time. The book does not list sources, although the Japanese tendency to couch every definite statement in seven layers of qualifiers makes that much more bearable.

It’s not a bad book, and for what it is–a colorful collection of fanciful drawings sponsored by our non-friends at Fine Scale Modeler–it’s pretty good. I do wish, though, that this wasn’t one of the best books of its kind out there. Because it is–and that’s a sad state of affairs.