Well, I posted yesterday an image that showed what I thought was a problem with the sails on the Revell kit. My reasoning was the the wind couldn’t go two directions at the same time.

But as my friend Tim Holland pointed out, the lateen sail is used as an airfoil, and the lift generated by the passing wind acts as  “wind rudder” to allow the ship’s rudder to be centered, decreasing drag and increasing speed.

Here’s a new image that incorporates what I’ve learned. 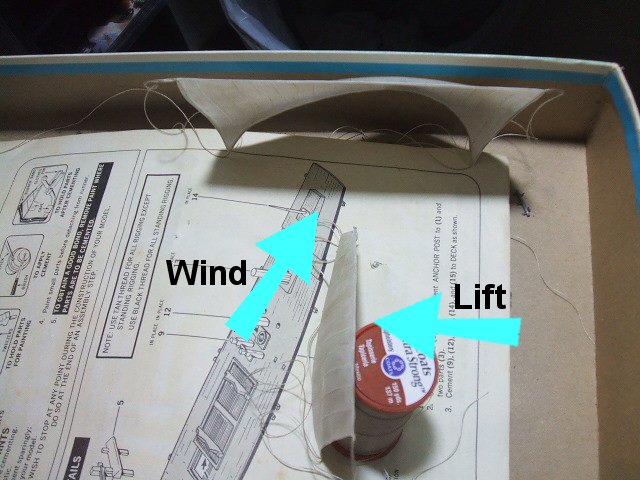 So, my original understanding was faulty. This image correctly shows the relationship between the two sails and the wind (I hope).

I still don’t get it. Maybe I’m too old to learn new tricks. Maybe I’m much stupider than I had previously thought. I just don’t get how this thing actually works. I don’t see how it can provide enough “oomph” to do any real good.

But it is obvious that my original “quick and dirty” analysis was all wrong. Also, I had attached the shrouds and ratlines to the mizzenmast (see how salty I’m becoming?) in a manner that was way, way wrong. So I re-did the whole thing.

I used thread and pieces of stretched sprue to make the new shrouds and ratlines. It didn’t turn out too bad, and helped me to overcome my phobia of these things. 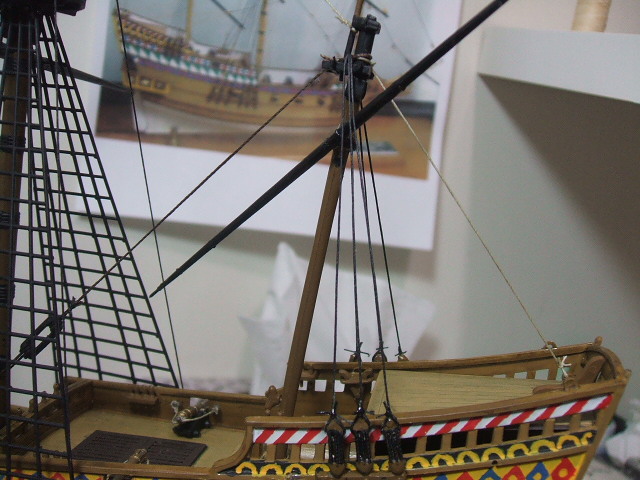 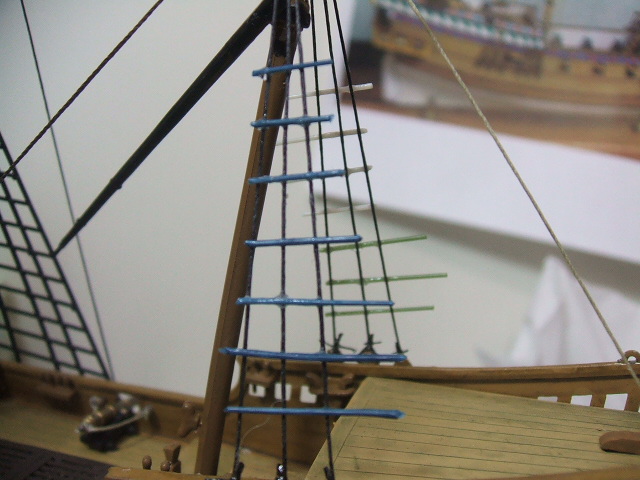 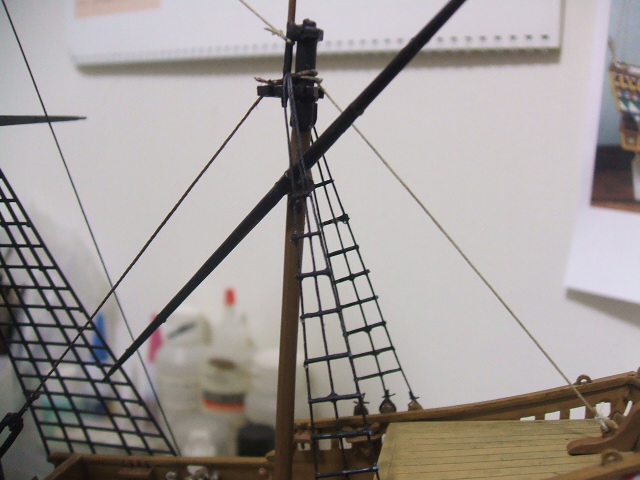 If I EVER build that Airfix Mayflower, this will come in mighty handy.

Now, back to today’s issue.

Here are some images from some beautiful paintings of 16th century ships. 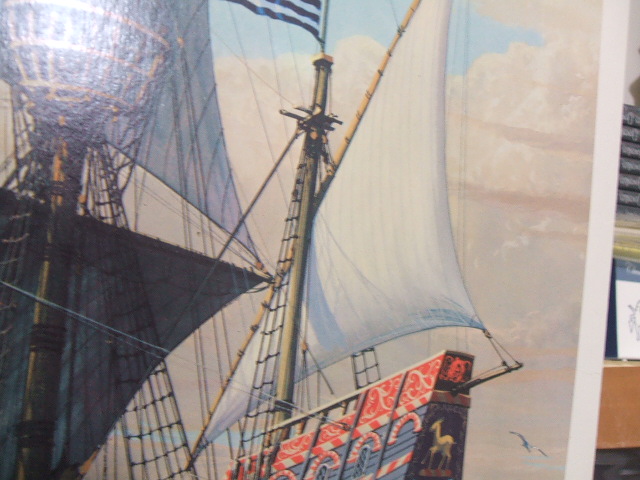 The top one is IMAI’s Golden Hinde, and the bottom one is Airfix’s Mayflower. Notice that the shrouds seem to be fouling the lateen sail, or I’m second-cousin to a barnacle. It also appears to be impossible to easily “swap” the yard around, or swing it around, to put the sail on the other side of the mast. The doggone thing seems to do it’s work from one side only–or it’s changed only on rare occasions–perhaps when the “prevailing wind” changes.

I also found an image of the replica of the Golden Hinde (that is the basis for the IMAI kit) with a furled lateen sail on the mizzenmast–and the yard is lowered all the way to the deck. The ship is sailing “before the wind” so I briefly considered lowering the yard on my Golden Hind to match the photo–but then I realized that it would look odd and I’d probably break the yard. I only have two kits, and I’ve already broken one of them.

I have a couple of thoughts that I’ll share. One thought is that the lateen rig on the mizzenmast was used INSTEAD of the lower sail on the mainmast–the mainsail. When sailing SLIGHTLY “into the wind” the lateen sail might be used as a pushing sail, in order to utilize the “parasail” lift provided by it. The mainsail would be furled in this case, because the lateen sail aft of it would block the wind anyway.

I’m also wondering if these ships may very well have been designed to favor port or starboard in terms of sailing “into the wind.” They’re not ambidextrous. This would explain why the sail is on “one side only.” The captain knows that his ship is best steered into the wind so that the wind is either coming at the ship for the starboard bow or the port bow–one or the other. That means that if you sail “into the wind” you have to choose the preferred method, not just flip a coin.

I don’t know. What I have learned from this is that I don’t know much. Tim sent me a lengthy analysis (complete with pictures) of 16th century rigs, and I’m willing to bet that the use of the lateen sail was more art than science (in those days) and that the whole thing had an air of mystery about it. Truly, a sailing ship in those days was a big deal. Training the crew would have sucked up boo-coo resources and drained the treasury of all but the wealthiest. To be a sailor was a life, not a job.

My mizzenmast is now naked. I’m thinking that I will still put a furled sail on it, because my model really is supposed to represent a ship sailing “before the wind” which means that the ship has the wind directly behind it. The wind rudder is not needed in this case, and the sail would just “steal” wind from the mainsail. So it’s furled. But sailing is such a complex task, with dozens of jobs building to any simple maneuver and the whole crew having to be on the ball, that what we end up with in a ship model with sails is a “snapshot” of something. Not a snapshot of a ship at sea, since it would be pitching or rolling, but a snapshot of a sail configuration absent all other points of reference.

This is a bit more than most people want to take  on. It’s too abstract. The idea of modeling a sail configuration, without the crew (although I have some crew, really I do) and without the wind and water seems truly bizarre to many ship model fans–hence the hostility to placing sails on a model.

Anyway, I’ve learned something new today and I really, really enjoy that. So, in this case, the ship model went from being just-a-bit tedious to being fun, just as old Lew Glaser intended.