I read somewhere about the idea of adding Tamiya Flat Base to Future and making a clear flat finish out of it. 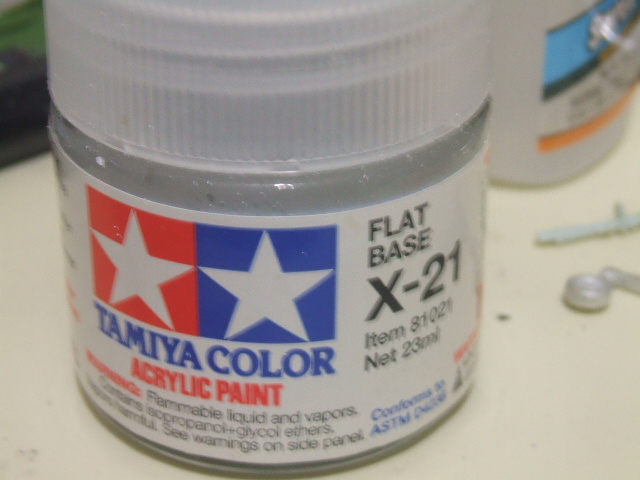 The “Flat Base” is just some kind of silica (ground glass?) suspended in something. It’s added to gloss colors to make them flat. It can be added to glossy Future to make it into a wonderful clear flat.

Is everybody on this page right here with me? Good. If you paint with a brush, you’re going to find a clear flat that can be brushed on to be invaluable. It will take an “ordinary” looking model and make it look great.

But, you have to work with it. Emphasis on the word “work.” You need to mix it carefully. I find that a mixture of one part Tamiya Flat Base to two parts Future, by volume, to be a good mix. Don’t punk out and try to dodge the requirement to measure it. Look down into that jar of Flat Base. Go ahead, look in there!

That gritty, gray material is the sludgy mass of flat base. Notice that the jar is not full. Make a note, or mark it with a Sharpie, to indicate how high the Flat Base reaches inside the jar. You’ll need this later.

Now dump the entire contents of the jar into a larger jar. You need a two-ounce jar, which is about 72 Pico-Royales if you’re using the metric system.

Clean out the jar into that larger jar. Use a brush to get the last little bits. Now rinse out the jar and clean it. Now go back to the workbench and pour an amount of Future into the jar that reaches up to the same spot in the little jar as the Flat Base did when it was in the jar.

Stir this thoroughly (stir it more than you would expect) and then brush it out onto a painted surface. When it dries, it may dry with spots of “frost” indicating the mix is too rich in Flat Base. You need to add a few drops of Future and test again. Eventually, you will get a dead flat, even finish.

The above procedure requires manual dexterity, the ability to acquire a large jar, and, above all, the desire to do it. You may be able to get “store bought” clear flat to work for you– but it never did for me. Always too glossy. Do yourself a favor. Make your own. Once you have realized how great it is to take over your own destiny with regard to clear flat. you may find yourself exploring a whole new world of self-sufficiency. Once the MEK fumes clear out of your brain and you drop your reliance on “companies” to make stuff for you, you may move to Alaska and start hunting bears and make your models out of whale bone you harvested yourself.