I don’t know how to talk about this project without talking about art. I know this makes some guys uncomfortable. I don’t know how to fix that. All I can say is that Jack Leynnwood’s paintings on Revell kits turned me on the world of art. I didn’t know it at the time, but that was what was happening. Today, I still have to make an effort to get past a lifetime of “training” that “guys don’t do art.” It’s damned frustrating is what it is. Dads–don’t teach your sons to be macho.

I guess Jack Leynnwood’s dad taught him to be as macho as possible, or maybe he was just naturally that way, but I don’t believe it. Those who knew him remembered a guy who was quick to deny being an “artist” and even quicker to jump into the middle of any opportunity to prove his masculinity. He was interested in macho things, I can’t deny that. I just wish the guy hadn’t looked so much like somebody over-compensating for something. I didn’t know the man, so I should probably not comment on him, but like I said, I just wish he hadn’t been quite so fast to run screaming from any implication that he was an artist.

Because Jack Leynnwood was an artist. By far my favorite painter, period. Nobody, but nobody could take a few splotches of paint and make it look more real than reality the way that Leynnwood could. His paintings, which he dismissed as hack work, intended to make a quick buck, were alive in a way that other illustrators just can’t reproduce. Compared to Leynnwood, even the “great” aviation artists of today produce paintings that look dead.

In a way, Leynnwood resembled another great American painter, Frank Frazetta. They were both manly men who stepped off into the abyss of drawing and never looked back. Both of them produced incredible work that was dismissed as junk by art snobs. Frazetta’s paintings are now worth huge amounts of money. A word to the wise–if you find an original Leynwood for sale, and you can afford it–buy it.

The image below does not represent a realistic, authentic version of an RAF camouflage scheme applied to a U.S. built bomber. It is an attempt to copy the scheme that Leynnwood cooked up when painting his A-20 for Revell. It’s my best guess as to how that A-20 on the boxtop would have looked, prior to the application of “sand” colored blotches. 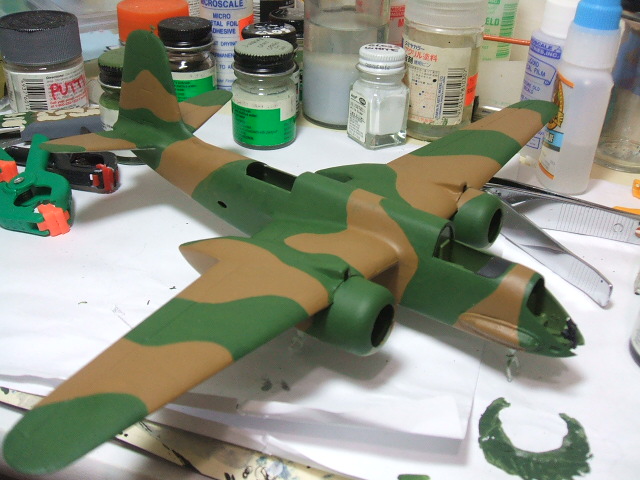 The colors are brighter. The pattern is WAY off (I have MPM and Airfix instructions which show the correct pattern. But when I look closely at Leynnwood’s painting, it’s obvious that he ignored the “official” pattern and invented something. This is my attempt to copy that. 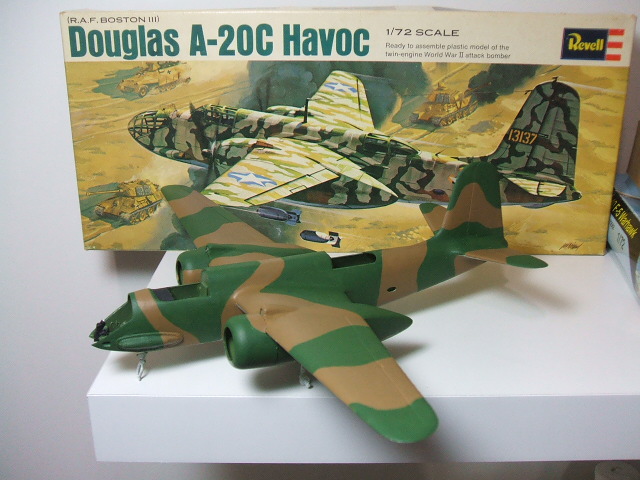 The next step in the process will be very difficult. I have to try to reproduce the pattern of the blotches as they are on the painting.

Now, I understand that these aircraft actually existed. They must have been ugly little spuds. The original RAF camo was overpainted with splotches of what the USAAF called “sand.” It was a pink color that got pinker as the desert sun burned any blue or black pigment out of it. These planes must have been quite a sight. But Leynnwood’s rendition isn’t an accurate reproduction of what these ugly aircraft must have looked like. It’s a painting of an idea, and I’m trying to pay homage to that.