I bought the High Planes P-47N kit on eBay from a fellow blogger who seemed to need the money more than the kit. What I received was a bit of “grab bag” which may or may not represent the way the High Planes kit was when it came from the “factory.” There was no cowling or pilot’s seat, for example. Given the “rough” state of the parts I didn’t mind nearly as much as you might think. I knew from the beginning that I wouldn’t want to build this kit. The only use I would make of it would be to combine it with another kit in order to create a P-47N out of a P-47D. Or M, even.

Which brings us to the Revell kit I had in the stash for donkey’s years. But the fuselage on the High Planes kit was not really very good, and the fuselage on the Revell kit was also not very good, so enter the Hasegawa kit (also from stash) to complete the trinity of High Planes Primitive Kit, Revell Pregnant Guppy, and Hasegawa One True Kit that’s a teensy-bit shy on the detail end of things.

Now I have to take this unlikely collection of plastic, metal and, uh, plastic and try to make a baseball team out of it.

You can see here the weird resin engine that came with my copy of the High Planes kit. Original or not? The Hasegawa cowl contains the Revell front engine and back engine from the Hasegawa kit. Behind it we see the vac canopy, which I happen to like.

I had to cut up the “cockpit tub” provided in resin in the High Planes kit. I don’t know just how the “after market” guys figure it but for the sake of all good things can we at least agree that the guy with the resin cockpit doesn’t need huge retaining walls to force the parts into alignment? One thing I don’t like is an alignment pin or some other structure telling me where to glue things. I admit that a complete lack of  alignment “helpers” is often denigrated in magazine reviews, but I’m not sure why. If you could scratch-build the cockpit, can’t you figure out where to paste up the ready-made resin cockpit?

I carved, chopped, filed and sanded away all the “alignment” helpers and cut away the “front” of the cockpit tub, which will be replaced by the Revell instrument panel. 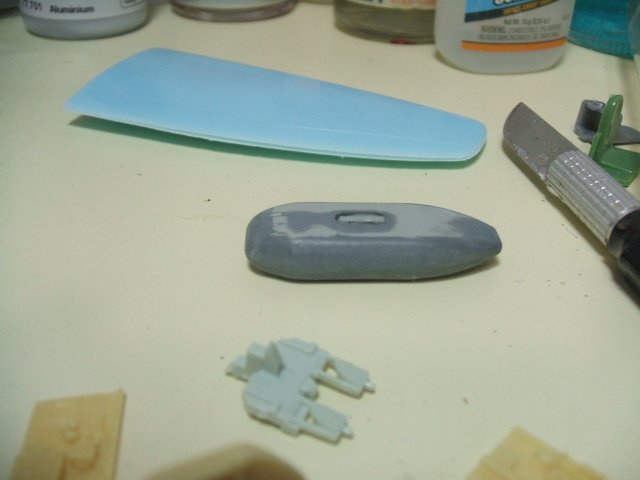 I found a drop tank from a Hobbyboss P-47 (yes, Inspector, the Hobbyboss P-47 hasn’t been in. I don’t think she ever came home last night). I’ll have to look at about two-hundred images of P-47N’s to arrive at a conclusion about it. The Revell kit comes with nifty bomb pylons but the High Planes wings have stubby rocket pylons. Rockets or bombs? Or tanks? Fuselage or wing tanks? Hmmm……..

Somehow, I ended up with the previous owner’s entire stash of P-47 tires, even though none of them are right for the “N” model. Weird. Anyway, you can see the goofy “flattened” or “bulged” tires. I really, really dislike these goofy bulged tires. Fortunately, Revell has some tires in their kit which will work.