Auto theft is real crime. If you get caught doing it as a career, you get sent to a real, federal pound-you-in-the-a** prison. This is the kind of crime that the police get paid to solve, right? I mean, if they weren’t spending all their time breaking up drunken fights between feebs they’d be right on this, right? They’d get their man and that dude would be grass and they’d be a lawnmover, right?

Probably not. I’m not sitting by the phone waiting for word from the detectives that they found our perp. Nope. Not gonna happen.

The story of how our car got stolen is a long one. Car theft is not a “first world problem.” It’s a problem. It’s the kind of thing we watch on TV and play video games about, but it’s not really all that funny when it happens to you. Not funny. Except for that line from Office Space (one of my favorite movies).

We live in a condo now. Almost exactly one year ago we sold the big house and moved to a smaller condo. It was a wise move in many ways. One way it was a wise move is the complete lack of my having to negotiate and fool around with stuff like repairing driveways, installing new roofs, and in general the kind of “home ownership” crap that I really detest.

So when they announced that they were re-surfacing the blacktop in front of the garages, I said “yay.” But it came at a cost. I mean a cost other than the huge amount spent by the condominium owners’ association. We’re not talking about that grownup stuff today. We’re talking about Federal Pound-You-in-the-A** Prison.

Our car isn’t the best car. It isn’t the prettiest, or the fastest. It’s not the most expensive or the most flashy. But it’s our car. We like it. So do car thieves. A 1999 Honda Civic LX Sedan is the car that thieves dream about in their stickiest dreams. They salivate uncontrollably when they think of a juicy Honda sitting in the street, waiting to be stolen. Old Hondas are easy to steal and easy to sell. They are a win-win for sleazy, sub-human car thieves.

So when we parked the car on the street to avoid besmirching the freshly glooped blacktop, we were, in a way, asking for trouble.

Here’s what Little Red looked like when St. Paul’s finest found it in an alley. 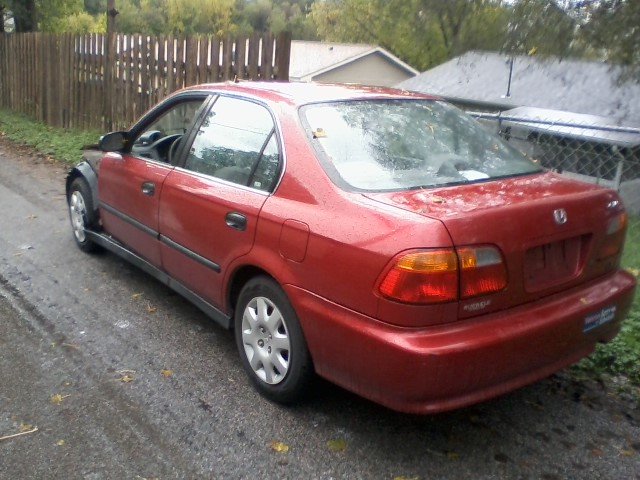 The adventure of dealing with SAFECO (the CHEAP insurance professionals) on a weekend deserves its own blog entry. Right now we’re driving a rental car (Nissan Altima–it’s pretty nice) and waiting to get Little Red totaled by the insurance adujster so’s we can cut our losses and move on.