When I was twelve, Landmark Books were serious history. I read Thirty Seconds Over Tokyo, or The Flying Tigers, or Great American Fighters Pilots and I was pretty damned impressed, I can tell you. 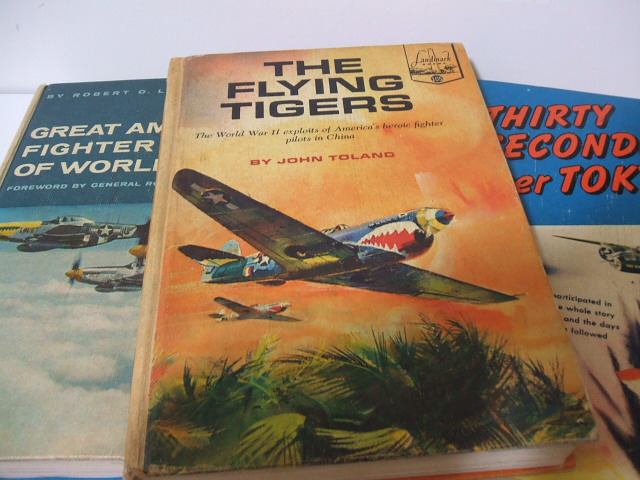 I’m still impressed. I found these books on eBay or in antique shops and I bought them to read. That’s right–I read these. They’re not just cute little nostalgia items. They mean something to me, because buried under a ton of cynical, twenty-first century garbage is some remnant of my original belief system. I’m not sure exactly what that remnant is. It might be part of a drive shaft and it might be a scrap of upholstery, but somehow, it is all that remains of what was once a shiny new 1969 Faith in the System Classic Convertible with an V-12 engine and some kind of thing called a turbo supercharger.

I thought I understood what kind of guy would sacrifice his leg to bomb Tokyo…long before “Tokyo” came to mean Hello Kitty. I thought I understood “Old Leatherface” and his crazy band of misfits who dared to challenge the Japanese Empire in China. I even assumed that I knew what the Eagle Squadron was all about, as Americans volunteered to fight the Nazis.

So now, I do find it comforting to read these books and be reminded of what I thought it was all about. Once upon a time.