As I sit here and ponder the end of my novel “GRRR” and the fact that, according to rumor, the Rolling Stones took my title and made millions off it while I toiled away for your entertainment seeing little or no compensation…

…I have visited a few forums and seen what happens when a newbie asks “what type of paint is best for brushing?”

Airbrushers don’t know shit about brushing, yet they recommend paint to the newbie and lead him or her on a downward spiral that will surely end with a sad and exhausted hobbyist crawling into the airbrush store on skinned knees, begging for relief like that girl in the German folktale who begs the woodsman to cut off her feet so that she can stop dancing that still gives me nightmares and reminds me as to why I don’t like Germany very much.

My reviews need to be “recalibrated.” It should have one star, not two. The fact that it has many colors and is widely available shouldn’t affect the “score” as much as it does. I mean–you get the color you want, and you find it at the store.

Actually, availability and selection should be a BAD thing when we’re talking about something bad. Like having instant access to any number and color of rabid wolverines. “Just push this button for any size, sex, shape, color or style of rabid wolverine of your choice (honey badgers extra).” 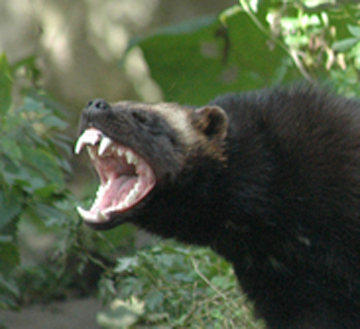 No thanks. Not even if I was trapped at a Motel 6 in Lubbock, Texas.

There are clear and definite differences in “brushability” in model paint. It’s a big deal, not some trivial thing that some forum jackass should just shoot off his or her keyboard at without warning.

A note about Badger Model Flex.

I got a “newer” squeezy bottle of this paint and it proved to be “ready to airbrush” and unusable (I threw it away). However, older (plastic) JARS of this paint all seem to be useable. Unfortunately, if you mail-order the paint, you may not be able to choose whether you get the “new formula” or the “old formula” and if you find a helpful clerk who can straighten that out for you that person should be hauling down six figures in Hollywood or New York and not wasting their time selling hobby paint.

I’ve decanted my Hataka Blue paint into glass jars. I also acquired some additional Army Painter Warpaint and put that in a glass jar as well. The process is not that hard and I’m too lazy to take photos and walk you through it, and no, I’m not going to make a video.

But the process is SO satisfying. Like butchering your game.

You get a pair of pliers and yank out the nozzle. Then you pour all the paint that’s easy to pour into the jar. You’ll need a one ounce jar because, as part of a happy trend, model paints tend to come in larger quantities than they used to.

Once you’ve poured out the “contents” you are not done! You need a big old sharp (careful!) utility/carpet/flooring knife to slice off the top of the bottle. Take a big flat brush and scoop, draw, or scrape the paint/pigment in there into the jar from the bottom of the bottle. This isn’t just a matter of being frugal it’s because the PIGMENT is often at the bottom of the squeezy bottle and you need ALL that shit to get the right shade.

The Hataka RLM 71 was NOT the right color until I did this, scooped all the brown pigments out of the bottom of the bottle into the jar and stirred the hell out of it. THEN it looked like RLM 71.

I put my recent purchase of Vallejo Metal Color Gold into a glass jar and found a damn ball bearing in there and I had to remove the sumbitch with chopsticks. Lucky I mastered the damn things in Korea or the ball bearing would have splashed out into my jar and made a mess.

This particular shade of Metal Color had a very, very familiar odor, too, that also reminded me of The Land of the Morning Calm.

So far, I ain’t drunk none.