A brief entry today about the mysterious “71/02” camouflage that is all the rage and shows up time and time again as the way to paint a “Battle of Britain” Me-109E. I think it’s malarkey. Here is a drawing of the “splinter” pattern for a “pre war” Me-109E.

Notice that the pattern is the same as the one that’s supposed to be the “02/71” scheme. 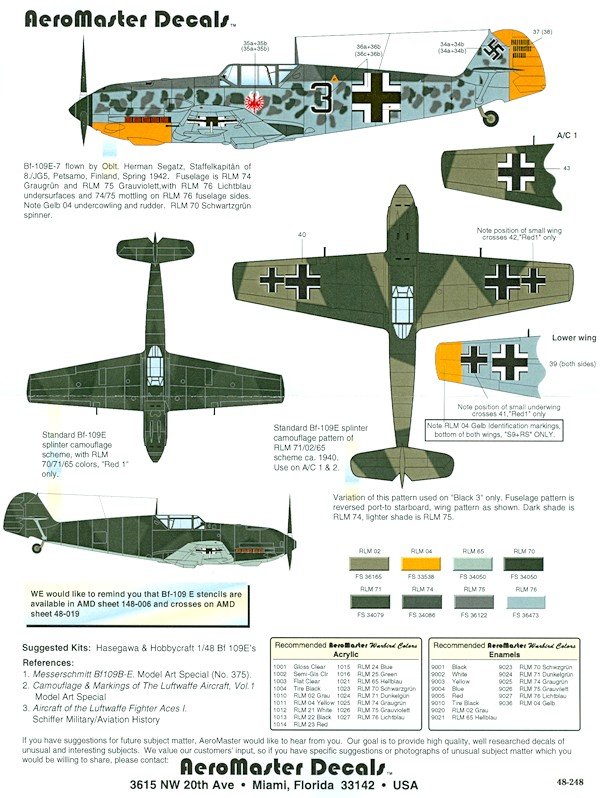 There’s just this one thing. In order to make the original splinter into the “02/71” scheme you can’t just repaint the RLM 70 with 02. This gets “implied” a lot. It’s like the used car guy implying a warranty that doesn’t exist. Very sneaky.

So it’s not some kind of “field mod” paint job, done that way. It’s an overall repaint, and when they did an overall repaint, I’m convinced that they went ahead and painted the 74/75/76 scheme that became that standard at that time. OR they left the upper surface colors alone and just took the RLM 65 up the sides, and later “mottled” the fuselage (and probably the wings, too) with the beige colored RLM 02, sprayed on in spots over the RLM 70. And maybe the RLM 71 also. But THAT was a temporary scheme until they repainted the aircraft.

To me, the 02/71 idea is a weird, faulty theory. It assumes that the Luftwaffe didn’t repaint their aircraft right before the Battle of Britain with “new” colors, because no “written orders” exist saying that they did, so the “experts” just made up this weird theory using the paints that they consider to have been available. It’s the worst kind of stuffing a square peg into a round hole to make a theory work. It’s silly.