The very plastic sails in this very plastic model are non-starters as provided in the kit, even though they are probably the best vac-formed sails ever made, they still suck. After studying the problem, I arrived at what I think is a way to make them easier to install and look better after installation. I’m gluing thread to the sails in order to mimic the “sewn in” thread on “proper” model sails made from handkerchief or silk rescued from Eddie Rickenbacker’s 1905 Speedwagon.

The problem with the kit sails is known to me from my earlier adventures (many years ago) trying to build this kit, as well as a Revell (small) Constitution, a Revell Stag Hound, a Revell Charles W. Morgan, a Revell (medium sized) Thermopylae and a Revell (large) Cutty Sark.

When lined up like that, it all looks pretty pathetic. The only ship kit I completed was the medium-sized Thermopylae. All the other ship kits ran aground on the shoals of tube glue, limited skills and improper tools.

That was then. This is now. The plastic sails on these kits will rip, tear and otherwise fail if you take a straight pin and poke holes in them, then run thread through the holes in order to tie them to the yards. DO NOT DO THIS! Don’t let my sacrifice of a half-dozen valuable plastic kits be in vain! I learned the hard way. The sails need to be 1) modified, or 2) replaced with cloth (HAH!) or 3) discarded and not used at all.

I tossed a coin to determine their use and now I have use the sails or risk outraging Poseidon. As I pointed out in an earlier post, I’ve done some preliminary work to find out what kind of glue might work to attach thread to flimsy plastic. 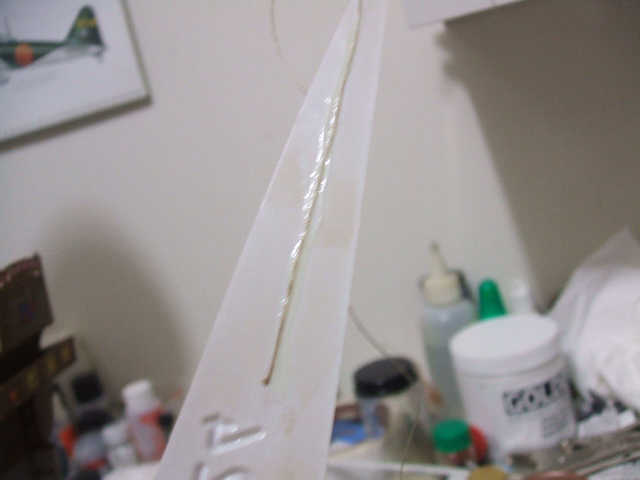 This stuff won the glue-off. 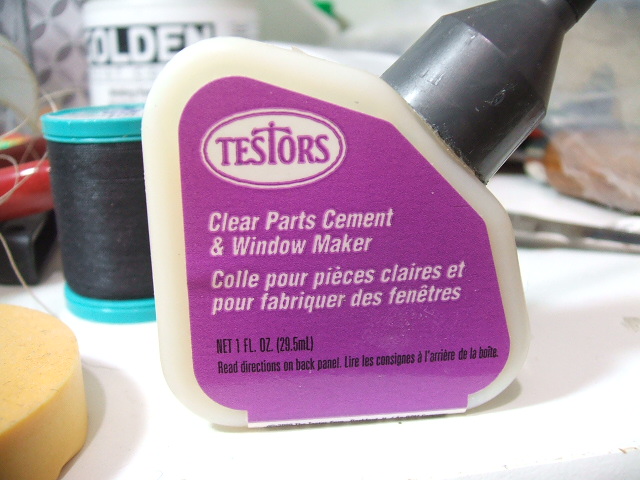 It’s really not bad as cement. It glues most stuff to most other stuff, is reasonably non-toxic (no chemical smell) and dries up good and solid. I decided to use masking tape to carefully mask the area where the glue was to be applied. I think this is Tamiya tape. I don’t mask for painting so it’s been in my tool collection for a good long while. 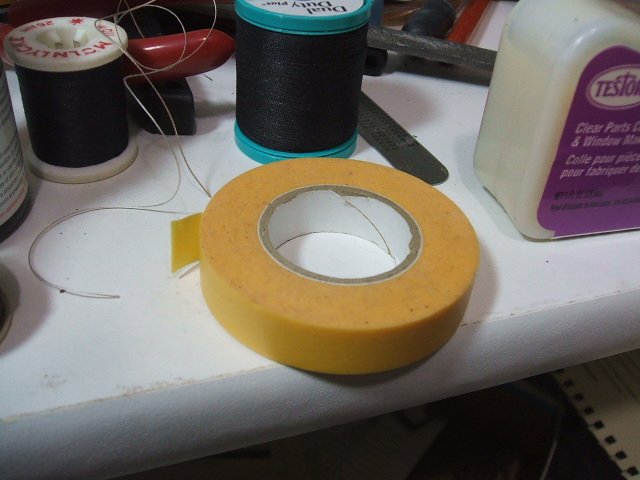 The mask is applied. The glue is applied using the handy spout. Then the thread is put in place. The glue is sticky enough to make this process work. Stickier than PVA glue, for example. 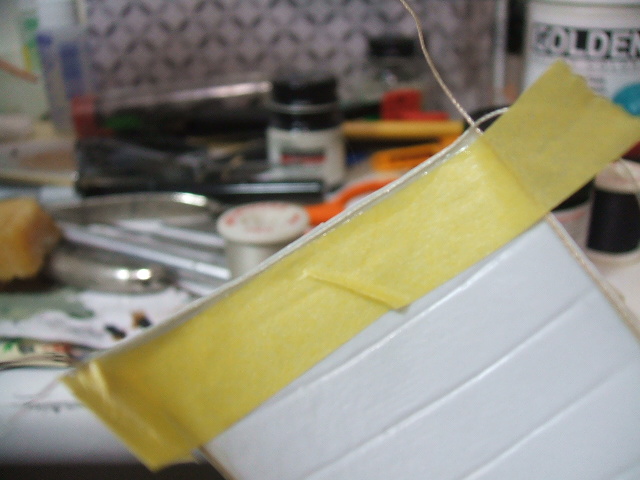 Thread is “run” around all edges of the sail. The sail is first cut out using scissors, which is my preferred method for dealing with all things vac-formed. The glue sets in a few minutes. I removed the mask before it fully cures to avoid any nasty accidents. 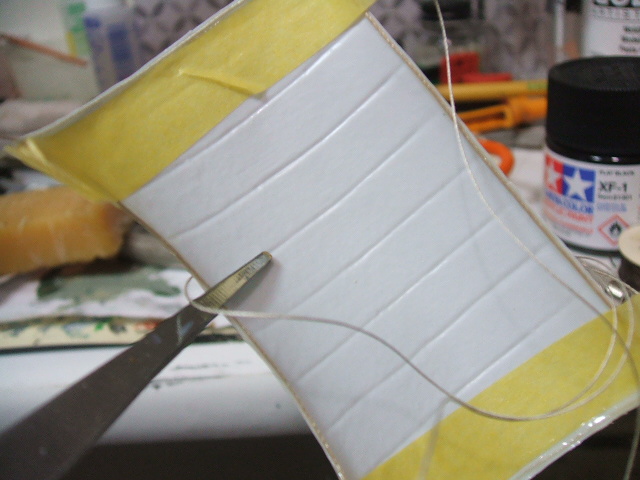 The finished product looks good and the thread is firmly attached. 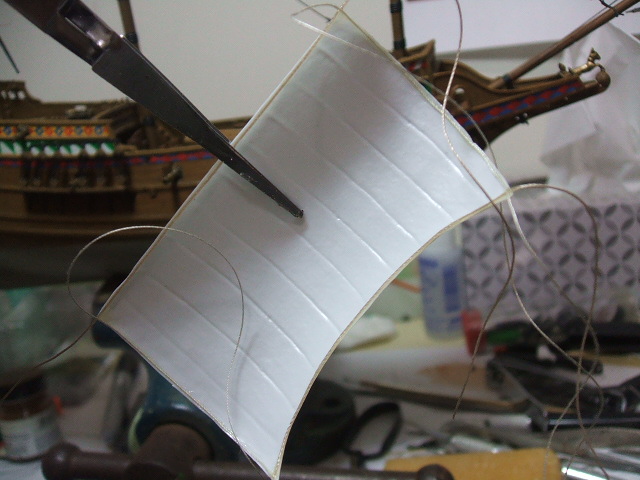 Here is the rat’s nest that’s supposed to depend upon the tear strength of the flimsy sail, after it has been given a hole-punching using Mom’s sewing needle. NO WAY. 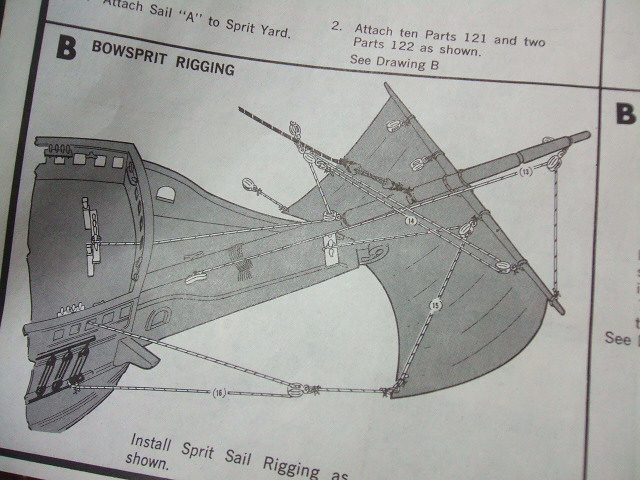 You need some thread that is attached to the sail that won’t tear off under stress. 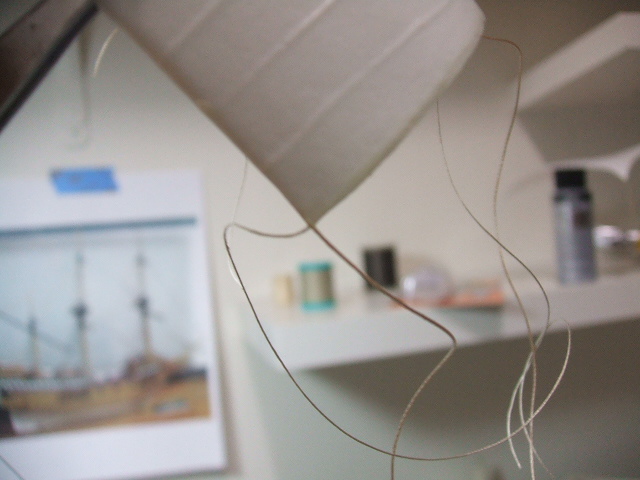 I’m using ordinary khaki household thread. After fooling around with heavier thread I realized that this is the proper stuff if I expect this model to look “good” as opposed to “oops.” 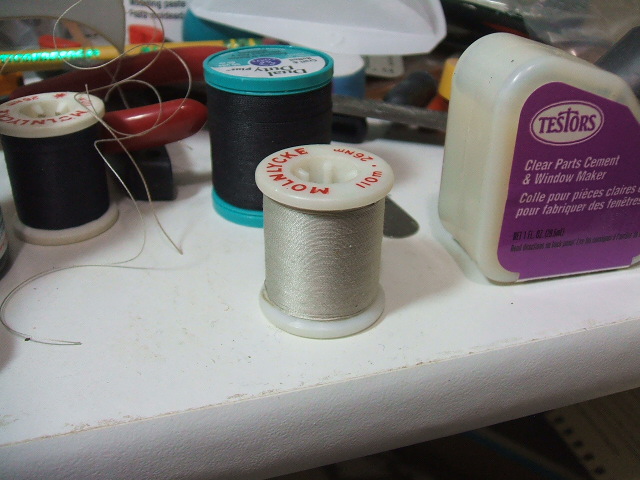 All the sails will need this treatment. I’ll be gluing threads to sails for a while.