One of the things that irks me is the tendency among certain younger, hipper people to declare that there is always something new that is the best ever–that there is no category of things where the old ways are still the best. New trumps old every time, and only washed-up old guys insist otherwise.

Well, as  washed-up old guy, I take issue with that statement, as a matter of fact. Some old things are better than ANY new thing. Technology does not always produce something “better” just because technology is more advanced. Sometimes, “better” means more than just easier, more efficient, cheaper and quicker. Sometimes better means something else.

Here’s a question. Why are the old, somewhat legendary ship kits from Revell, especially the nearly mythical 1/96 scale kits, taken by some people as not just a part of the hobby of plastic model kits, but as a hobby unto themselves? I mean, for some people, Revell’s big Constitution isn’t a part of their hobby, it IS their hobby. They built one Constitution, and they’re building another, better one. They’ve been at it for twenty years and may be at for anther twenty. The Revell kit–a single kit–is their hobby. Now let’s remember when the old Constitution first appeared–1965. By my math that’s fifty years ago, and since then nothing has topped it.

This model was created by a man who believed in something. Lew Glaser intended his legacy to be the Revell Constitution and other kits like it. It wasn’t just a money-making scam. It meant something. The whole concept of it was new and innovative. The idea that “Joe Average” could build a “museum quality” model ship sounded a little nutty, but when you examine the instruction sheet you begin to see what Lew Glaser was trying to do. He was trying to bridge a gap that seemed un-bridgeable. He wanted to make model building into the national pastime, and do it in a legitimate and respectable way.

I don’t have the Constitution instructions but I do have those from the Golden Hind. You can see the attention to detail. 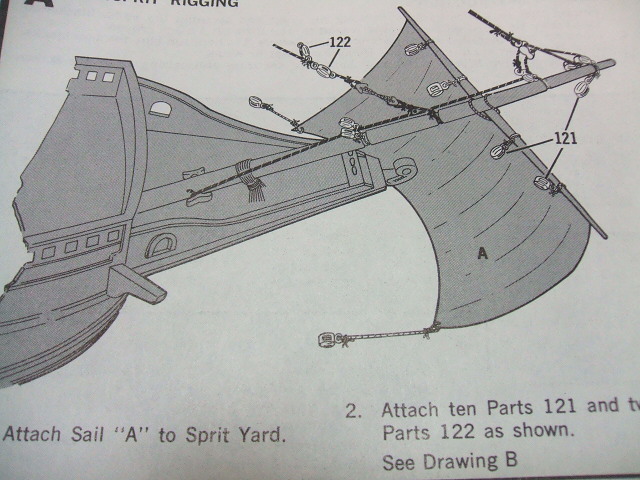 It’s a basic education in sailing ship rigging, included in a model kit. It’s not the “be all and end all”–it’s a beginner’s version. But for what it is, it’s a masterpiece.

We tend, nowadays, to subscribe to the stupid idea that you are either born to do something or you’re not. Effort isn’t seen as being such a big deal any more. Only innate talent really counts, and if you have that, then you can go to work. Otherwise, flake off. It’s a shallow way of looking at the world that somehow reminds me of Roman emperors giving the “thumbs down.” I don’t know about you, but for me, effort counts for something. And the best way to expend that effort is to start at the shallow end of the pool–with the “beginner” settings, on a “simple” project and then build a set of skills from that. I’m not saying that competitions should be reduced to “who tried the hardest” contests, but in everyday life we learn over time through effort. Talent is good–I like talent. But declaring that only talented people should play is wrong. The idea that being naturally good at something is some kind of indicator that you’re “chosen” to do that thing is wrong.

The only measure of what you’re “chosen” to do is desire. People who push the agenda that we are all given a purpose and our talents indicate what that is are missing the point. Desire finds a way. It’s not how you rate in some international ranking system, it’s how well you do by your own standards.

When Lew Glaser made the old Revell sailing ships, he was saying that everyone could, and should, build a model ship if they wanted to, and maybe even get good at it.