Airfix just released a new 1/72 Me-262 and it has exactly the same paint job on it that I went to some trouble and expense to get for my “one of a kind” model. 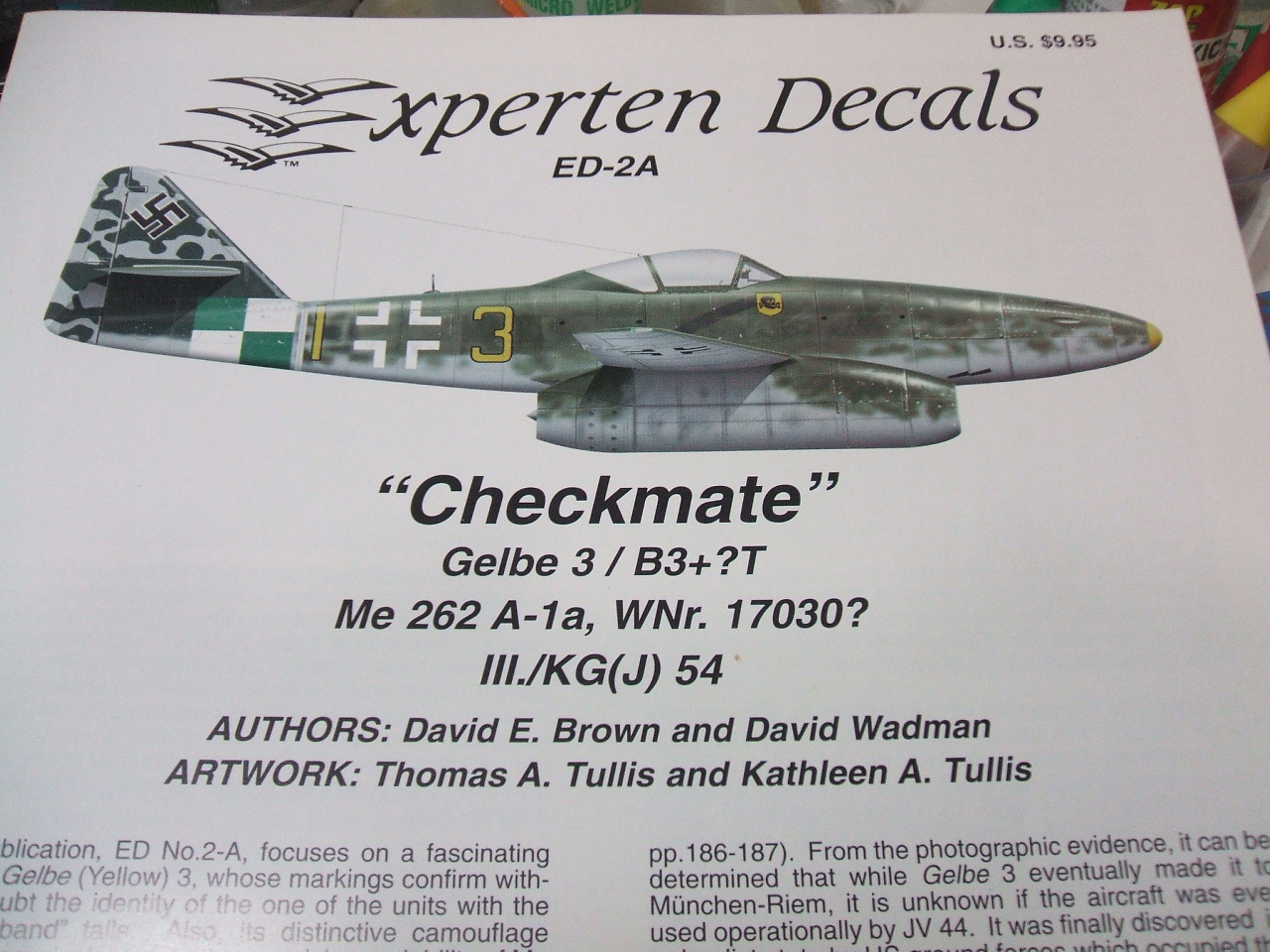 Experten Decals released this booklet with a sheet of decals intended to portray an aircraft KG 54 very late in the war. I was very impressed by the quality of the booklet and they way that the authors shared their sources and their conclusions. This type of research will become, I hope, more and more common and will push out the “take my word for it” school of research that has clogged up the information pipeline in the plastic model world like a huge, sopping mass of semi-dissolved paper.

This attention to detail must have caught the eye of someone at Airfix because I’ll be damned if they aren’t using EXACTLY the same scheme in their latest kit. 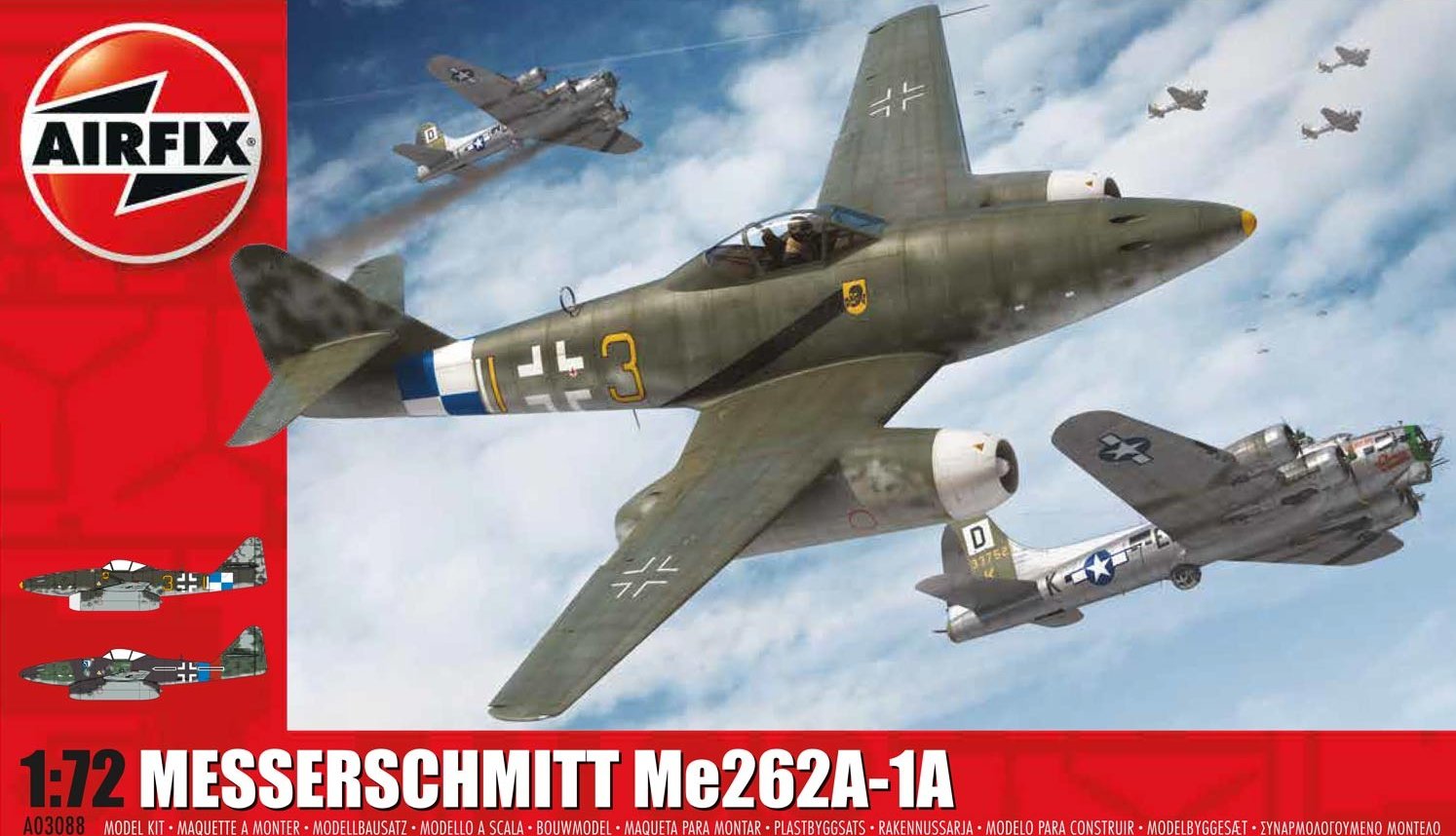 Let’s get back to Experten Decal’s take on this beat up old war horse of a jet plane. I like the way they share the images that they interpreted to arrive at their conclusions. Like this one: 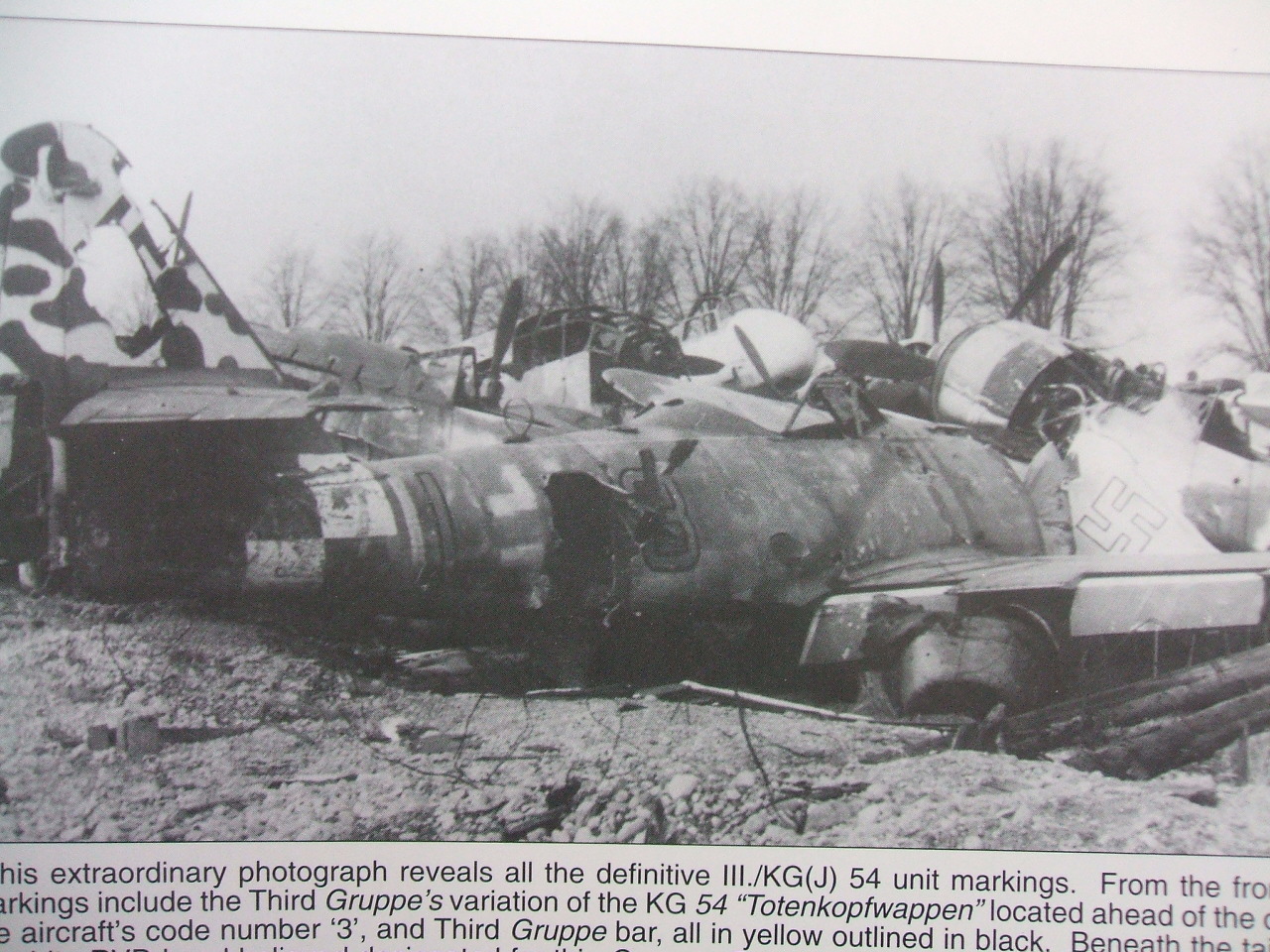 Man, that is beat up. 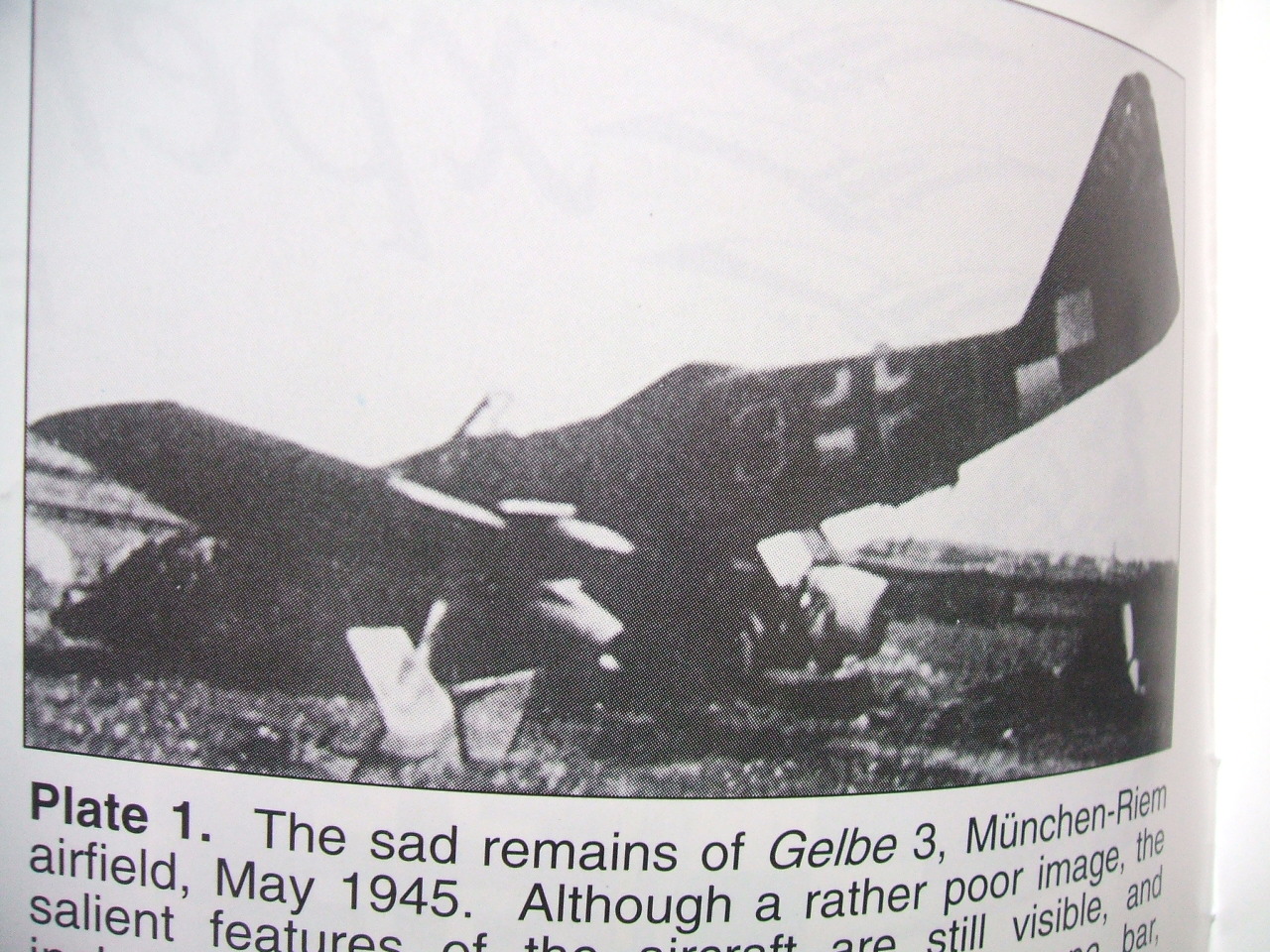 “Poor image” is right. The guys at Experten include some unfortunate techno-babble to try to sell their interpretation. 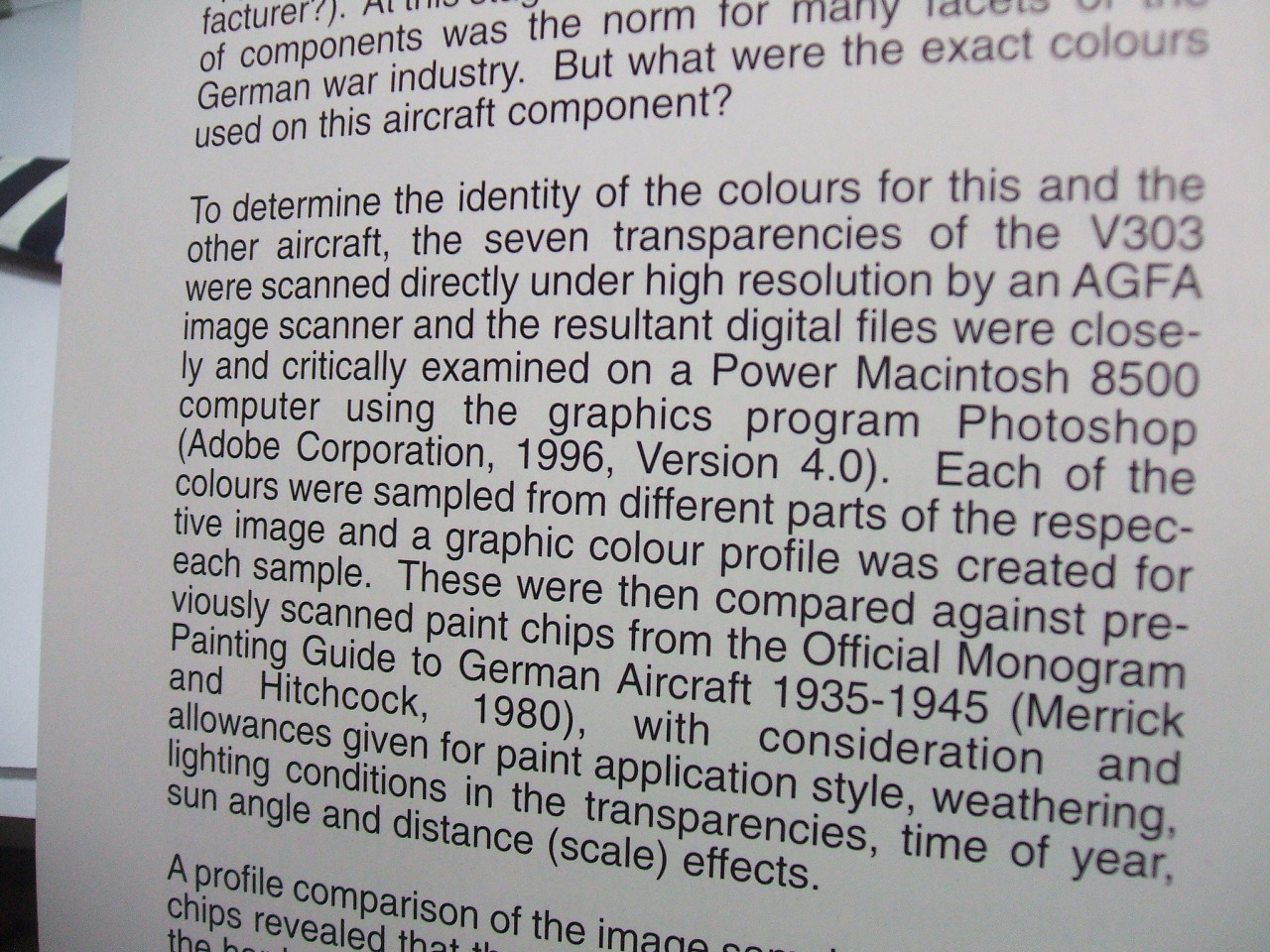 Oh my. I am so impressed.

Well, the beautiful thing about all this beautiful transparency is that I am free to make up my own mind. I don’t agree with the author’s conclusions. At all. I don’t think all the Power Macintoshes and Monogram books in creation can make a terrible old monochrome photo give up certain shades of green.

But one can guess–and I say that I can do a better job of guessing than these guys. I look at that photo and I see a plane that was painted in standard Luftwaffe bomber colors. Black green and green. Or some very close equivalent. I see that with perfect clarity here in this COLOR image (not colorized) which our friends at Experten also scanned into Photoshop. 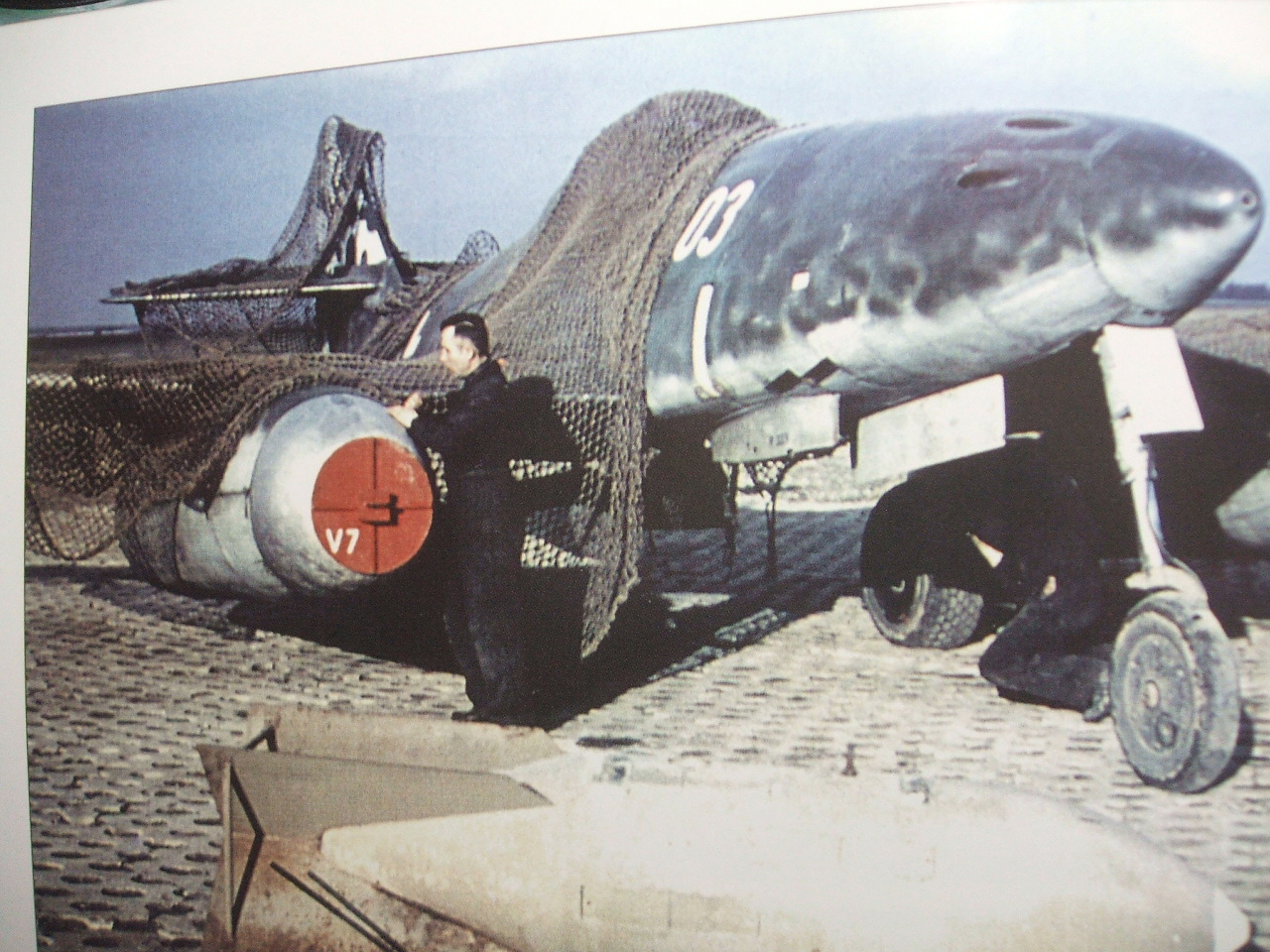 (Pop quiz–what color is the bomb? Those of you who shouted out “02” can leave now and get yourself a Popsicle on the way out.)

Me-262’s went around disguised as bombers for the longest time because Crazy Adolf wanted it that way. Even when they went up to fly bomber killer missions they were painted up like bombers themselves. This meant green and black green. You can claim that the green was RLM 83 or whatever. It was very dark and very green. The reason that the Experten guys don’t see two colors is that we have been led down the garden path with late-war Luftwaffe planes having a bright, light green and dark olive brown camouflage. Well, no color photos support that. They support a very dark green AND a dark olive brown. Both dark, just like in the 70/71 paint job of the Luftwaffe at the start of the war. Two colors so close that it’s tempting to declare them to be one color. But that would be a mistake.

There is plenty of evidence that the aircraft (yellow 3) was painted in a “splinter” pattern. I can see it, and that’s all the proof I need. My vision trumps all the experts at Experten. That stripe from the insignia down does appear to be a more colorful stripe that was painted over. I’m of the opinion that the tail was replaced at some point, hence the “stripe” at the point where the tail may have been removed and replaced with a new item.

Anyway, I’m not in agreement with the “one solid color” idea.

You can see from this example just how flimsy the evidence usually is for a nice, clean, colorful profile. You let your imagination run wild and from an old photo you get something totally unlike the original and the builders of plastic model kits accept it as the truth.

In the meantime, I’ll be using the Hasegawa kit I’ve had in the stash to make up MY version of old yellow 3.