Looking at the bottom of the Hellcat, you notice one thing. That’s alotta white. White paint is supposed to be yet another bug-bear for brushpainters, and is supposed to send me crying for my airbrush.

In this photo, which I’ll reproduce here in addition to the wonderful Cinerama version above, we have the Matchbox Hellcat fuselage half that was used as a “test dummy” to prepare for this build. You didn’t think that I just threw it together, did you? It may look like I just grab Hobbyboss kits off the shelf and toss them up in the air and have them fall fully assembled, but in addition to that I also spend a great deal of time and energy preparing the paint. As I’ve mentioned before, I don’t really care much about building. It’s the paint–the chemistry, the color, the application process which intrigues me. 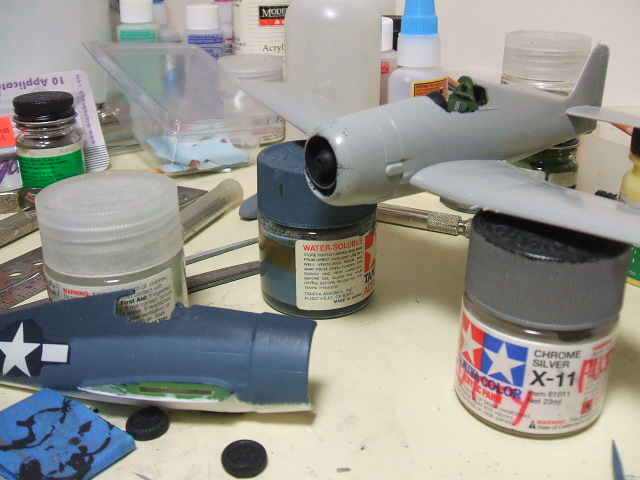 That ancient kit from the venerable Matchbox of England stank so badly it caused me to have to hire a fumigator, but it did come in handy for destructive testing. There you see the colors, applied and the stippling completed to render the truly jazzy Navy camo of a few months in the middle of the war– in between the failure of the blue-gray and the rational adoption of the slick overall dark sea blue.

This camouflage was also a failure. Blue is a tricky pigment. Expensive and so difficult to work with that most of world didn’t use it in large quantities for anything. Despite rumors to the contrary, I’ve never seen believable evidence that anybody else painted their planes blue. But the U.S. Navy wasn’t just anybody else. They wanted blue planes and the result was a rainbow of colors– all the result of fading under the tropical sun.

If you have not experienced the tropical sun, you really don’t know what you’re talking about when you speculate on its ability to fade pigment. It will burn your hide off and bleach everything to a crackly crunch. I left Kunsan Air Base, Korea in 1983 with white skin and a green badge on my pocket giving me access to the flightline. I returned from the Philippines two months later with a yellow line badge and dark brown skin.

I can only imagine the effect of these high-energy ultra-violet rays on this relatively unstable blue paint. Hellcats in battle over the Philippines turned grey and pale blue and every other color. The fleet’s aviation assets looked downright funky. There is no way to write “rules” on how these aircraft should look as models, except to say get a color photo and try to copy it. If you can’t find a color photo, then make something up. Just don’t believe any “expert” who claims that the aircraft had a “standard” appearance. They didn’t.

Now getting back to white. That Hellcat belly is seriously white. To tame it I’m going to use Tamiya GLOSS white. It will go on last, then allowed to dry for a good long time, then a clear flat will be applied, then the stippling. The idea here is to create a replica of one of these Hellcats BEFORE it was subjected to the tropical sun blast. Furthermore, the underside of this airplane will be allowed to remain somewhat white, despite the reality of a huge amount of oil, grease, exhaust and other gunk dripping down through the airframe and squeezing out between the panels on the under-surface. Aircraft bellies get pretty filthy. That’s the true measure of a weathering job– is the belly filthy?

Finally, a word about paint compatibility. Never, ever apply a flat paint over a gloss one. Never, unless you “flatten” the gloss paint first. If you ignore this advice, you are not allowed to cry on me. I warned you. Gloss over flat is fine (usually). The only exception to this rule that I have ever seen is the amazing Vallejo Metal Color, which can be overpainted with flat paint. But that stuff is one of the items recovered at Roswell, so I’m not too surprised.

I’m planning on making a video of the basic painting and maybe one on the stippling process.