It’s hard to think of a definition of the word “hero” that doesn’t fit Jeff Ethell. The guy single-handedly dug back into the history of World War II and found the color photographs that had been taken of aircraft, many of which were taken by Americans using American Kodachrome film, which means that the colors are as true and vibrant today as when they were shot. I have a couple of his books, and they are worth the trouble to find them. The ones pictured below are WWII War Eagles: Global Air War in Original Color by Jeffrey L. Ethell and Warren M. Bodie, Air Command by Jeffrey Ethell, and one “non-Ethell” book: U.S. Navy Air Combat 1939-1946 by Robert Lawson and Barrett Tillman. 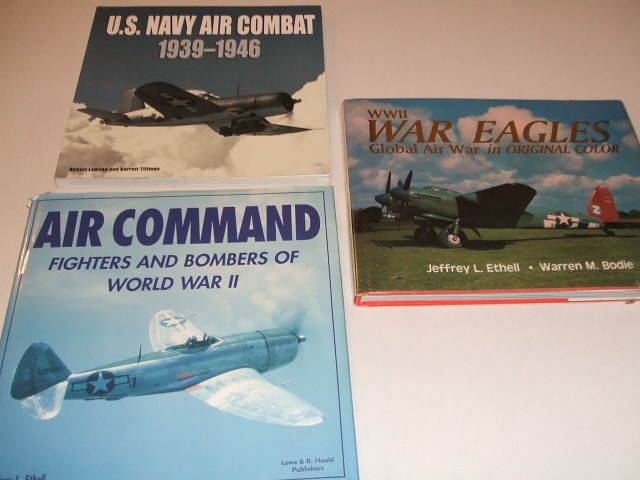 What makes these books special is the Kodachrome photography. I don’t know how they rate as history, and I don’t care. I get a ton of history out of every photo.

Ethell met an untimely end in a P-38 crash. His photograph collection is on-line at http://www.ww2color.com/ but that site seems to be down for me right now.

Anyway, I thought I’d post a few images from the books.

These are lousy images shot with my cheap digital camera of the open books. The actual images are amazing in their clarity, detail and depth.

I cannot, for the life of me, imagine why we model builders do not celebrate this amazing discovery with more collective enthusiasm. It’s a mystery. Kodachrome retains its true color over time, and these images are a pretty good representation of how the original looked.

Anybody who says that photos like these shouldn’t be used as a reference for painting models is either selling a book or has gone insane. Or both (this isn’t unheard-of, unfortunately). No one in their right mind would deny that this collection of color images is as good as we are likely to get. All the references in the world, including silly listings of paint chemistry and written orders from the Headquarters of Colonel Blimp– are rendered invalid by a single Kodachrome image.

This is one reason why I try to avoid certain forums. Saying that images like these are “not reliable” is nutty. I don’t know why, but when somebody acts like an expert and throws bizarre ideas like that around, I get annoyed.