Before I can begin building a model I have to have a good idea of how to solve the worst of the problems. I’m not a “I’ll figure this out when I get there” kind of guy. I like to have a plan. This Revell A-20C is going to be a tail-sitter if I don’t put weight in the nose. The best weight for this sort of thing is old-fashioned lead fishing weights. I don’t recommend these babies for fishing, but for this purpose they’ll do. Don’t put them in your mouth or give them to the baby.

The first challenge is to determine a place to put the weight. In this case that is quite a challenge. There is, at first glance, no place to put the weight. Now I know from past experience (I’ve built this kit a couple of times in the distant past) that putting weight in the engine nacelles just won’t do it. You need to get as much weight as possible as far up front as possible. Even then, I don’t know. This will be a little dicey. It might still end up on it’s tail. We’ll see.

The first thing I had to do was find a way to put some weight in there that wouldn’t look too weird. Now, I’m just not too concerned about the absolutely correct wiring on the bomb sight or the hoses on the oxygen tank. In other words, if I can stuff a weight in there where it ‘s not too obviously goofy, I’d rather do that than have a lame tail stand. That’s just me–I don’t like tail stands. Maybe it’s OCD, maybe it’s do-re-mi.

Weight number one will go in the nose right under the glazing. I had to cut part of the “bombardier’s seat” away in order to find a place to put it. 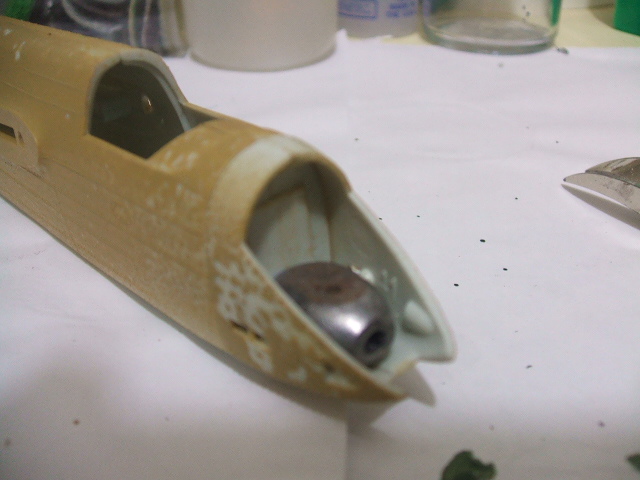 In order to fit it in there, I had to put it in a vise and squeeze it flatter. I think it fits OK now. It represents a duffle bag. Yeah, that’s it. A duffle bag. Paint it O.D. and nobody will ever know.

Then I found a way to put a flattened weight just above the landing gear and under the cockpit floorboard. That’s right. It’s another duffle bag. 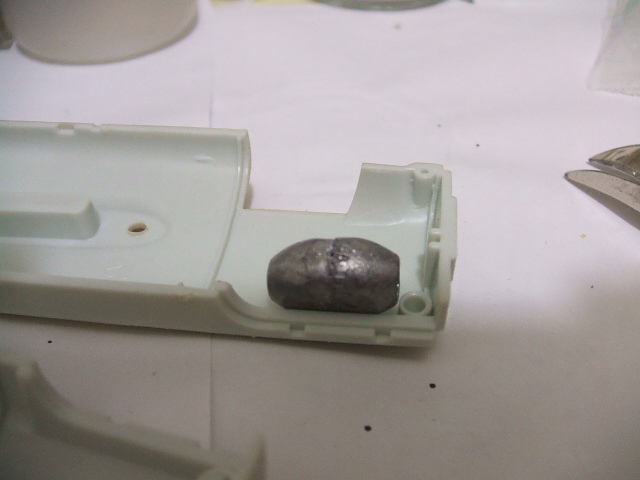 They look just like duffle bags. Or maybe rubber rafts. One might be a duffle, the other a raft. It depends.