This is a site you’ll find if you search for “Douglas Bader Hurricane” on Google. It’s a kit review by a fellow named Tom Cleaver, who seems to post a lot of information on the web. Unfortunately, his review is a bit mad.

Here’s the mad part, taken from the review itself:

Now then, P3061 and V7467, being odd numbers, should properly be in the “B” scheme.  I found a photograph at the “WW II ACE STORIES” website (shown here for instructional purposes), which shows Bader and his pilots standing in front of a Hurricane I. His squadron leader’s marking is very obvious, and the “LE” squadron code is identifiable; this is definitely a Bader airplane.  It is also equipped with a deHavilland controllable prop, and it is in the “A” scheme camouflage.  Given that information, it is easy to see that this is the second Hurricane Bader flew, the one with the unidentified serial, which is certainly an “even number” serial.

The information about painting “A” and “B” schemes is not “rocket science,” it wasn’t lost with the Dead Sea Scrolls, and someone who has the reputation Caruana claims for himself should have this information tattooed on his frontal lobes.  The people who claim to be the “experts” are supposed to figure this out so their customers don’t have to.  Once I was aware of the mistake, it took me a whole total of 3 minutes to find the relevant information and draw the relevant conclusions from the evidence at hand.  It wasn’t hard at all, and modelers deserve better from Caruana.

Here’s a famous photo of Tuck’s Hurricane, so absurdly famous that it’s actually on page three of the Profile Publication on the Hurricane I.

Tuck’s Hurricane has serial number V6864 (an even number by my math) and is wearing the “B” scheme. The Hurricane closest to the camera is V7137 (odd number) and it has been painted in the “A” scheme. Now, either Mr. Cleaver is way off base or I am. You decide.

I think that Mr. Caruana had it right. Unfortunately, I see this type of thing all the time. Somebody is off base and nobody catches the mistake, and it just takes on a life of its own. At least Mr. Cleaver is sensible enough to tell us that his source is an old “Camouflage and Markings” publication on the Hurricane.

Well, it could be wrong. I’m not going to waste time proving that it’s wrong. But the odds that one photo with two Hurricanes showing that even numbers have the B scheme and odd numbers have the A scheme is all the convincing I need. This type of thing is easy to foul up. It’s very easy to put an “A” where a “B” should be, and make an error that will live in infamy.

This is the kind of stuff that gives us internet crazies a bad name.

Now I have to search through the decal stash and find some roundels for Bader’s airplane. 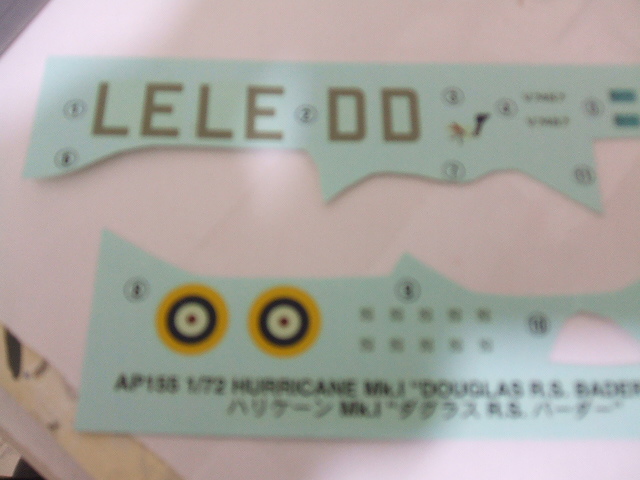