Some blogs are about plastic model kits, and some blogs are about AVIATION HISTORY and only a few are strange and uncomfortable mixtures of both. Well, welcome to Discomfort Land! I found an image of an F-16 on the internet that looked a lot like an airplane I used to work on. I was going to use it as a reference for a potential build, and it gave a dandy view of the underside of an F-16B of the old LANTIRN Test… something. It would be easy to assume that all military organizations have spit-and-polish organizational charts with official names given to all units at all times, and that old duffers like me just forget them. But that ain’t necessarily so…

I have two quasi-official documents (rosters) from the 6515th Test Support Squadron, and each of them refers to the F-16 gang as “branch.” So I guess it was a “branch.” The F-16 Branch was subdivided into the LANTIRN gang and the non-LANTIRN gang, but this wasn’t exactly an official thing and a lot of confusion at some level existed because the chain of command was rather “loose as a goose” and the whole thing was entirely too relaxed to be believed by any wide-eyed youngster trying to understand “military” stuff. I worked in the LANTIRN Branch of the F-16 Branch. I guess. 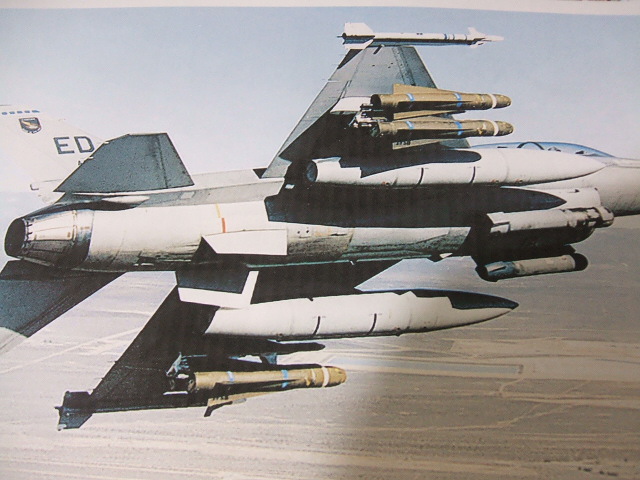 Notice the misalignment of the orange stripe above the ventral fin.

I noticed it and I remember why it looked like that. The LANTIRN Branch had been having some trouble with small cracks appearing in the structure of the panel to which the ventral fin APPEARS to connect. Actually, the fin is held to the airframe by two large bolts at the center, one outboard and one inboard (you can see what looks like a smudge at the center of the fin/fuselage seam– that’s it). The fin is held on by the bolts, and is intended to pivot slightly– very slightly. Unfortunately, the technical orders at the time weren’t detailed enough to specify the exact installation of the fin, so we “glued” the fin the panel, instead of using the “glue” (an epoxy material) to create a gasket to fill the crack between the fin and the fuselage, as intended. The “glue” wasn’t glue at all–it was supposed to be used to make a gasket, which would be exactly the right shape and size because it would be made “in situ”– right there on the fin, using a releasing agent (like petroleum jelly or petrolatum) to keep the glue on the fin from sticking to the fuselage.

It was pretty clever but difficult to describe, so we fouled it up. Eventually, General Dynamics sent Les Patton (General George Patton’s nephew) to check out the source of structural cracks due to buffeting from LANTIRN pod turbulence. He noticed immediately that the fins were glued to the panels and this was a no-no. We (he and I) removed the fins from the airplanes and re-installed them properly, and then trained the rest of the branch on the proper procedure.

Until we determined the cause of the problem, we found a lot of cracks inside the panel and we had to repair it. We would find a crack, remove the panel, send it to be repaired, and it would come back painted in a number of peculiar ways. 635 here is showing one of the many colorful solutions to the panel painting problem. The stripe is in the wrong place and it’s the wrong color. Keep in mind that this was in peace-time, at the home of homesteading senior NCO’s where the coyotes howled and the roadrunners ran. It was peaceful and quiet. But things went wrong, especially with painting those panels, for reasons that I’ll never know.