Lew Glaser, the founder of Revell, had a dream. It was a slightly mad dream, but all visionaries appear to be slightly mad. He saw a Revell USS Constitution or HMS Bounty on every mantle, and he actually tried to pull it off.

Alas, the reality crashes down and we are faced with the facts. In order to make Glaser’s mad dream into reality, we really have to modify these plastic kits. That’s why they are so enticing, and so heartbreaking. The promise is there, but it’s a promise that simply can’t be delivered without a major re-engineering of the plastic kit. 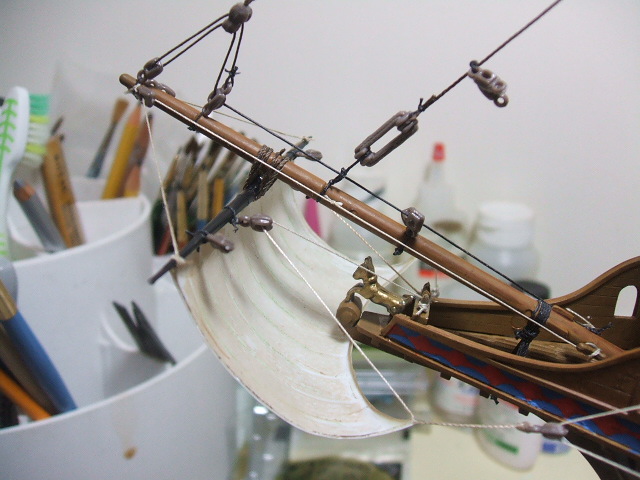 That sail should be hanging down more, and filled with wind to make it billow out like that. The only way to simulate this is to (somehow) rig the sail to the yard so that it extends forward, then pull it back to the correct position with the rigging lines.

Right. And now we will review my billion-dollar stock market techniques.

The fact is that this thing would require a major re-do of the sail to yard “interface.” Something is not right on the Spanish Main, and just putting a little glue on it won’t fix it. I believe the appropriate expression among building professionals is “I was afraid of this.” That’s what you say right before you tell the client that it’s gonna cost a LOT more money.

One possible solution would be to tie numerous threads around the yard, through the sail, and then reinforce with glue. This would strongly attach the sail to the yard and give it the “bounce” that it needs to project properly. BUT the sail is NOT sturdy fabric. It’s wimpy plastic and it WILL disintegrate if all those holes were drilled in it. It started out weak, and fifty years in the dry-dock didn’t help.

Any other solution would involve a super-strong-yet-invisible adhesive that would attach the sail to the yard with a grip of iron. Let’s face another reality. Adhesives suck. I can’t think of one that could really glue these together without looking like the devil. But I’m open to suggestions. 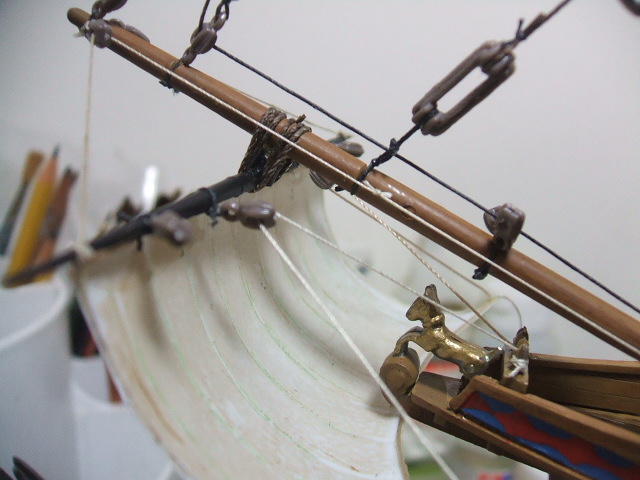 Here’s the deal. This kit was designed to do the impossible–to allow little Timmy to build a first-class model of a sixteenth-century galleon, complete with sails. The fact that this ain’t gonna happen should come as no shock to anybody, even if I’m not little Timmy but a grumpy old man.

Of course, it is possible to avoid the problem by omitting the sails. Much ink has been spilled explaining why sails on model ships are uncool. The real reason that they aren’t installed has to do with physics. It takes a real magician to get the sails to billow in the wind when there is no wind. It’s just another really difficult thing to do properly. Possible–yes–possible. But not something I’m going to attempt now, because I can’t think of a way to do it–and even if I could, it would “bog down” the entire offensive so that I’d have to settle for a negotiated peace treaty.

I want this thing DONE.

So I’ll have the goofy sails. If I could think of any way of getting them to look right that’s actually doable, and not just a wild theory, I’d try it. But I can’t even begin to imagine it. Surely somebody has done this, but not the army of youngsters that Lew Glaser imagined building his ships. Those models had grievous overbites, and this one will too. 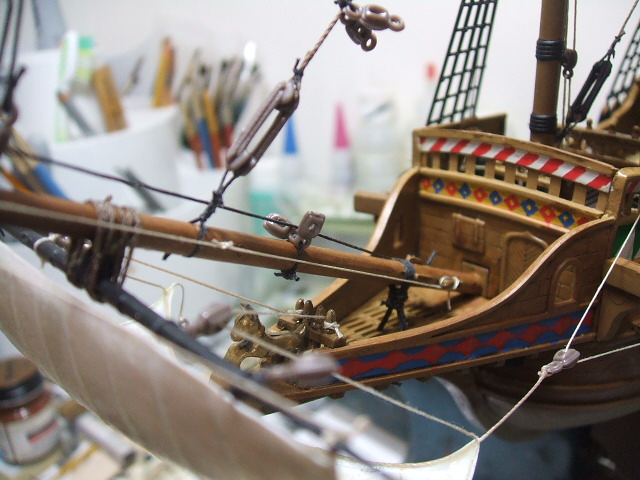